After many comments about shortcomings of motorcycle rally, city council approves the event 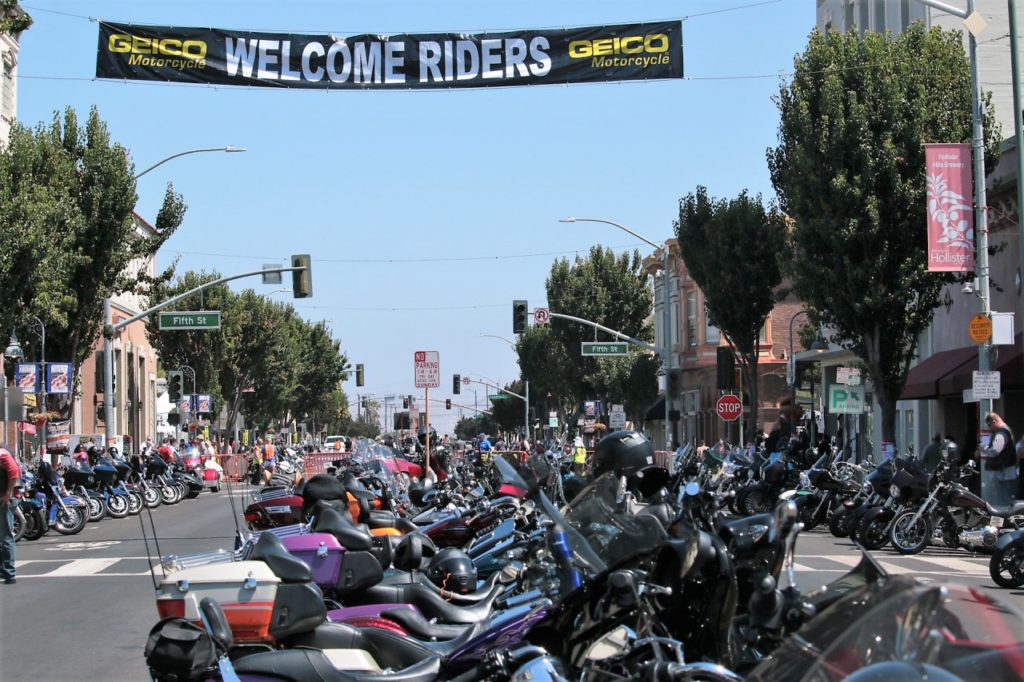 The 2017 Independence Day Motorcycle Rally has a green light to move ahead.

Much to the amazement of many in the crowded Hollister City Council chambers on Dec. 19, and after only two in the audience spoke against holding the rally, the measure passed in a 3-2 vote to accept Reno-based Roadshows Inc. proposal to promote it, even though its president, Randy Burke, offered $16,000 less than what the city wanted.

City Manager Bill Avera passed along Burke’s apology for missing the meeting because of obligations in Reno that prevented him from coming. Avera went on to say that late last week, Burke had made a second counter proposal (the first, $135,000, was rejected at the Dec. 5 meeting) of $164,000. Avera said Burke settled on that figure because it was the city’s actual cost for the 2016 rally. The city has continued to maintain that it requires $180,000 to cover security costs.

“That number of $164,000 is basically what we have spent to-date,” Avera clarified, adding that he did not know how much more in expenditures would be coming in during the following weeks, but thought they would be minor. He went on to discuss the due dates for two payments, explaining that the city wanted them to be paid May 1 and June 1. Burke, however, proposed making the payments June 1 and June 30, which Avera told Burke he could not support. Burke told Avera he understood the city’s concerns and would work on coming up with earlier payments.

“He understands how critical it is for you folks (council) to be able to have a meeting prior to the rally, but after that second payment is due so you can have the option whether or not you’re going to cancel that contract,” he said. “The second option is to cancel the rally and the third option is potentially have the city take it on. I can give you 50 reasons why that’s not the best option, but it’s something that could be considered.”

Avera said the third option would most likely require the city to hire someone with event-planning experience and for the city to take on the responsibility for public safety costs and a myriad of other costs associated with running the mid-summer rally. The city manager said previous promoters claimed they spent between $350,000 and $500,000 on the rallies, and then tried to recoup their expenses and make a profit.

Avera went on to explain the variances of workers’ comp claims, saying that when police come from other areas the city is totally responsible for their workers’ compensation, whereas, Hollister is self-insured when it comes to its own employees.

“We do not have any insurance that covers those (police from other cities) costs,” he said. “Those costs are borne by the General Fund. In the event somebody does get hurt, we could be paying for that for a long time and that could be significant." He said he doesn’t know how much the event helps the city compared to the amount of risk in which it puts the city.

“It is a gamble,” Avera said. “Every year, we pray that nothing bad happens. We’ve been really lucky the last few years, but at some point that luck may just run out. So, for staff, this is purely a policy decision based on the amount you’re going to charge the promoter and whether or not you’re going to even have the rally. I can assure you that our police and fire departments will do everything they can to assure that we have a safe event for our citizens and our guests over that weekend. We will do as directed.”

Before council members made their comments, two audience members, Marty Richman and Tim Burns spoke out against the rally. Richman, who has long been a supporter of the rally, seemed almost crestfallen as he said he could no longer do so.

“My heart’s in it, but my head has to vote ‘no,’” he said. “The liability issues are enormous. There’s been terrible violence with criminal gangs in Nevada and Texas. Nine people were killed (in Texas) and the people in those criminal motorcycle gangs said they don’t care. It’s unfortunate that some bad apples can ruin it for everybody, but they can, and we know that when we have to stand in line for two hours to get on an airplane.”

Richman said he was, however, in favor of an Independence Day parade and inviting local motorcycle clubs, including veterans. He said he had no objection if the city “spread some money downtown among nonprofits because there’s no liability in that.”

Burns, who unsuccessfully ran for a council seat in the November election, came at the issue from an economic point of view, stating that it was his understanding that the city lost $90,000 after the 2015 rally and had yet to collect it from the promoter. He said he did not know if the 2016 rally was profitable or if any promoter of past rallies had donated any monies to local charities.

Burns went on to accuse the council of being less than fiscally responsible with several of their decisions concerning funding nonprofits and unknown costs of studies concerning a fire district. When Mayor Ignacio Velazquez asked him to stay on the subject of the rally, Burns tossed back that the topics were related to the rally in regards to fiscal responsibility.

“At the most recent meeting, Mr. (Roy) Sims voted no on the Olive Festival based on unknown certainties and this (rally) is clearly an unknown," Burns said. "And while it’s not the easy thing to do, I think it (canceling the rally) is a necessary thing to do. At the end of the day, this thing does not pencil out.”

Councilwoman Mickie Luna asked Avera if he could give an example of a workers’ compensation-related incident the city has had to pay. He told her a city employee recently broke his leg and the city has, so far, paid nearly $500,000. Luna then asked about the status of the $90,000 owed to the city by the previous promoter.

“Is that check in the bank?” she asked.

City Counsel Brad Sullivan said that someone had approached a member of the council to settle, but nothing came of it. He said the city has served legal papers on the promoter who then filed a cross-complaint and is suing the city and the Hollister Downtown Association.

Luna’s question about the $90,000 spurred Avera’s recollection of the total offer Burke had offered the city. He apologized for forgetting to mention that Roadshows would be charging each vendor $231 for business licenses.

Councilman Raymond Friend, who has never ceased to support the rallies and is a long-time motorcycle enthusiast, challenged the idea that the city lost money. He said the promoter “bailed on the contract before the rally and the city did not lose money.”

Councilman Roy Sims commented that the city needs to figure out what it intends to accomplish with the rally. He wanted to know what the city has done to create a mechanism that would generate revenue. He said that even though he understood the $16,000 shortfall could be made up with the license permits, he didn’t feel Burke had met the city’s demands.

“We asked for a very specific number that was given to us by (Police) Chief (David) Westrick and that hasn’t necessarily been hit,” Sims said. “This is an Independence (Day) rally and one of the biggest things we might be missing is our service members, those nonprofits, and we kind of have to re-brand it. I understand that motorcycles are probably always going to be part of it. I don’t think that’s a negative, but I think by having a mechanism to gain revenue, we’ll push out the people who don’t want to contribute. Those who come in and will pay those fees are probably going to play nice in the playground because they paid those fees and don’t want to get kicked out or hauled off to jail.”

The mayor said everyone knew that he has supported the rally every year. He said Sims’ comments were important.

“What are we trying to accomplish?” Velazquez stated. “Are we just trying to get people to come out for the weekend? Are we going to promote our community while they’re here?”

He said many of those bikers he has met over the years were successful business people. He said the city has not done a good job promoting itself and has not invited visitors to look at the community as a possibility to bring their businesses there as Corbin Motorcycle had done.

“My issue has always been if we can’t commit to the rally how can the promoter commit to us?” Velazquez said. “In the early 2000s, this was known around the world and was one of the top events in the country. A lot of people made good money back then. But we’ve lost that and I think you’re (Sims) right about rebranding what the rally is about.”

The mayor then reiterated Friend’s contention that the city has not lost money.

“And we can always worry about something happening,” he added. “There’s always a chance of something happening. I have a hard time living that way. We need to embrace it and support it, support the promoter so he succeeds and makes as much money as possible, because then we succeed. If we’re going to stop, again there’s no point in doing this. It makes no sense.”

The city, Velazquez said, should work toward a long-term contract with the promoter as it figures out ways to generate additional revenue. He said he did not want the city to run the rally.

“Government doesn’t do this very well,” he said. “Promoters do this for a reason. They know what they’re doing. The promoter last year did an excellent job. With this new number ($164,000) and the amount we’re collecting from the licenses and permit fees covers the cost, I’m willing to support it.”

Friend made the motion to adopt the resolution to support the rally. Velazquez asked if there was a second. After a long silence, he seconded the motion and for the briefest moment, it looked like he and Friend might be the only supporters because Councilman Karson Klauer had not offered his perspective. When the mayor asked for those in favor of the rally, there were several “ayes,” then Luna and Klauer voted ‘nay,’ but the mayor wasn’t certain of Sims’ vote.