For the first time, the national survey goes to the web; phone and paper surveys will continue. 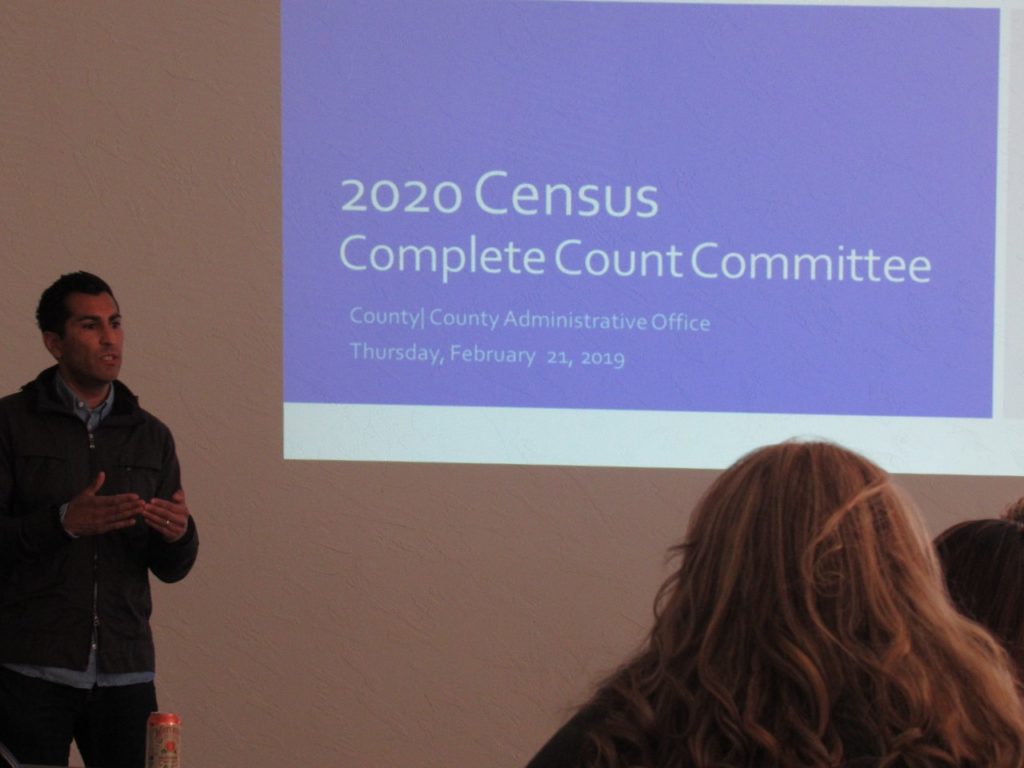 State Assemblyman Robert Rivas speaks about the importance of the census at a Feb. 21 committee meeting. Photo by Noe Magaña. Hoping to advance the collection of accurate numbers for the 2020 Census, the Census Bureau plans to make self-reporting available online for the first time.

The nationwide survey is expected to be available online on March 23, 2020, nine days before the phone and paper versions of the census begin on April 1.

In a Jan. 15 report to the San Benito County Board of Supervisors, Robert Davila, a partnerships specialist with the Census Bureau said the online questionnaire will be available in 12 languages besides English. The phone survey can be taken in 59 languages.

The bureau has begun an educational phase in preparation for next year’s nationwide survey. The effort includes informing and training community and municipal leaders about the importance of the census.

To prevent fraud, Davila said during his presentation to supervisors, residents should confirm that a person soliciting information for the census is wearing a picture identification badge, as well as a safety vest that says “Census.” He also added that phone numbers to local and regional offices will be provided in case residents have questions or concerns.

“We give the count to Congress,” Davila said. “We don’t share any personal information with Congress.”

Since the census is conducted every 10 years, Davila stressed the results will have lasting effects. As a baseline, Davila said San Benito County will get about $2,000 annually per person that is counted, and those funds could be used for various programs in areas like transportation and education. Among the demographic groups most likely to not respond are non-English speakers, non-citizens and landlords who fear tax-evasion penalties, he said.

County Administrative Officer Ray Espinosa said San Benito County has received $75,000 from the state for staff allocation toward completing the census locally, with about $7,500 going to spearhead the Complete Count Committee (CCC).

The committee meets monthly to develop a strategic plan for obtaining the most complete and accurate results, which is a prerequisite for the county to receive state funds to reach hard-to-count areas.

According to the training manual given to the CCC members in their first meeting on Feb. 21, the census data is used for distribution of federal funds to tribal, state and local governments, redistricting state legislative districts and forecasting transportation needs.

During the first CCC meeting, which was led by county management analyst Dulce Alonso, about 30 community members attended, as well as San Benito County and Hollister officials and State Assemblyman Robert Rivas.

Rivas gave a brief speech in which he attacked the census question that asks if an individual is a citizen.

“The citizen question is a way to intimidate and put fear in people that don’t come out and stand and say ‘Hey, I am here.’ They may be here illegally, but they still need to be counted,” Rivas said.

During the meeting, Tory Del Favero, a partnerships specialist with the Census Bureau, said the state will disburse about $76 billion per year as a result of data collected in the census.

“The money is going to go out and will go somewhere,” Del Favero said. “We want to make sure San Benito County is getting its fair share.”