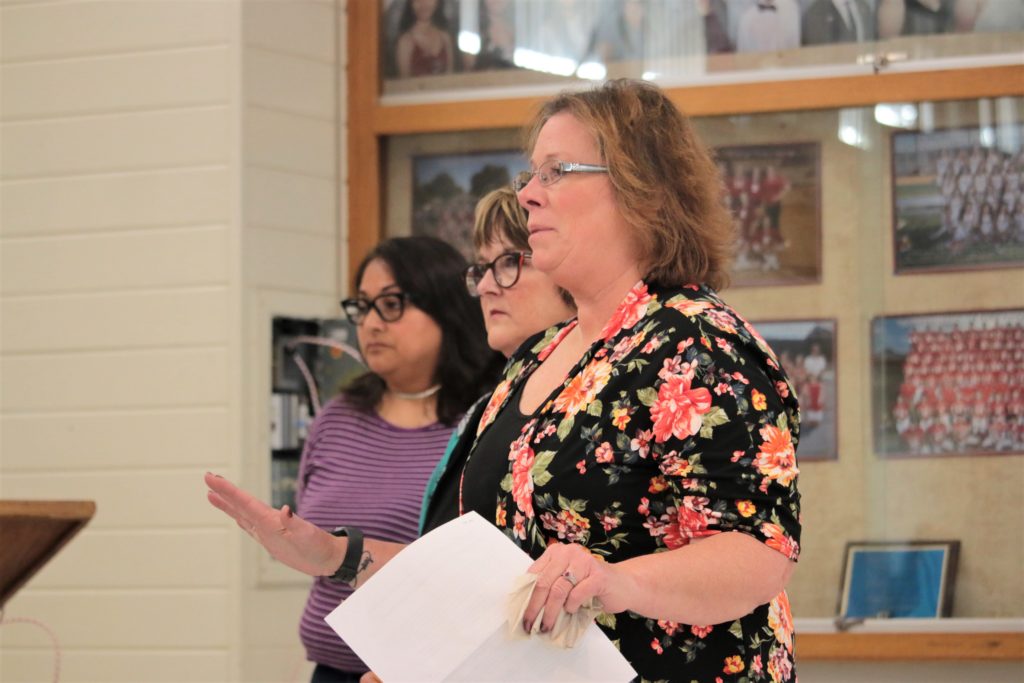 Parent Susan Villa, education advocate Kim Taylor and parent Virginia Gardner told the San Benito High School Board of Trustees that they filed reports to the police after receiving an anonymous letter alleging inappropriate sexual language and video images in a classroom, as well as bullying and retaliation against an aide. Photo by John Chadwell.
×

Education advocate Kim Taylor and two parents of special education students gave emotional speeches to the San Benito High School Board of Trustees at its June 25 meeting. The speeches focused on the board’s apparent inaction related to accusations made in two anonymous letters alleging inappropriate sexual language and video images in a classroom, as well as bullying and retaliation against an aide.

Taylor provided a copy of the second anonymous letter dated June 4 to BenitoLink and claimed she did not know who the writer was. She told the board that on June 19, two families of special education students at San Benito High School contacted her regarding the letter. She said she had learned that two additional families also received the letter and that all of the parents were concerned about allegations that the writer made against SBHS staff, a teacher, several aides and Superintendent Shawn Tennenbaum.

The anonymous writer claimed to have written a letter in December 2018 and sent it to program specialist Cassandra Guerrero, Human Resources Director Cindi Krakower and the entire board.

“I had to come forward at least with a second letter to address some of what is concerning,” the second letter said, noting that no apparent action had been taken. “I am hoping that parents will look into this. An outside agency needs to look into these incidents.”

Taylor said after reading the second letter she contacted Disability Rights California, which directed her to call Child Welfare Services (CWS). Taylor said CWS determined that a criminal investigation was warranted and directed her to the Hollister Police Department.

Taylor told the board that she met with several families and accompanied them to speak with Detective Bo Leland at the Hollister Police Department, and that he opened an investigation into the matter. Leland told BenitoLink that he could not comment on an ongoing investigation.

Taylor said she also contacted the complaint unit for the special education division of the California Department of Education (CDOE).

“Due to the serious nature of the allegations, the protocol changed and rather than file a complaint to the district, it was recommended I file the complaint through CDOE,” Taylor told the board. “The allegations in the letter are serious and based on the information, I believe you had multiple opportunities to investigate and remedy this situation without having to bring this to a public meeting and file a complaint with CDOE.”

Hollister resident Virginia Gardner also spoke at the meeting. She said her son is a non-verbal student in the Life Skills class (mentioned in the letter) and she was concerned about his physical and mental health. She said she received the anonymous letter on June 11, but even prior to that her son often came home and repeated what she said were inappropriate words. She said she was concerned after learning that her son’s aide was being replaced.

“According to the letter, my son’s aide was instrumental in reporting incidents to the San Benito administration, which she witnessed in the classroom,” Gardner said, “and in light of her being moved it looks more like retaliation than change.”

She said she told the administration that it was important for her autistic son to remain with his aide, but felt her concerns did not matter.

“Obviously, the claims made in the letter are beyond disturbing,” Gardner said. “How can my son, or any other child, continue to learn and grow in a hostile environment? Why are our children being exposed to explicit adult content? How can the administration continue to ignore the liability issue?”

Gardner said another concern of hers is the administration’s internal clique that does not hold staff accountable for classroom conduct, and the decision to be “deliberately indifferent while others are being bullied for reporting incidents.”

She continued: “This conduct constitutes corruption of the role of administration and does enormous damage to students, colleagues, and the public’s faith in San Benito High School. There is a sense of powerlessness and inability to get anything done. Why is this one specific individual, which I will not publicly name, still being employed at San Benito High School? She has no business working with the disabled. She said, ‘Our children are too stupid to understand what is going on.’”

Susan Villa was another parent who spoke at the June 25 school board meeting. She said when she received the letter it upset her so much that she became ill. Choking back her words, she told the board how the letter affected her.

“I was one of the biggest advocates of this school and spoke all the time about the special ed department and the transition programs,” Villa said. “What a fool I’ve been. How dare you allow this conduct in a classroom.”

She said the board did not have to tell her the details of an investigation, but claimed she has heard nothing.

“Where’s your moral compass?” she said. “You could at least have the common courtesy to say there’s an investigation and the decency to let us know what’s going on in our childrens’ classrooms.”

She said she wanted the board to know that parents have filed reports at the police department and with CDOE.

“This is not going away,” Villa said. “The Pandora’s Box has been opened and it’s not going to be shut without a fight. You have no idea of the heartache that we as parents and our children are going through.”

Taylor told BenitoLink that she was satisfied that the letter is truthful after talking to several people who work at the school and confirmed the allegations.

Superintendent Shawn Tennenbaum told BenitoLink that neither he nor the Board of Trustees could respond to the comments because the matter potentially involves confidential student and personnel issues. He did say the board and the administration take the matter seriously and will respond appropriately.

“Each day, San Benito High School District and our greater school community provides all students with the highest level of care, support, and dedication,” he said. “This level of commitment is achieved on campus and in the community and success within our Special Education Program has been recognized by both internal and external stakeholders.” 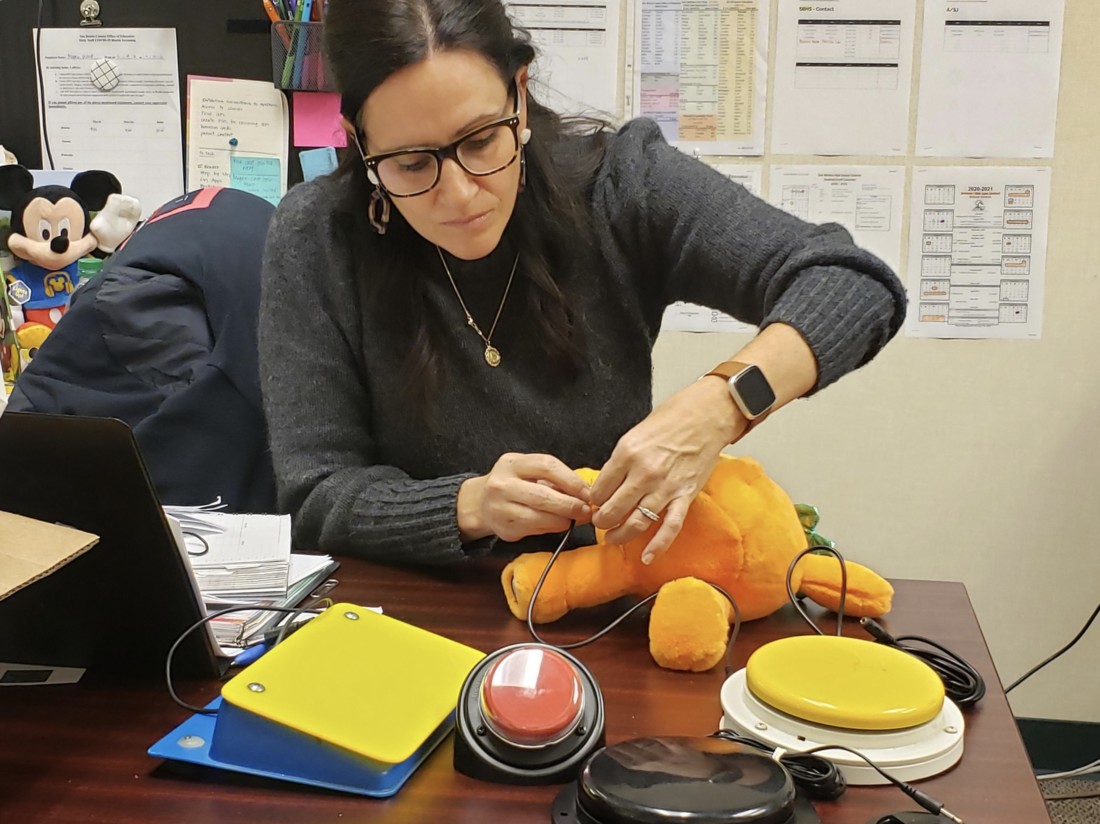 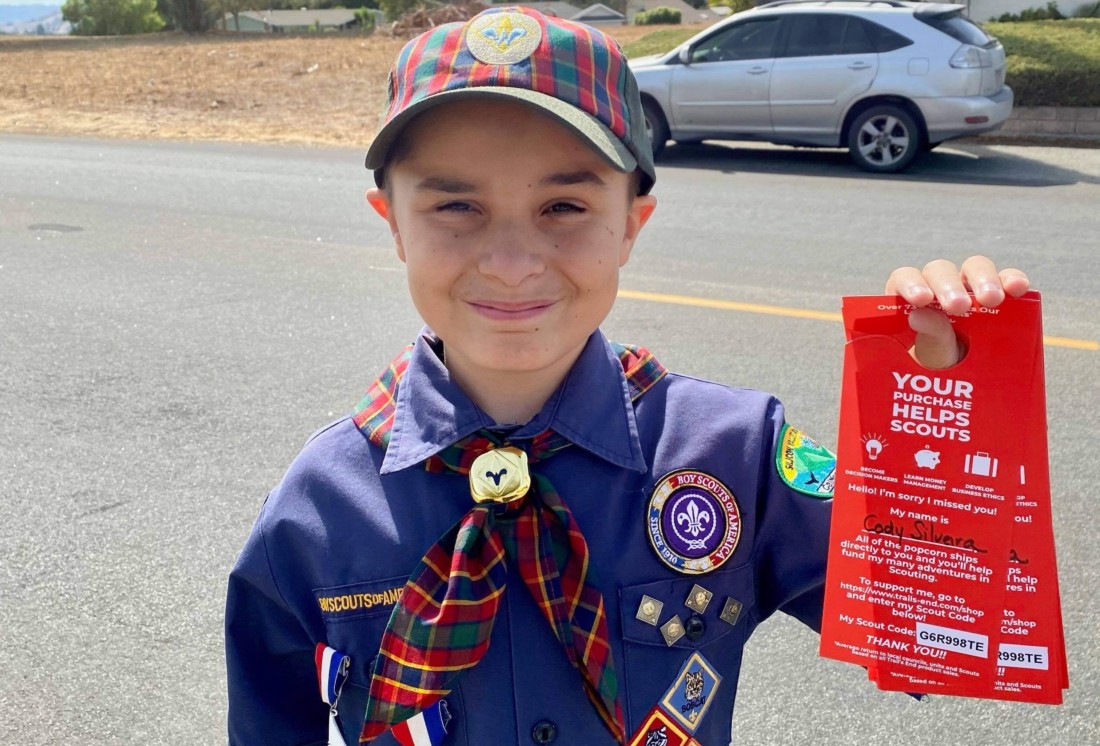 A new approach brings three weeks of activities for scout troops and guests.