Catherine Booth-Vaughan writes about her first experience at a Hollister City Council meeting. 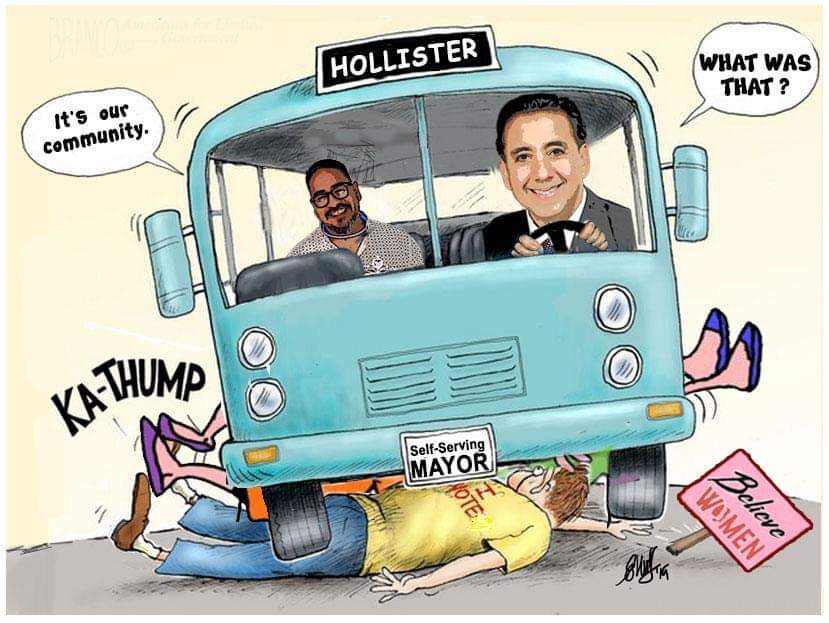 This community opinion was contributed by resident Catherine Booth-Vaughan. The opinions expressed do not necessarily represent BenitoLink or other affiliated contributors.

On Nov. 4, the Hollister City Council brought to the floor a vote to hire Paul Eckert, for City Manager Bill Avera is retiring after being named manager in 2013. Members of the community, including myself, researched Mr. Eckert’s background after reading a “What’s going on in Hollister” Facebook post that stated Sioux City, Iowa had settled a $1.3 million sexual harassment/retaliation lawsuit against Mr. Eckert and the city. After reading many articles and the published court documents, I contacted the Mayor to express that I thought it was a bad idea to bring Mr. Eckert to Hollister with these allegations and this cloud over his head. $1.3 million dollars was a substantial payout for the city of Sioux City, Iowa.

The Mayor responded, “Catherine, again if I thought he was some kind of predator I would not support him. The accusation came several years after the alleged incident when layoffs were happening in that city. If I thought for one second that this was a person that harassed people there is no way he would be offered a position. I tell everyone the works for me same thing, if I hear of any discrimination – sexual, racial, age or religion, I will come after them. I checked with the current Police Chief, Mayor and others that work at the current city where he works and everyone has clearly told me that nothing like the accusation that was made has ever happened at their city.”

A little background on me: I moved to Hollister nine years ago from Baltimore, Maryland. I had never been to a city council meeting—ever. That is until Nov. 4. I called friends and reached out to the community to see if anyone else was going to protest the vote. We met, made signs and showed up at city hall. When they asked for public comments a couple of us spoke up with our voices in protest of the vote. It was truly a grassroots effort.

To their credit, the members voted 4-1 to offer an interim position until a more thorough investigation and background check could be conducted. Honor Spencer was a no-confidence vote.

We left the council meeting frustrated, but satisfied that there would be due diligence in a thorough background check and investigation into the facts, by a reputable company versus the Mayor making a couple of calls to Eckert’s current employer.

Nine days later, a “special council meeting” was scheduled on Nov. 13. Again, I reached out to the community of Hollister, we made signs and attended the meeting in protest of the hire. During public comments, we spoke to the council, and to the Mayor directly. I asked the Mayor to think of the message he would be sending to the employees of Hollister. The message that he believes Mr. Eckert, and not the women (plural) who spoke out about the harassment and retaliation. One of whom lost her health insurance  because she was demoted in retaliation for answering questions in a separate investigation regarding Mr. Eckert.

The council spent two hours in a closed door meeting before coming out to end the session. We walked away not knowing what happened, that is until the local news media reported that Eckert was submitting his resignation. The council went on to approve a $25,000 severance payment to Mr. Eckert 3-2. The Mayor takes no blame in the waste of the $25,000 severance pay. Mr. Eckert worked as interim manager for eight days.

Subsequently, Mayor Ignacio Velazquez released Mr. Eckert’s resignation letter to the press, and also posted it on the “What’s going on in Hollister” Facebook page, with over 15,000 followers. He seemed to encourage Mr. Eckert’s threats to sue the members of the community who spoke against his employment. The Mayor, in many Facebook posts over the last few weeks, went on to accuse us—his constituents, the community—of being influenced by outside special interests groups. He has accused his community of slander against Mr. Eckert while still praising and defending the man who settled a $1.3 million dollar sexual harassment/retaliation lawsuit. The Mayor was not and still is not listening to his voters. We want Hollister to move forward. We want women to be believed. We don’t want Hollister to be put in a position where it may have to settle future harassment lawsuits. We want our Hollister employees to feel safe in their work environment. We want the Mayor to protect the community, not to drive the bus over the people who put him in office. Because in the end, it’s the community who has a voice. In the end our voices were heard by Council members Lenoir, Spencer and Richman. All who apologized for the lack of transparency and oversight in the hiring process. Unfortunately, the Mayor and Council member Rolan Resendiz continue their manipulation of the facts on their many social media posts. They continue to drive the narrative that the community is wrong.

Unfortunately, this is just another example of poor leadership in a city that has so much to look forward to in its future, including a new Mayor in 2020.