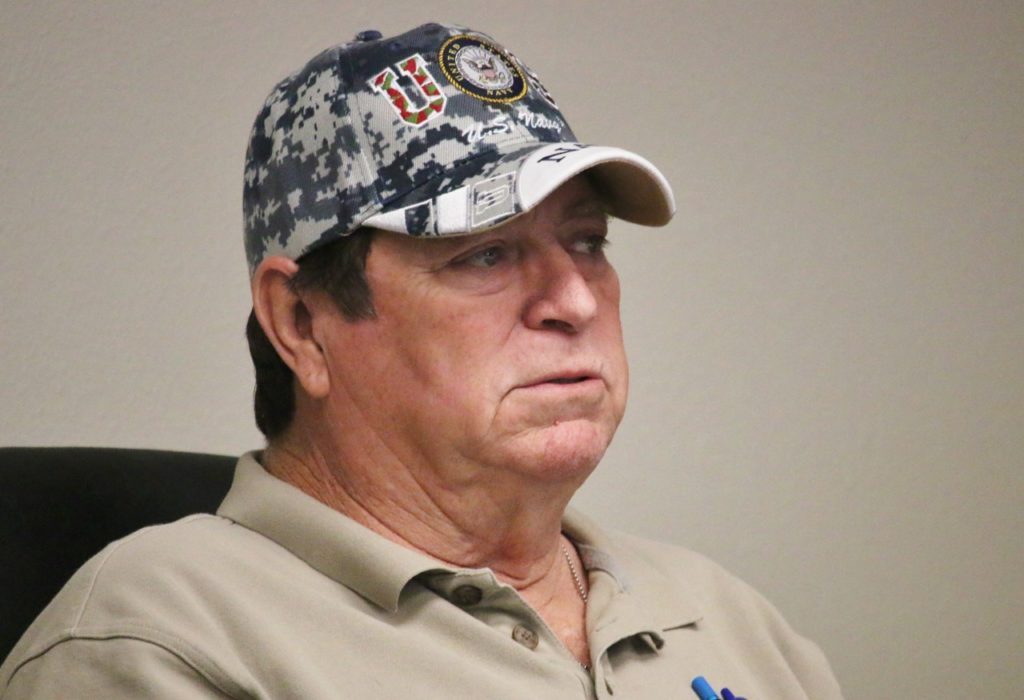 The Hollister City Council received a report during a May 24 special meeting from the ad hoc committee, comprised of council members Raymond Friend and Karson Klauer, for an ordinance on medical marijuana administration regulations and one to provide for the cultivation, dispensing and manufacturing processes in order to provide input for medicinal marijuana businesses.

During the meeting, council members and the public discussed concerns and made recommendations ahead of the expected statewide legalization of marijuana in November. City Manager Bill Avera said the purpose of the meeting was to discuss components of the draft ordinance that Klauer and Friend, along with legal counsel Brad Sullivan, had spent several months drafting.

Mayor Ignacio Velazquez asked attorney Aaron Johnson if the state passes legislation in November to legalize medical marijuana before the city has its own ordinance, does the city have to follow suit with the state. Johnson said three bills dealing with marijuana that passed the state Assembly and Senate Sept. 11, 2015, provide the framework for medical marijuana, but was also anticipating the approval of recreational marijuana.

“If California votes to approve that initiative, not much will change at the local level,” Johnson said. “Local approval is required. Local control is required. If you want to open it up to cultivation and dispensing, you can do that. If you want to restrict it, you can do that. The state is not going to come in and tell Hollister what it should do.”

He said the Bureau of Medical Marijuana Regulation is in the process of implementing, drafting and promulgating those regulations and that a city ordinance would not require many changes if recreational use is approved statewide.

Friend asked Johnson if cities that have restrictions on sales within city limits will have to change their ordinances. Johnson said cities will not be forced to sell marijuana, but he said if a jurisdiction took no action, an applicant who wants to open a marijuana-related business would have to go to the state.

“You do want to exercise control over this,” the attorney Johnson recommended.

The mayor questioned whether the city could determine a minimum wage for anyone working in the marijuana industry. Johnson said it would be unique for a city to get involved in minimum wage issues and may overstep state laws.

Sullivan said he was not sure it was a power that the state had conferred on cities. He said it would be open to discussion in a development agreement and that the city should be careful about mandating something that may be negotiated voluntarily in a development agreement. Velazquez said that if the industry is inevitable why not try to ensure jobs within it pay well and offer health insurance?

The mayor also wanted to know if there is some way to assure that the point-of-sale remains within the community rather than be distributed elsewhere, with the possible loss of sales taxes. Johnson said it was possible to adopt a tax on cultivation, but cautioned against treating local distribution differently than outside distribution because of equal protection laws and constitutional issues. He said the ordinance already requires “track and trace of cannabis” from cloning of seeds all the way through sales. The mayor said he just wanted to make sure that marijuana was not grown locally and shipped elsewhere, which would prevent revenues from coming back to the community. He asked what could be done to guarantee maximum tax potential. Johnson said the city could devise a tax structure determined by gross receipts or square footage, which he said would have to be approved by voters.

Klauer said he would like to allow a person to grow, cultivate, manufacture and sell at a single location if they have all the required permits. Sullivan said he had previously omitted that stipulation and added it back in another draft, but in the confusion of having too many versions of the ordinance, may have sent the wrong one back to the council.

Keith Snow was the first to speak up during the public comment period, stating that he thought the city should receive 20 percent in sales taxes from cultivation and 15 percent for distribution. Local resident Taylor Rodriguez showed up with two consultants from Cannagroup, Inc., and his dad in a bid to open a business as a marijuana entrepreneur. The first consultant, Will Skaarup, who handles public affairs for the firm, ticked off his own bona fides as an advisor in government service before extolling his young client's finer qualities, including growing up in Hollister, and having a business degree.

“They would like to be one of your applicants, quite frankly,” Skaarup said, “and my job, and my colleague’s job, is to make sure his application is given just as much weight as the outsiders that may come to your community. He did his homework, clearly, because he chose our firm to represent him.”

Skaarup reminded the council members that they’re new to the cannabis industry and he’s ready to help dispel any misconceptions, prefacing his opinion with, “There are (misconceptions) among many politicians and elected officials with things you read on the Internet. We understand you have an obligation to separate the good players from the bad.”

Rodriguez followed Skaarup's introductory comments by saying he graduated with honors in business administration from CSU Monterey Bay. He said he has returned to Hollister to achieve his personal goal as an entrepreneur and wants to serve the thousands of medical cannabis patients who currently have to drive 45 minutes to pick up their medicine.

“It is my goal to serve these patients and the community by providing a transparent, honest, and community-oriented dispensary, which will be named, Haven,” he recited. “Haven will be a great relief for the under-served medical cannabis patients of Hollister, and will bring tax revenue to the city as a whole.”

Rodriguez was followed by Luke Bruner, policy consultant for the same firm, who said rural areas have a need of cannabis dispensaries. He said there are some issues with the draft ordinance and it was obvious people put a lot of time in it, but said fees were a concern of his clients. He said Hollister, which he said had a "brain-drain," could benefit from being friendly and receptive to young entrepreneurs.

He added that patients need clean product and that if someone is 18 to 21 they can’t even legally obtain cannabis without a caregiver. Rodriguez's father, Brent, said he was proud of his son and will be backing him financially if he gives back to the community.

Lobbyist Sean Donahoe, who often speaks on cannabis legislation, said Oakland recently passed its ordinance, which he said is more comprehensive than Hollister’s, and included some points that the city might want to consider adding to its own ordinance. He said there are two interesting state bills regarding medical marijuana going through the legislature, one of which includes a specific dollar amount that is taken out at the distributor stage that funds local law enforcement.

“It has a very clean pathway for taxes on medical to segue into taxes on adult-use sales,” Donahoe said, added that there is a perception that there is an extreme tax potential to be had from marijuana sales, but that isn’t the case, he warned, because the federal government taxes liability on marijuana ranging from 70 to 80 percent because they’re paying taxes on gross sales and not being able to deduct normal business expenses.

“Until these businesses are rescheduled at the federal level, they are going to be truly hampered,” he said. “Perhaps the fee structure should be looked at differently so small- and medium-sized businesses can set up shop in Hollister.”

Donahoe added that the governor’s main budget revised language  includes new information that will make it easier at the local level to implement cannabis operations, and will become law in about three weeks.

Steve Ludwick, a business owner in Hollister, said the fee structure favors big businesses. He gave the example that the fee structure includes a $60,758 fee for cultivation, regardless of size, as well as a fee of $15 to $20 per square foot for a facility, which is in addition of the other fees.

“If you do the math and you have a 3,000-square-foot building, you’re talking about $128,000 in fees,” he said. “This makes it extremely difficult to even start. I would like to come in and do business here, but I don’t see how that is fair. I would encourage the council to take a closer look at the fee structure by looking at other jurisdiction, such as Oakland, which had a structure very similar to this and they restructured it so it was fair.”

Councilman Victor Gomez said he had only received the ordinance the day before and questioned why there was language about nonprofits in the ordinance. Johnson said the term was actually, “not for profit” and said there should be a legal opinion from the attorney general’s office before possibly changing the model to a for-profit model. Gomez wanted to be sure that the police department was included in any further discussions about the ordinance.

Friend agreed that the council needed to wait until the attorney general weighed in before implementing the ordinance and that the fee structure needs to be addressed in order to be more fair to small businesses.

Councilwoman Mickie Luna wondered how much liability the city might face. The mayor cautioned again against moving too fast before all aspects of the cannabis industry were known. He also said there needs to be more public input, as well as hearing what law enforcement has to say.

Klauer said his first concern was to have cost recovery for the city, and said the potential was huge as far as jobs for the city, but he cautioned, “Every day that we don’t have something in place is another day that these guys could going some other place and setting up shop in another county.”