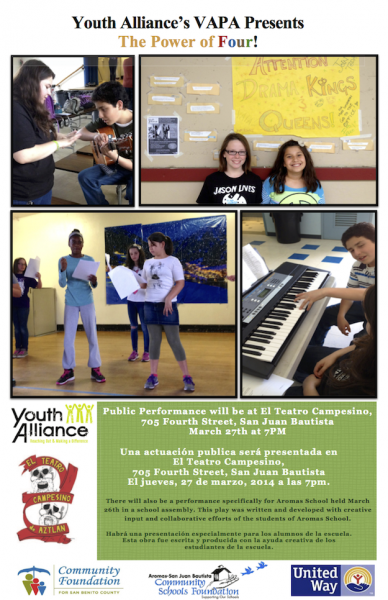 Youth Alliance Producer Greg Smith leads a company of adult staff who have worked with Aromas School children who came up with the basic theme, workshopped the show, and gave input, which was then assembled by Director Joe Luis Cedillo.  Other production team members are Vivian Castillo, serving as the Musical Director and Ryan Terry, as the Technical Director.

The students worked over a ? month period to create the play and performance.

Performance will be a 30 minute long environmentally-themed children’s production including two songs.

This will be the only public performance of the Aromas students at the El Teatro Campesino in San Juan Bautista. The play was also performed at a school assembly at Aromas Elementary School on March 26.

On May 22, students from San Juan Elementary School will be performing the play they have created with the Youth Alliance team.