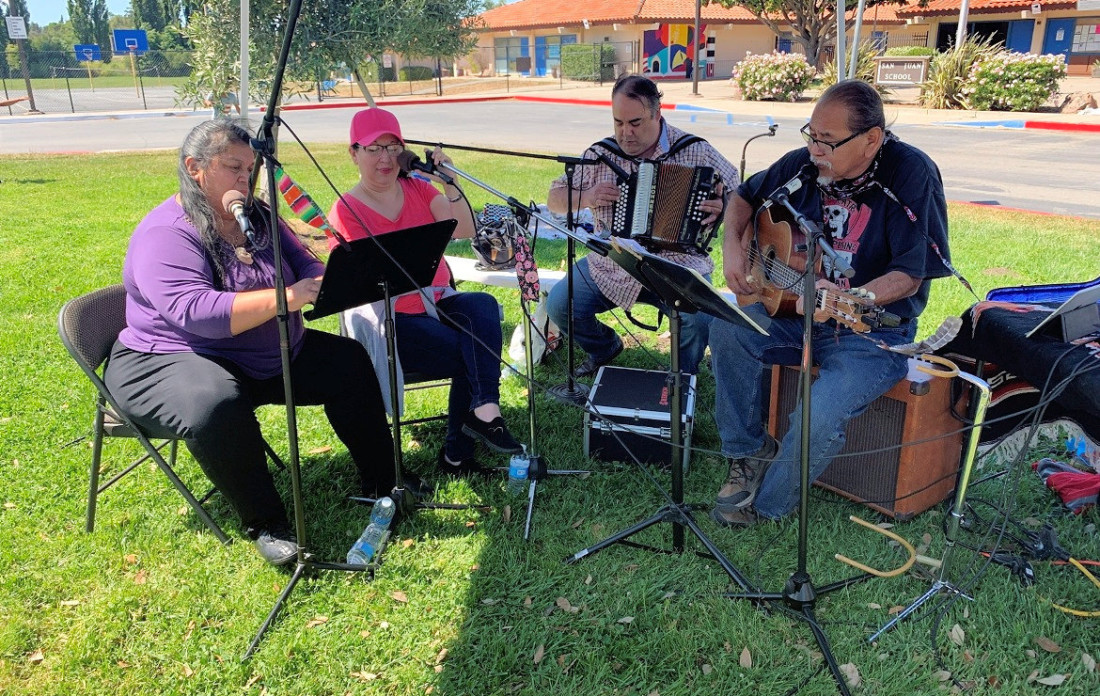 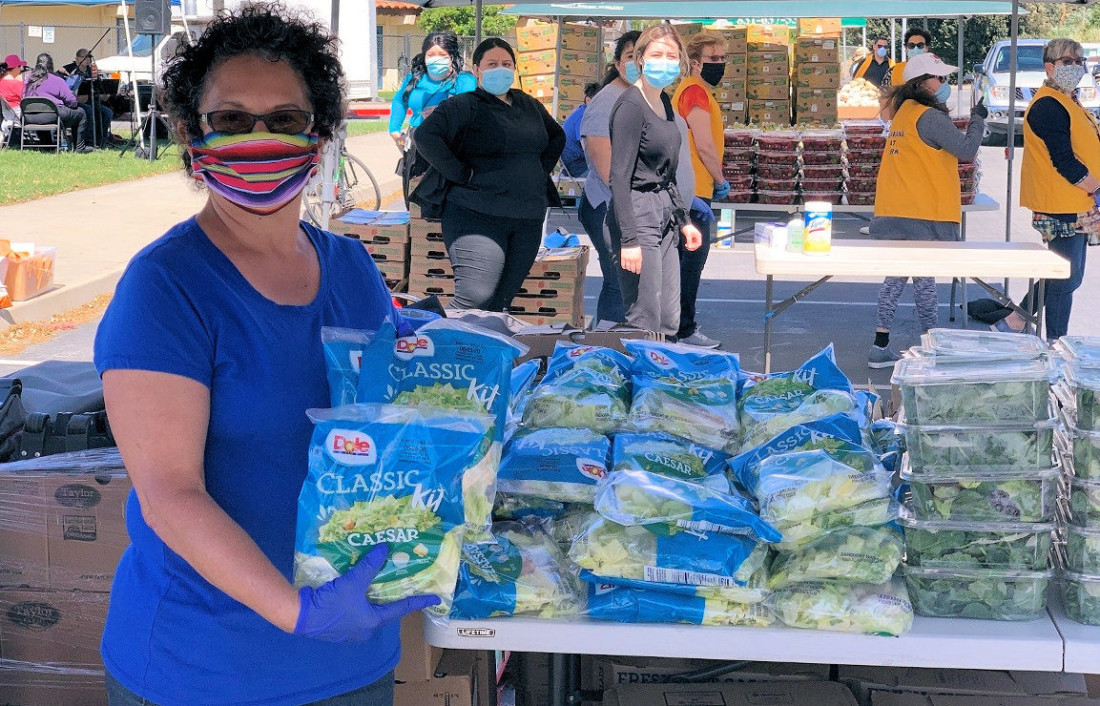 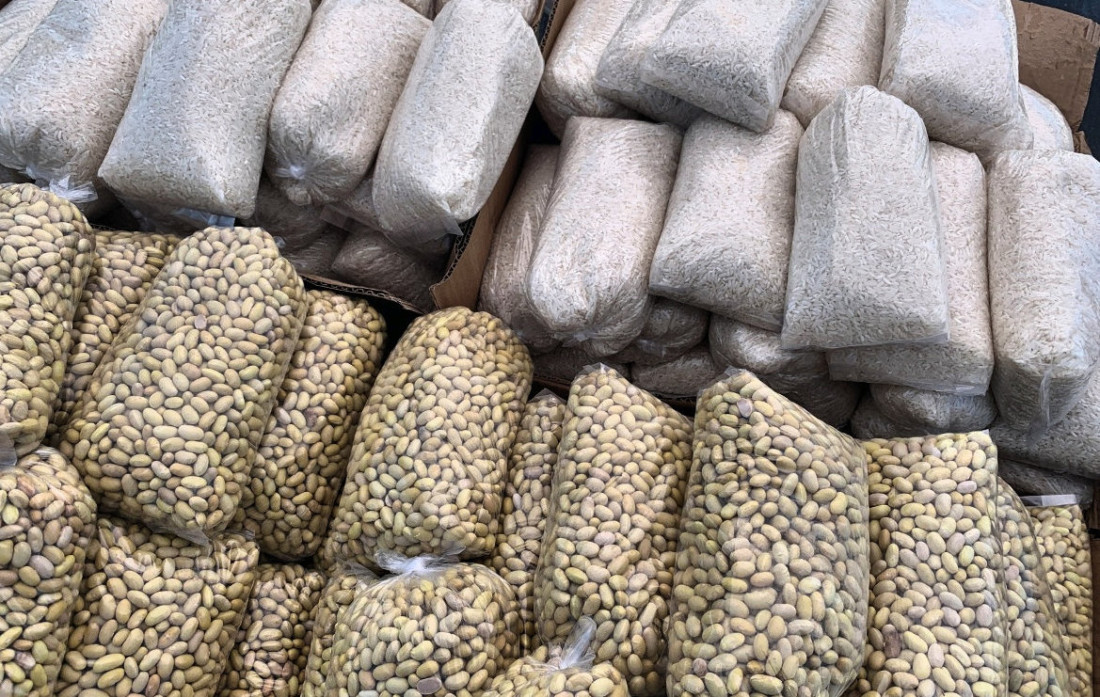 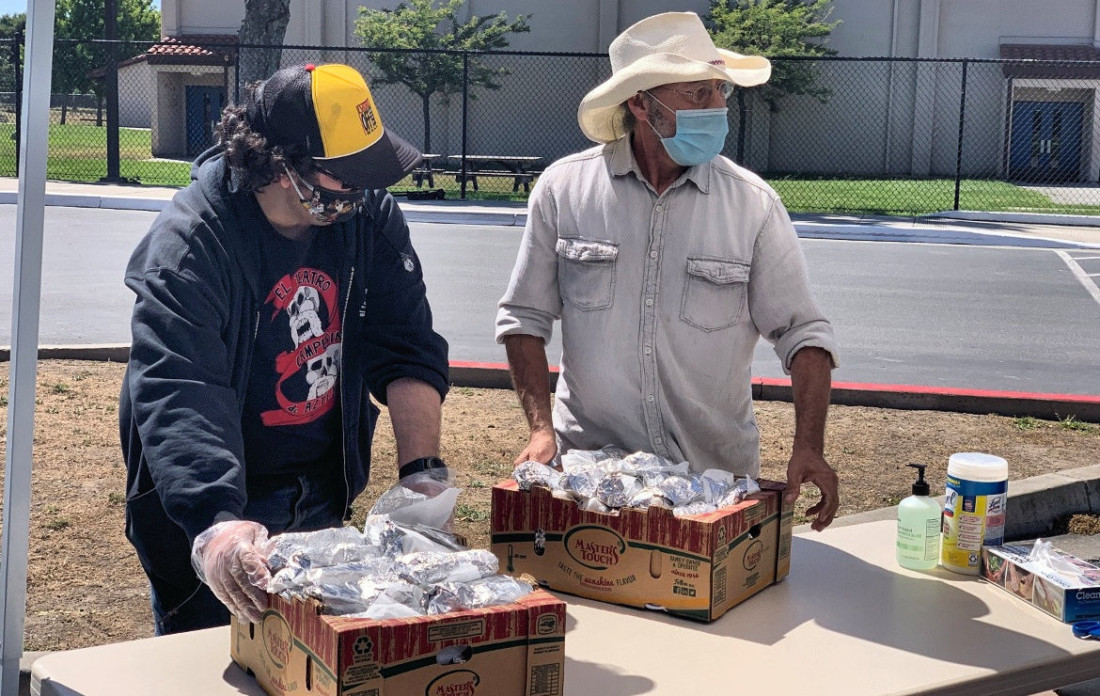 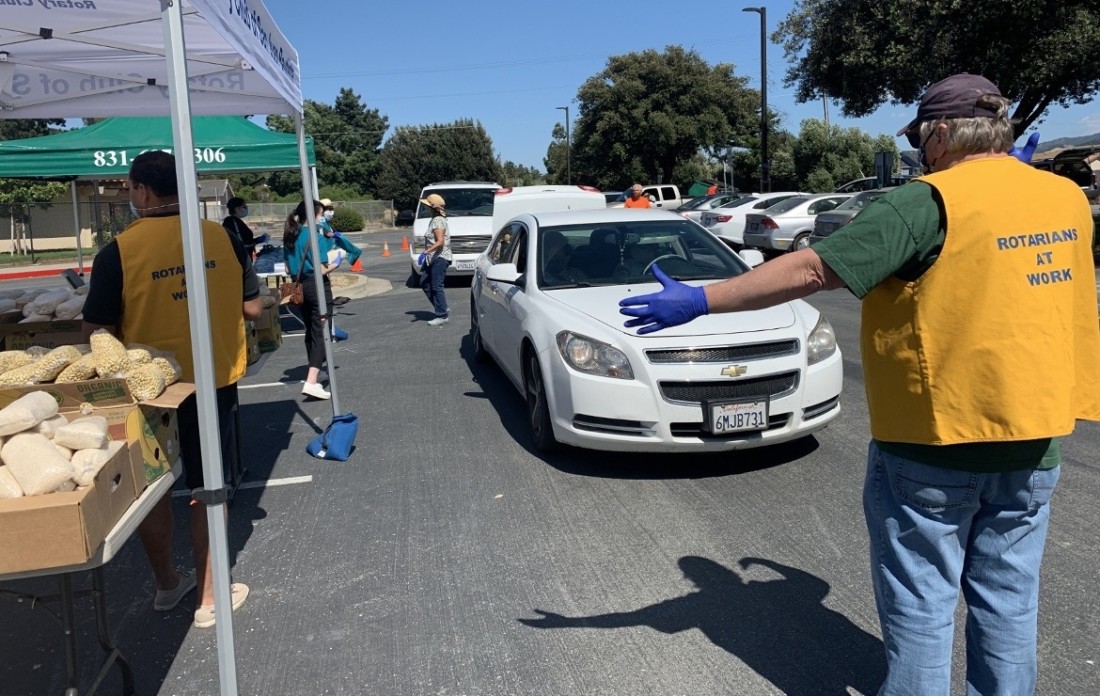 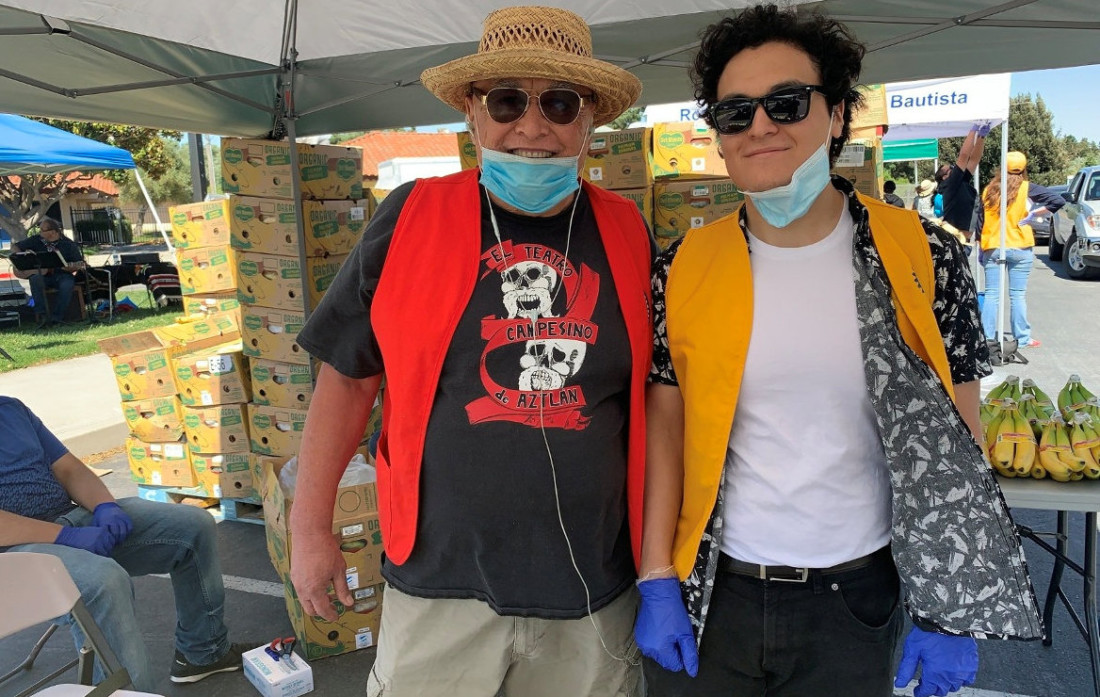 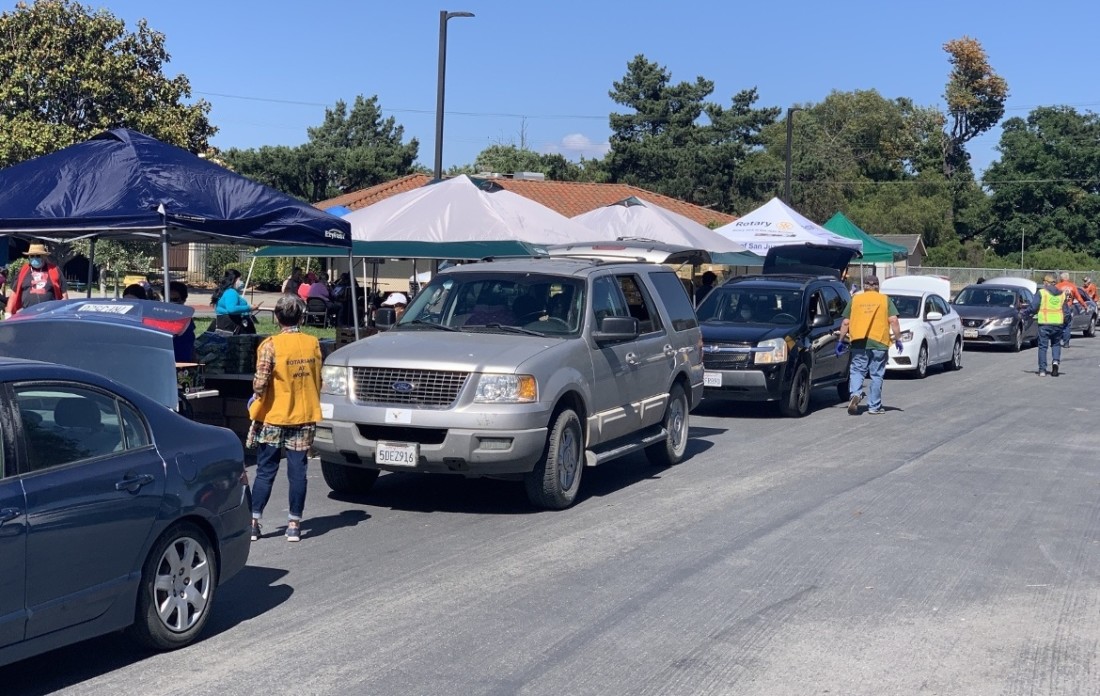 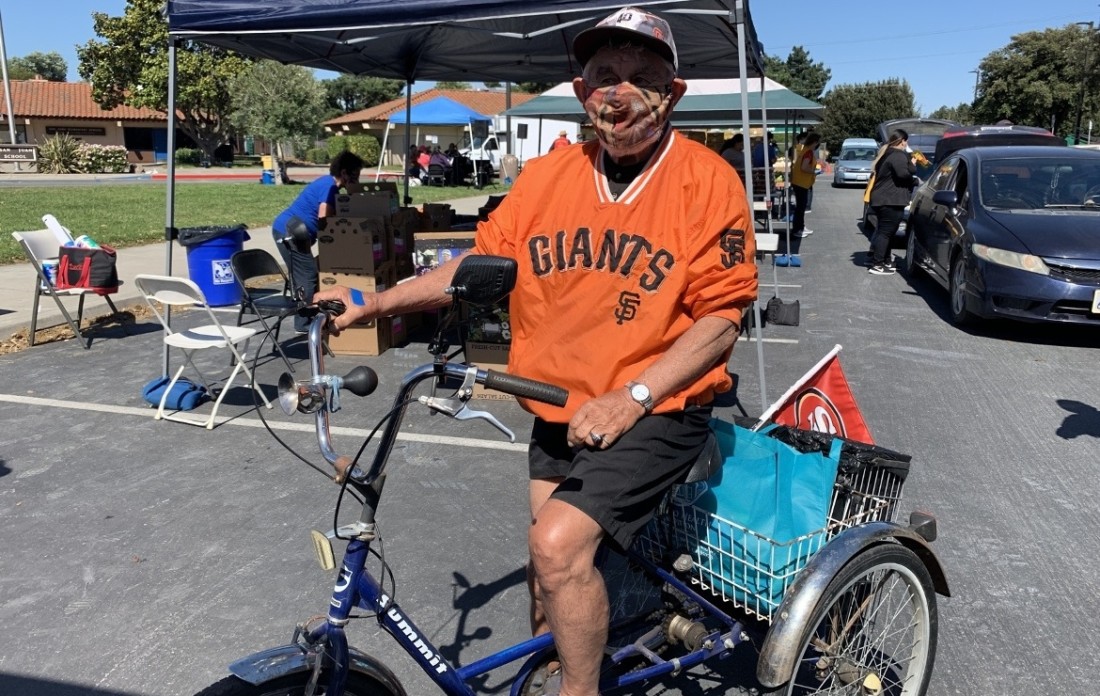 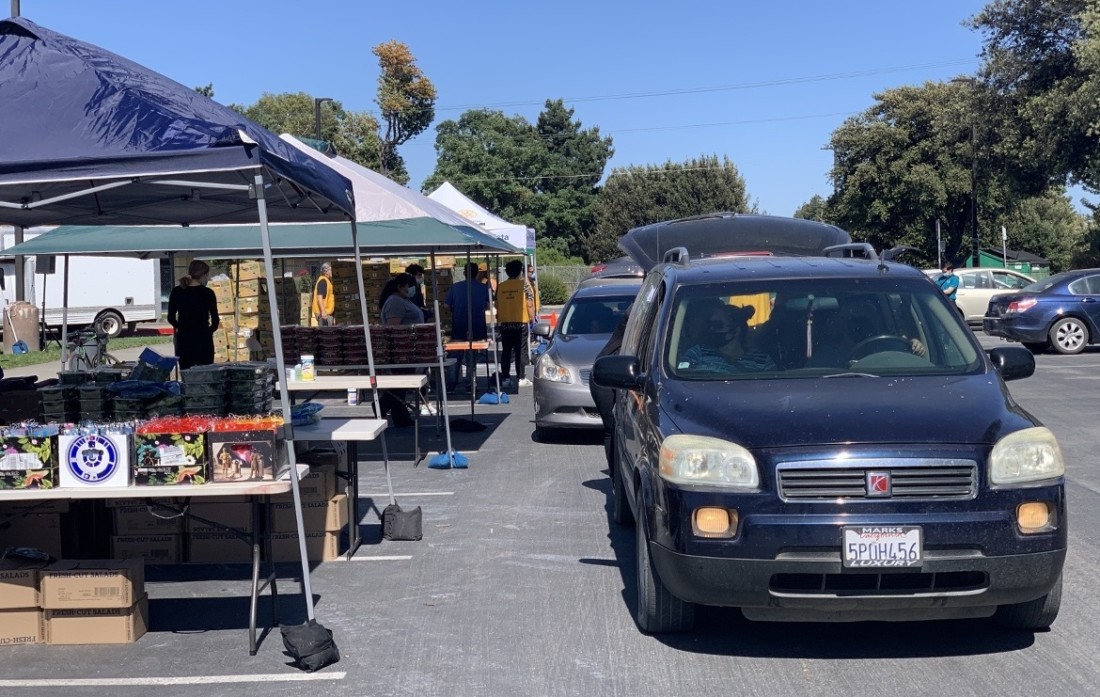 Families in line at the June 13 relief drive in San Juan Bautista. Photo by Robert Eliason.

As musicians with El Teatro Campesino played and Noe Montoya sang “There’s No Tortillas” to the tune of “O Sole Mio,” members of the San Juan Bautista Rotary Club and community volunteers handed out donated food and goods to farmworkers who formed a line of cars stretching out of the San Juan School parking lot.

On June 13, El Teatro, the Rotary Club, the San Benito Health Foundation and the Aromas-San Juan Bautista Unified School District held “Feed the Frontline,” a drive-thru event which provided local farmworkers and their families with groceries as way to recognize their essential labor during the pandemic. They received fruits and produce, as well as some staples and everyday items. Donations and labor came from Taylor Farms, Hollister Super, Dole Food Company, El Teatro Campesino, United Farm Workers, Mission Cafe, Driscoll’s and others.

“We started yesterday and Supervisor Anthony Botelho brought a forklift over to help unpack the 40-foot truck, which was a godsend,” said El Teatro Campesino veteran and labor organizer Phil Esparza, who also helped out at a farmworker relief drive in May. “But everything is going well and it is a good reflection of who we are as a community.”

Organizers said they were able to provide these goods to an estimated 860 people who came in 215 cars. Whatever donations remained were taken to the migrant camps or San Benito Health Foundation patients.

“This event is to honor those who may have been overlooked,” said San Benito Health Foundation President Rosa Fernandez. “These are the people who continued to work to provide food during the start of the farming season. In the initial stages of the virus, the benefits that were awarded to others were not available to farmworkers.”

Fernandez and the Rotary Club have experience with similar programs; the club’s Family Giving project raised over $5,000 last year to help needy families, and Fernandez is also club president.

“This became an extension of what we are doing already,” Rotary Club Secretary Vicki Morris said. “We have the volunteers and programs already in place to make this kind of thing work.”

A steady stream of cars arrived at 4 p.m. and continued for two hours. As each car came to the front of the line, volunteers handed out reusable grocery bags and cloth masks before bringing bananas, strawberries, mixed greens, rice, beans, water, new toothbrushes and other donated items—ending with warm burritos from Mission Cafe.

As the music played and the volunteers sweated in the afternoon sun, the generosity of the local community left smiles on the faces of the frontline workers and others in need.

“It’s awesome,” said Donald Lingo. “I’m 77. I’m not dead yet but I don’t get around much. I don’t drive and I just have my bike. If you have to stay at home, there is nothing wrong with somebody helping you.” 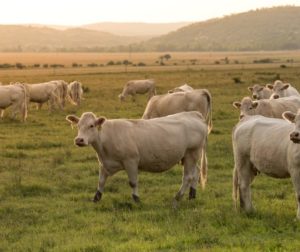 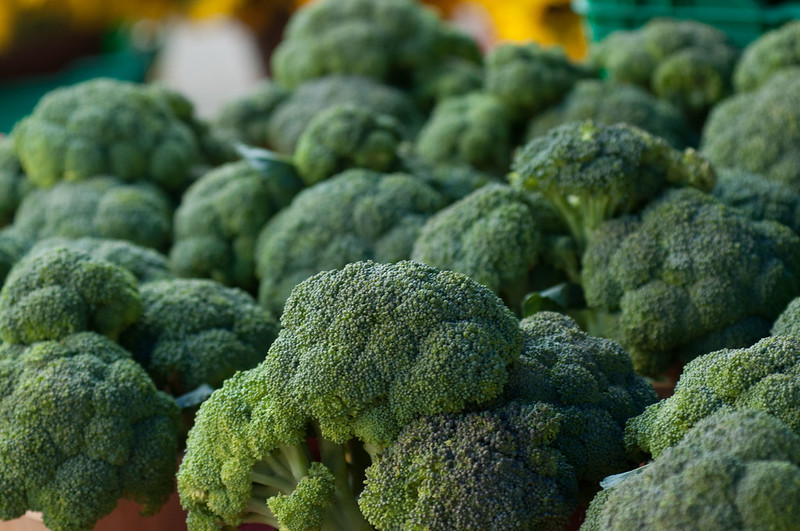