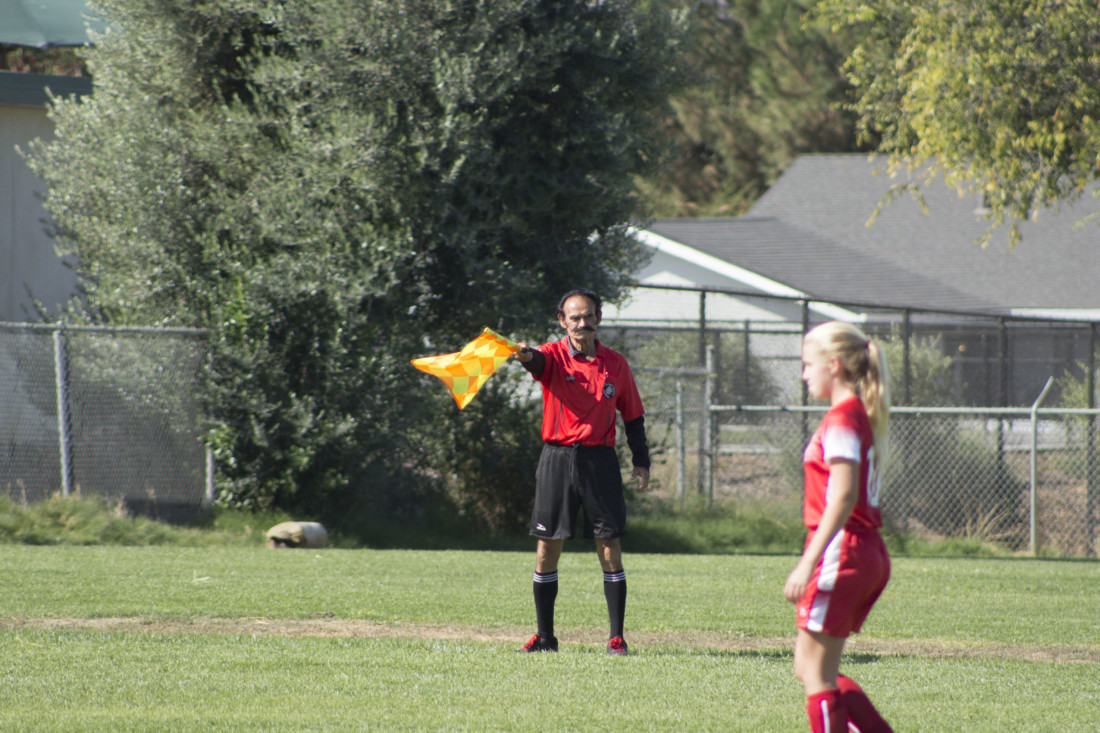 Alvaro Quezada officiating a game as a sideline referee during the Hollister Tremors season. 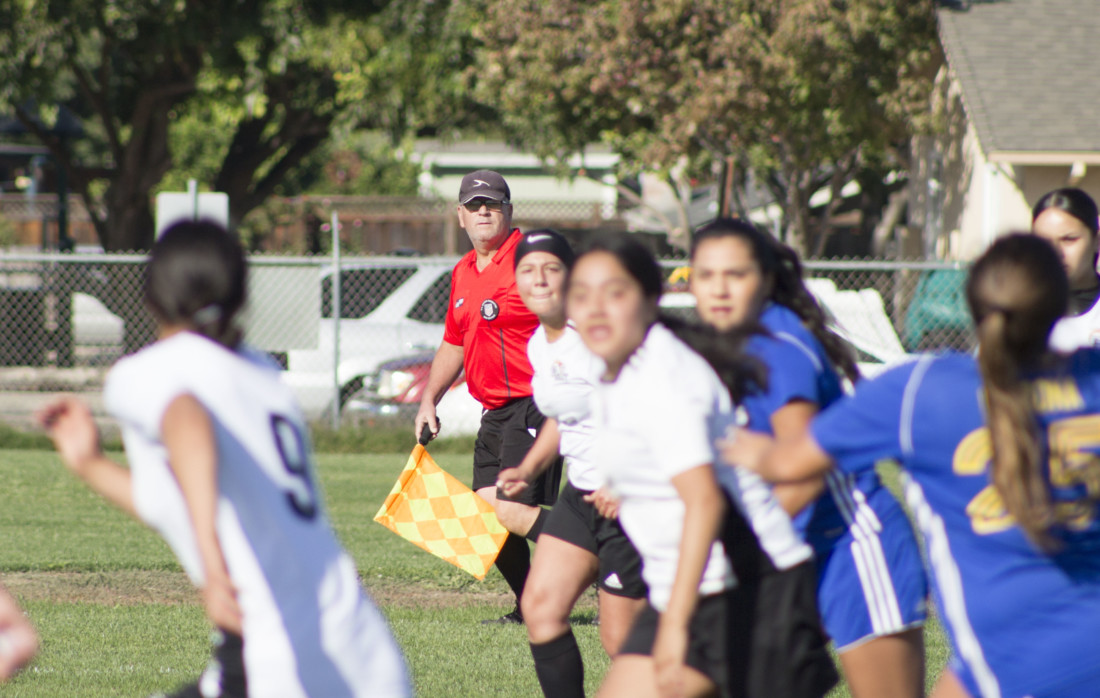 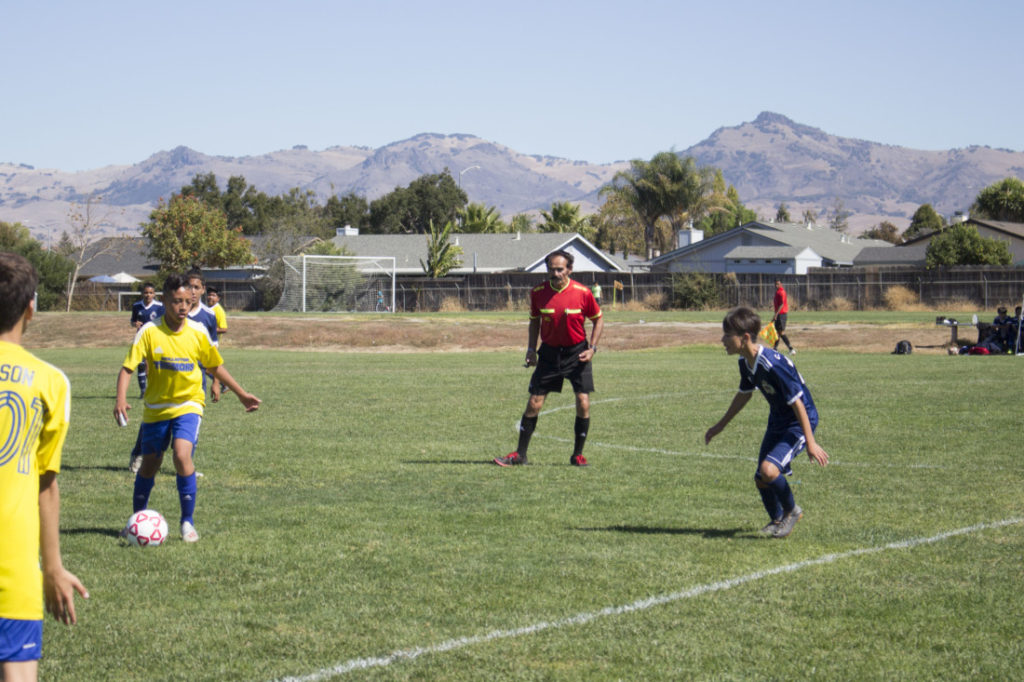 At the sound of the whistle, the soccer ball rolls on the grass inside the white lines marking the boundaries of the field. And while not a minute has gone by, some parents, coaches, and even players already know who they’ll hold responsible for any wrongdoing: the referee.

When visiting teams from youth soccer leagues travel to Hollister, they find a 74-year-old referee who won’t be pushed around. Home teams know better than to try to sway the decisions of Alvaro Quezada.

“Un señor me decía, ‘mira, si tu vez un papa que te está molestando ve llamale la atencion. Dile que te deje hacer tu trabajo por que ese señor, esa person te va ha echar a perder todo,” Quezada said. “Van a empezar a gritarte aqui, alla y alla, donde quiera porque te dejas. Si tu vas y los paras los demás se van a callar.’” (A man told me ‘look, if you see a parent that is bothering you, grab his attention. Tell him to let you do your work because that parent or person will spoil everything. They will start yelling at you here, there and there, everywhere because you allowed it. If you go and stop them, the rest will stay quiet.’)

Quezada has become well-known among the local soccer leagues, youth and adult. He doesn’t shy away from responding to protests or insults in Spanish when they are directed toward any of the three referees officiating the game.

With limited English, Quezada relies on two simple phrases to control the game: “Take it easy!” and “No more!”

Why does Quezada continue to wear the highlighter-colored jersey every weekend knowing he’ll receive criticism no matter his decisions? For the love of the game, he said.

Quezada began to referee in Jalisco, Mexico when he was 22 years old. When he moved to Hollister five years later in 1974, he continued to referee intermittently in tournaments and games while also playing in an adult league. It wasn’t until 1999 that Quezada began to officiate year round for the Hollister Tremors Youth Soccer Club.

Keeping up with five- to 18-year-old soccer players is something Quezada feels he can still do competently. And while outsiders view his job as only calling fouls, Quezada knows it also includes ensuring players’ safety. He needs to be running constantly to stay close to plays to prevent kids from getting hurt. One missed foul can easily escalate into a kicking match.

Referee Jesus De La Cruz, 58, said not many people can do what Quezada does for as long as he has.

“He is very reliable,” De La Cruz said. “He always shows up.”

After almost 20 years of working together, De La Cruz, a former referee coordinator and soccer coach, said he has learned from Quezada how to interpret and understand the rules of the game better. In regards to Quezada’s longevity, De La Cruz said he won’t try to match it.

Quezada also officiates local adult amateur league games in Hollister and Salinas when the youth league is in recess.

While a big part of the job involves being questioned on every call, Quezada prefers to focus on the positive experiences he’s had on the field. One that stands out took place after an amateur league championship game in Guadalajara, Mexico, where he was congratulated for his officiating.

In all sports, emotions can rise quickly at any given moment, all the more so in amateur leagues. Individual outbursts tend to be directed at the person responsible for upholding the rules of the game.

Quezada can recall plenty of games that got out of hand, including ones that ended in fights. He said those horror stories have at times made him question whether to continue refereeing.

“Muchas veces dices ‘Ya me voy a retirar,’ pero como tiene uno el gusanito de estar arbitrando,” Quezada said. (Many times you say ‘I’m going to retire,’ but there is always that need to be refereeing.)

Along with rowdy spectators and coaches, Quezada has overcome health issues, including injuries, asthma, and almost suffering an embolism—the clot of an artery by blood or air bubble—during a game.

As Quezada continued to accrue invitations to referee in other areas, he said his daughters hoped to convince him to retire.

Despite their pleas, Quezada feels he can referee until he’s 75.

“Lo principal es que uno se siga manteniendo físicamente bien porque si uno no se mantiene físicamente bien no tiene caso estar arbitrando parado. A mi no me gusta estar parado en la cancha. Yo les digo [que] el dia que me vean parado sin correr, ese dia me retiro.” (The main thing is for one to be in shape because if you’re not in shape, there is no point refereeing standing still. I don’t like to be at a standstill on the field. I tell them that the day they see me standing still, that day I retire.)