Considered an heirloom fruit on the path to becoming extinct, local farms continue to grow it. 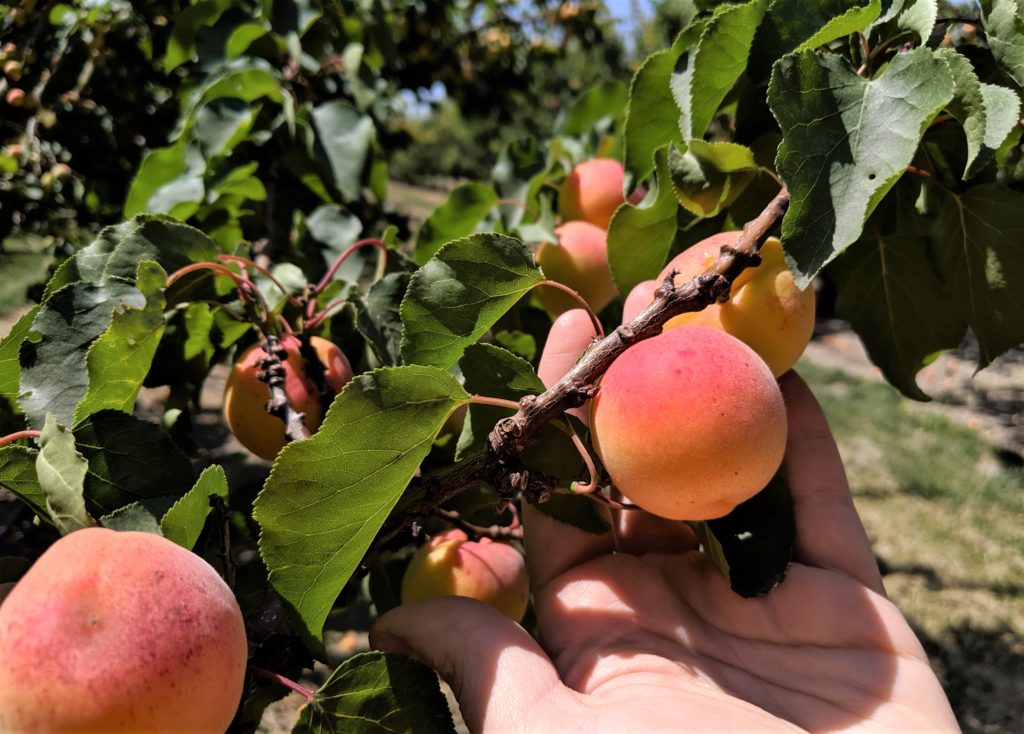 Blenheim apricots can be found on multiple farms in San Benito County. They are sweet and juicy fruit that can be eaten straight from the tree. Photo by Becky Bonner.
×

While orchards of golden orange and rose-colored Blenheim apricots were once prevalent throughout San Benito and Santa Clara counties, today the fruit is a rarity.

In fact, the Blenheim apricot’s decline in production has placed it on the Ark of Taste online catalog’s “distinctive foods facing extinction” list by Slow Food USA.

“By the 1960s both the Blenheim and the Royal—once lords of California’s apricot orchards—began a slow decline, losing out to sales of earlier-maturing and more transportable varieties,” the website says.

In areas where Blenheim orchards once graced the land, developers of tract housing and commercial buildings offered attractive prices to growers willing to sell.

For farmers in San Benito County specifically, two main factors were at work. Turkish dried apricots replaced Blenheim apricots in stores, and the area’s last operating cannery shifted its focus to tomatoes only.

George Rajkovich, owner of Fairhaven Orchards, used to take eight to ten truckloads a day to be canned. When selling his fruit to local canneries was no longer an option, Rajkovich pulled out most of his Blenheim orchards and replaced them with cherries and walnuts.

In the warming months of June and July, Blenheims are still ripening as well as being sold in jams and sauces, and in bagged dried pieces at local farmers markets and fruit stands within the county.

Family and a passion for the fruit itself has kept their production burning.

“It’s your lineage,” said Patty Gonzales of Apricot King Orchards. “It’s a dying art we want to pass on to our kids.”

Gonzales, who works alongside her children and husband Gary, told how her husband’s family came to produce Blenheim apricots in San Benito County.

Though Gary’s father Frank knew little about farming, after returning from World War II his father Joseph bought him an apricot orchard and the land while at a bar in Hollister. Forgoing a bank, Joseph dug up money he had stored in a coffee can in his cellar to pay for the property. After washing $14,000 and hanging it on a line to dry, Joseph purchased the farm.

“Frank didn’t know about farming, but he got 100,000 pounds of apricots in its first year,” Gonzales said. “Frank was able to pay for the cost of the farm in that first year.”

On the B&R Farms website, the Blenheim is described as an heirloom apricot with “a tart skin that is perfectly balanced by a sugary-sweet flesh. Even before you take a bite, the Blenheim apricot draws you in with its aroma and beauty.”

Said Gonzales: “It’s the perfect fruit. It splits easily, its clean, it does not need to be washed.”

Growing them brings its own set of challenges.

With a limited harvest season, sometimes lasting less than two weeks, and a limited shelf life,

San Benito County growers have found ways to maintain their orchards and market their crops within the county and beyond.

In addition to selling at local stands and farmers markets when in season, most Blenheim growers also sell their dried apricots and prepared products at farmers markets outside the county, in grocery and specialty stores, and through their websites.

“You can use the apricots for jams, pie, eating, drying, anything,” Rajkovich said.

For some remote customers, the enticement of fresh Blenheim apricots draws them to San Benito County despite the distance.

“We have one customer that comes every year from Escondido,” Rajkovich said. “She comes about four times throughout the apricot season.”

Asked what sets Blenheims apart, Rajkovich said, “There is no other apricot that compares to the Royal Blenheim apricot. It’s the flavor and juiciness when they are ripe.”

For those looking to pick their own apricots, B&R Farms is hosting a “U-Pick” event on July 13, from 9 a.m. to 3 p.m. Visitors pay by the pound for apricots picked, but the event itself and parking are free.