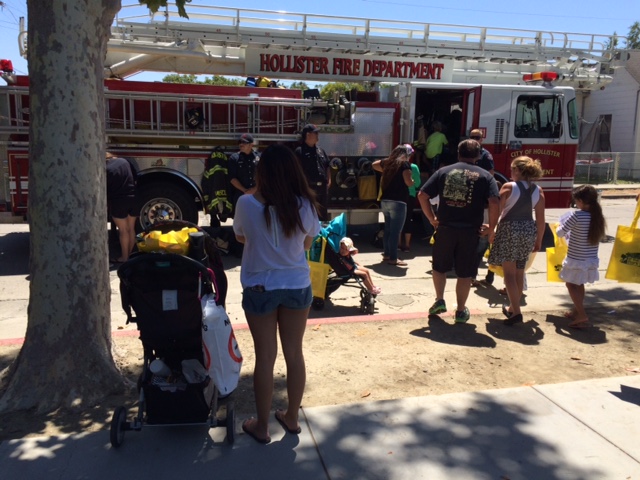 Hundreds of children and adults gathered at Dunne Park in Hollister Wednesday to celebrate Kids At the Park, an annual health and safety festival.
Various local organizations set up booths throughout the park with information about their services available to parents and children. There were also windsocks and beanbag tosses for children to play with while Hollister's Joe Fata, who recently had a stint on the television show "La Voz Kids," sang songs in Spanish on stage.
The Hollister Fire Department sported a shiny, red fire truck on West Street that children could explore.
"We give them a look at the engine," said Captain Mark Aguirre. "We give them an idea of what they want to do in the future, job wise."
Carly Galarneau handed out information about suicide prevention services at her table. Her services cover Monterey, San Benito and Santa Cruz counties.
"We help them through prevention and education in local schools," Galarneau said. "We run a 24-hour line. Young people and adults can call in who are having a tough time. Sometimes it's just about knowing where to turn."
At the San Benito County Tobacco Education booth, health educator Martha Lara offered various visuals to educate kids about the long-term effects of smoking on the body. One such visual was a plastic face, darkened on one side with bubbles. Lara said that is what the lungs look like after smoking and how if it showed on the face, it would be much more visual.
"What I do is educate them about the consequences of smoking," Lara said. "We do various activities such as Kids in the Park. We want to educate community members about tobacco related diseases."
Just down from the park, Hollister resident Priscilla Martinez helped buckle her daughter into a stroller to prepare her to enter the park. Martinez planned to take her three children to the festival.
"We're going to it to enjoy summer with the kids," Martinez said. "We love coming every year."