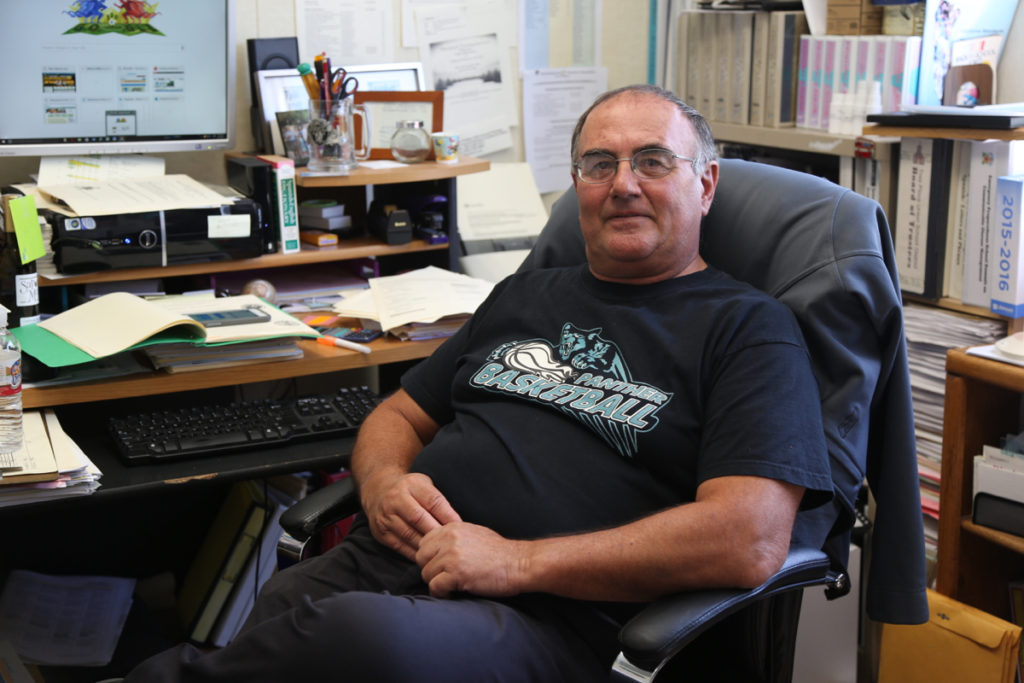 Sarah McFall, vice-president of E Cubed Foundation, said, “Both Lu and Janeane have shown a sustained commitment to a broader education for students — one that includes art, music and hands-on science.”  She added that E Cubed appreciated their service to education and enrichment in particular.

Medeiros was raised in San Benito County, attended San Benito High School and graduated from Humboldt State University. He then went on to earn his master’s degree and administrative credential from the University of San Francisco.

He started teaching in 1979 at Rancho San Justo School as a long-term substitute, then became a bilingual teacher full-time. Afterwards, he taught at R.O. Hardin as a fifth-grade teacher. He moved to Calaveras School in the late 1990s and became a resource teacher and then a vice principal.

Medeiros was hired by Tres Pinos School in 1998. Here, he made many changes, among them were improved infrastructure, upgraded technology and after-school sports programs. He held his principal position for 18 years and taught math to the upper grade students along the way.

During his years as principal, Medeiros adopted art as part of the school’s regular curriculum, which is a shared goal for E Cubed Foundation. For many years, Tres Pinos students have enjoyed music programs and an annual science-based trip to Yosemite National Park. Medeiros demonstrated his support for a well-rounded education and took steps to see that his students had enrichment opportunities. Luciano Medeiros retired from Tres Pinos School this June, at the end of the 2015-16 school year.

Janeane Williams was also raised in San Benito County. She went to San Benito High and attended Hartnell College. She has two daughters, Hillary and Jillian, who attended kindergarten through eighth grade at Willow Grove School in Paicines. She and her husband, Doug Williams, just celebrated their 35th wedding anniversary. Williams family members have also shown their commitment to a high-quality rural education as teachers and board members.

Williams said in a recent email, “My father in law, Tommy Williams, served many years on the Willow Grove school board.” Doug and his three older brothers all attended the school. “My mother in law, Ann Williams (still alive at 91 and living on a ranch in Paicines) she taught at Bitterwater, Jefferson & Cienega schools, for many, many years."

On her part, Janeane Willaims joined the Willow Grove school board the year before her daughter, Jillian, started kindergarten. When the girls graduated and moved on to San Benito High School, Williams remained on the board. Williams is sister of San Benito County Superintendent of Schools, Krystal Lomanto.

Williams explained that it wasn’t just about her children, but that all students should be able to get the most out of their rural school experience.

“I thought working with E Cubed could be a great opportunity and that our students should benefit from it, too,” she said at the awards dinner. E Cubed Foundation was another funding source to provide more consistent art and music to the students. “I appreciate all of the hard work and countless hours the board put into making E Cubed possible.” Williams also mentioned early board members Dara Tobias, Marie Hoffman and Susan Modic for their enthusiasm and contributions.

Williams continued, “It was very important to me and a priority to make sure Willow Grove students were given the opportunity to share in the arts and sciences." Through her efforts, Williams helped develop a long-term and cooperative relationship between Willow Grove school and E Cubed.

Art, music, singing and drama funding have been consistently available to Willow Grove and other rural school students through annual E Cubed grants. Williams left the Willow Grove School board after 18 years of service and now spends time as a volunteer for the San Benito County Fair.

McFall, said, “Because of Janeane’s strong support and determination, students have enjoyed music, designed sets and acted in plays.”  McFall explained that students do best being introduced to these skills at a young age.

“As they move on to other pursuits, both Medeiros and Williams have left behind a broader education for future rural students,” McFall said, thanking them for letting elementary through middle school-aged students discover the joy of art, music and scientific exploration.

“E Cubed Foundation appreciates the dedication of these two individuals and thanks them for their service to Tres Pinos and Willow Grove Schools," she said. ”E Cubed Foundation will continue to offer grants for fine arts and hands-on science classes to the rural schools, but having faculty and board members like these two makes communication and academic enrichment that much easier because we are working together on the common goal of a well-rounded student.”

E Cubed Foundation was started in 2002 and became a 501(c)3 the following year. It offers grants to the rural school for art, music and hands-on science. BenitoLink executive director, Leslie David, is a founding member of E Cubed Foundation and is still actively involved in the nonprofit.