Oak Titmice offer insights and entertainment as they raise their brood 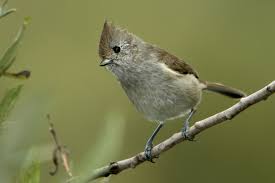 A small drama is playing itself out a few feet from me as I write this. On the other side of the window, a pair of Oak Titmice is busy raising a family.

Actually, the drama is only small in one sense. The titmice are scarcely five inches from bill to the tip of their tails, and each one weighs only about 20 grams – far less than an ounce.

But the drama is enormous in the sense that these little birds are contributing essentially to the next generation of their kind. I think it is fair to say that the most important job for an individual in any species is to pass along one’s DNA to the next generation, and therefore to help ensure the very survival of that species.

The two young members of the family have learned to fly – sort of, but like adolescents of any species, they seem to be constantly starving and unable or unwilling to go about feeding themselves. Even adult titmice display weak, fluttering flight.

Perhaps that’s why they are not migratory. Instead, they inhabit and defend a small home patch throughout their lives. They’re such dependable homebodies that they also form lifelong pairs.

“Our” titmice certainly are nesting nearby, and I have a pretty good idea where. They depend on small cavities in trees, or on nest boxes.

They’re in our garden because we have a steady supply of sunflower seed available. Cautious and shy by nature (smart strategy if you’re the smallest one at the snack bar) they fly to a feeder, grab one or two seeds and quickly depart. The parents and young perch through most of the day in a large viburnum just outside our kitchen window.

Other visitors to the feeder are far less cautious. The Brown Towhees, perhaps not the brightest feathered creatures, tend to prefer to either take spilled seeds from the ground or to mug the titmice for their food. The House Finches hang around the feeder, gorging themselves like a pack of fraternity boys at a pizza parlor.

It’s easy to tell when the family of titmice is visiting. The young call incessantly. The call is a little like what a chickadee with a head cold would sound like – very distinctive. Just yesterday, the two fledgling birds finally began to figure out how to remove seed from the feeder and open it themselves. The birds cannot just crack a seed open the way we do. Instead, they hold it against a branch with one foot and hammer each open with their bills.

This little family is a great reminder to us of the value of appreciating the commonplace. The birds are drab – kind of mousy grayish-brown, with large, dark eyes. Perhaps their most distinctive feature is a little crest, like a cardinal’s.

The pleasure is in coming to know them better, and to watch them interact with one another and with other birds.

Oak Titmice were lumped together with what is now regarded as another species – the Juniper Titmouse – until the mid-1990s. Back then, both were properly referred to as the Plain Titmouse.

But they got their own names in 1996 because they inhabit separate ranges, have different calls and even slightly different colors. (The Juniper Titmouse is a little more gray than brown.)

The birds are not rare, but their presence in our garden every day is a chance to root for the little guy. So far, they’re holding their own just fine.