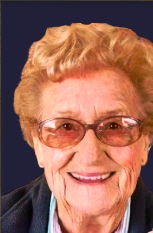 Anita Aurore Bonvie 95, passed away at approximately 4 A.M on April 15. Born and raised in the state of Maine Anita told many stories of her life at the home dairy. Moving to California with her Husband and children was one of the best things she said she could have done. She had her fill off digging her way out of the snow back East and enjoyed California Sunshine! She had a passion for seafood and could cook you a feast of prawns, crab, lobster or fresh fish! She was a devoted Wife and Mother and took pride in caring for her family. Hollister California became her home many years ago and, she lived life to the fullest. A devout Catholic she raised her children the same. Trust in the Lord Jesus for one day you will walk alongside him. She is the daughter of Bill and Ann Boucher.

On Friday,  April 26th, family and friends will meet at Immaculate Conception Curch in Tres Pinos at 11:00 a.m. for a Mass of the Resurrection. Interment will follow at Calvary Cemetery.