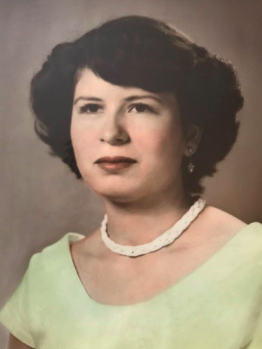 From an early age, Betty was a fan of many sports, playing basketball in her youth and cheering avidly for her teams throughout her life.  Betty attained a nursing degree from San Jose State College and worked as a private nurse in Monterey and Carmel, CA since 1976.  Betty also volunteered with the Flying Doctors of San Jose, CA by being an interpreter for them in Mexico.  Also active in politics, Betty was a chairwoman with the American GI Forum in San Jose, CA.

Betty married Robert M. Baca on July 28, 1951 and had four children.  She will be remembered by her daughters Cynthia Mendez-Gonzalez of Hollister, CA, Debbie Morikawa of Marina, CA, Monica McEldowney of Monterey, CA, and Helene Crees of Portland, OR as well as her eight grandchildren, and six great-grandchildren.  Betty is preceded by her husband, parents, sister Genevieve Morales, brother Adolfo “Junior” Macias, and grandchild Manuel J. Mendez.

A service will be held at Carmel Mission Chapel, in remembrance and honor of Betty. Date will be announced.