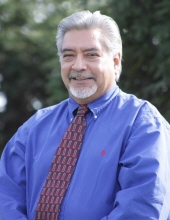 Carlos Rodriguez passed into eternal rest on January 13, 2021 at Hazel Hawkins Hospital after a courageous battle against COVID.

Carlos Manuel Garcia Rodriguez was born on November 5, 1955 in Nuevo Casa Grandes, Chihuahua, Mexico to Benito Garcia and Dolores Romero Garcia. When he was a young child he traveled to the United States with his mother where they settled in the town of Paicines, California. He would often recount fond memories of his childhood growing up in a landscape filled with orchards, lots of area to roam, and the freedom to explore.

Carlos attended Willow Grove Elementary School from kindergarten through eighth grade. In 1973 he graduated from San Benito High School, then known as Hollister High School. He earned a Bachelor’s Degree in Management from St. Mary’s College and a Master’s Degree in Counseling Psychology from the University of San Francisco. He was licensed by the Board of Behavioral Sciences as a Marriage and Family Therapist. His professional tenure always included opportunities to serve his community whether as a Vocational Consultant, Clinical Director or as a skilled therapist in private practice meeting the mental health needs of families, couples and individuals in their quest to improve their lives. In 1993

Carlos married Nancy, his wife of twenty-seven years. They established a home in Hollister where they raised their son Julio and daughter Hannah. His family was the light of his life. He enjoyed family trips to Cancun, Disneyland, Yosemite and returning to Mexico to visit family there. A favorite past time was spent with his family hunting for sea glass on the beaches of Monterey and enjoying a glass of Blue Label and a good cigar on a Summer evening. His pride for his family was evident in his support of all their endeavors including his son’s campaign for city council and his daughter’s certification as a phlebotomist.

In his youth he managed and participated in recreational softball teams, enjoying both the competition and camaraderie that was always a part of the game. The team moniker “The Loading Stones” was in homage to both the Rolling Stones and Carlos’s acquired nickname “Load.” (The true origin of his nickname is shrouded in mystery.) While Carlos had eclectic tastes in music, he was a self-proclaimed Classic Rock loyalist, citing Rush, and Foghat among his favorites. He spent many weekends attending concerts at venues around the bay area. He also traveled around the bay area with the local band Savannah for seven years. He often referred to this period as some of the best times in his life. Carlos was a sports enthusiast and loyal fan of the Rams football team since childhood, no matter where their home was at the time. He was a season ticket holder of the Golden State Warriors and loved to share his seats with family and friends alike so they could enjoy the courtside experience. He was also a long time San Francisco Giants fan supporting the Bay Area team though all its wins and losses. Carlos placed a high value on his friendships and was proud to treasure a close circle of friends, most of whom he met in high school and maintained close contact with for over 40 years. He is best described as humble, loyal and always fun to be around. He was a person with a quick wit and dry sense of humor who had a love of good food, good cigars and who cherished his family and friends.

Carlos is survived by his wife Nancy, son Julio, daughter Hannah, his mother Dolores, brother Rene, sisters Elodia and Veronica of Hollister, brother Raul of Las Vegas; stepmother Berta, sisters Berta and Irma, brothers Jose Luis, Carlos and Francisco of Chihuahua, Mexico and numerous nieces and nephews, aunts and uncles and in-laws. He was preceded in death by his father Benito and stepfather Pablo.