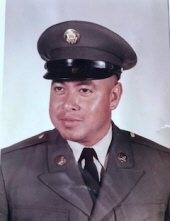 Cecilio Andrade Cortez died at the age of 81 on December 20, 2020. He was known as Chilo or Cecil to family and friends. Born in Chihuahua, Mexico, Cecil came to the United States at the age of 3 to Navajo, New Mexico. From there, he and his immediate family came to San Jose, California in 1946. He resumed his childhood upbringing and adult years, graduating from James Lick High School in 1958.

Cecil was drafted into the U.S. Army in 1966 and deployed to South Korea. While serving in Korea, he met his wife Cha of almost 53 years. Upon his return to San Jose with Cha in 1968, they started their family in San Jose. In 1971 Cecil and Cha discovered Hollister, California and eventually built their home on their property in Santa Ana Valley.
Cecil relished the open, country space and happily remained there for the rest of his life.

Cecil is a member of Operating Engineers Local Union 3. Cecil was a grade checker for 40 years for numerous construction companies. Cecil retired in 1997. He enjoyed having friends over to “shoot the breeze” over cold beers, listening to jazz/music, and discussing anything and everything about life. His interests were in astronomy, electronics, sports, the sciences and politics. Cecil was a fan of animation and enjoyed watching cartoons. Cecil appreciated everything about nature.

Cecil is survived by his loving and devoted wife, Cha, daughter Olivia, son Joseph, daughter-in-law Jessica Starkweather Cortez, granddaughter Mikaela, and grandson Luca. He is also survived by his brothers, Dennis (Kyoko) and Tony (Sandy) Cortez along with numerous nieces and nephews. Cecil was preceded in death by his daughter Susan, sisters Lina Olivo and Rosalie Arena, brothers Guillermo, Peter, Frank, and parents Juan and Francesca Cortez. May you rest in peace, Pops.

The Mass will be on Tuesday, December 29, 2020 at St. Benedict Catholic Church with interment following at Calvary Cemetery.