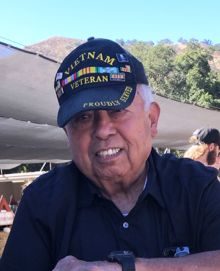 On Wednesday, February 3, 2021, Daniel Pagaran Sr., loving father of three children, passed away at the age of 81 in Hollister California.

Born in Guadalupe California on January 13, 1946. He was the second child of Arcadio and Felisa Pagaran. He graduated from San Benito High School, and a long time proud native of San Juan Bautista California.

In his early days, Daniel Pagaran’s Sr. hobbies were: playing piano l, tuba, bass, fishing, softball pitcher, and welding. He was a long time fan of the forty niners, San Francisco Giants, boxing, Casinos; and he loved to play poker with his Veteran friends. Lastly, his personality was genuine, he had a dry sense of humor with a distinctive laugh, and loved making jokes.

Furthermore, he loved collecting collectable items, family photos, and his 65 Chevy truck. He enjoyed oldies music, he loved his cats and enjoyed eating seafood when he could; and most especially, he loved reminiscing about the past, and talked about his experiences during the Vietnam War.

He will be finally reunited with his loving son; Danny Boy Pagaran Jr., and the mother of his children, Maria Pacantara; Parents Arcadio, and Felisa Pagaran; Brothers Arcadio II, and Raymond Pagaran Sr; his cousin Vicente “Bobo” and Auntie Lolita Pinuela.

Daniel Pagaran Sr. was a hard working man until he retired in 2006 from the Chemical Lime Natividad Plant in Salinas. He was an operator/machinist/laborer.

Daniel Pagaran Sr. was Veteran of the Vietnam War. He was a naval seaman in the Vietnam from 1964 to 1965; aboard the radar escort ship USS Vance DE387. Part of the naval surveillance, he helped the 1st Marine Calvary destroy a Viet Cong machine gun bunker, which was filled with high explosives.

In addition, he was awarded the Vietnam medal 2 combat stars medal, and a national defense medal. He was also a proud lifetime member of the VFW (Veteran of Foreign Wars) of San Juan Bautista, California.