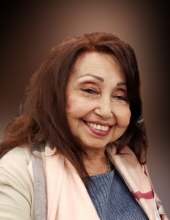 Eva Corona passed away on March 12, 2020, at 76 years of age. She was born in Palos Blancos, Guerrero, Mexico on March 20, 1943, to her, then deceased, father Evaristo Mejia and Esperanza Arciniega Corona. She grew up and attended school in Acapulco, Guerrero, Mexico before coming to the United States and making Hollister her permanent home in 1961.

Eva was a devoted Jehovah’s Witness and was baptized as one on December 13, 1958, in Mexico City. Her greatest joy was speaking about Jehovah and her faith to others. She retired from Gilroy Foods in 2015 where she worked for 24 years as a weighmaster. It was upon retirement that she decided to dedicate herself full time in her ministry.
Eva will be remembered as a master in the kitchen and her ample collection of pots and pans show it. She loved to cook for her family and many friends enjoyed her cooking as well. She often hosted family dinners serving some of her most loved dishes like entomatadas and chalupas. Throughout her life she enjoyed sewing and often made clothes for her 5 children which included anything from suits for her sons to dresses for her daughters. She loved music and there wasn’t a gathering where you wouldn’t find her out on the dance floor dancing to some of her favorite cumbias, salsa, and merengue songs. She was always available to lend a helping hand with whatever she could when anyone was in need.

Arrangements have been made for private cremation and inurnment through Black Cooper Sander Funeral Home. Services will be held at the Kingdom Hall of Jehovah’s Witnesses at a later date to be determined.