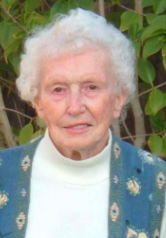 Florence Glenny Farney (Glenny) left us peacefully on May 22, surrounded by her loving family. Glenny was born in San Francisco in 1918 and was raised in London, England. When WWII broke out she returned to San Francisco to escape the bombings in England. This is where she met her future husband Thomas Noble Farney, and was married in 1944.

Glenny lived in several towns in California and eventually settled in San Juan Bautista. She worked as a bookkeeper for different farmers and merchants, and helped out at San Juan Union Elementary School in the earlier years. She belonged to The Native Daughters of the Golden West for more than 50 years, and was a member of the Library Auxiliary

In addition to being an avid bridge player, she enjoyed listening to classical music, playing the piano, gardening, genealogy and needlepoint.

Glenny was a very loving, service-oriented person who adored her grandchildren. She was proud to be the first member of her family to reach 100 years old.

We would like to thank the staff at Mabie’s Care-home (South) for the compassionate care they provided for Glenny over the past six years.

There will be a private family graveside service.

A reception celebrating Glenny’s life at the Native Daughters of the Gold West adobe at 203 4th street in San Juan Bautista, on May 30.

In lieu of flowers, the family requests a donation to the Native Daughters of the Golden West in care of Grunnagle’s Funeral Home.