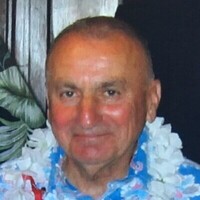 His name was Francis Michael Bishop Jr., but if you called him that, you didn’t know him. If you knew him, you called him Jr, and you liked him, because everyone liked him, and I’m not just saying that because he’s no longer with us, having passed at the age of 89 on a crisp and bright morning in November in Hollister, CA, nor am I saying that because my blood was his blood, but because his likability was an undeniable fact — he exuded kindness, fairness, tolerance, honesty, an almost sickening number of virtues, all of which I’m sure he’s being rewarded for in the great beyond.

He was born in Chicago of Greek immigrant stock, traveled West in 1946 with his parents and three brothers to the infinitely less dismal climate of California and, after a stint in the Air Force, worked as a mechanic for Francis Sr. in the Dodge dealership which bore his familial name. Jr became a partner and his service department was recognized year over year as a Chrysler 5 Star Service center.

A firecracker of a woman by the name of Sue waitressed at the cafe attached to said dealership; he chased her until she caught him, and shortly thereafter they birthed three children, Debbie (Rodney), Linda (Scott) and Mark (Michele), who subsequently birthed eight grandchildren, Megan, Landon, Raymond, Monique, Katie, Dylan, Ian, and Cole, all of whom survive him with the exception of one, Katie, whom he no longer has to mourn, whom he is finally reunited with.

He was active and admired in the Masons and the Eastern Star, where he’d share his poignant and humorous musings in speeches written on yellow legal pads with fingertips permanently stained black from the hulls of the walnuts he’d habitually crack while facing the orchard in which he grew them, the same orchard where he’d spend hours dragging hoses from tree to tree, burning enormous orchard pyres, and then generously share perfectly halved walnuts with everyone.

He read voraciously, laughed readily, and loved wholly. To attempt to distill the impact his 89 years of life had on this planet into a handful of paragraphs would be a fool’s errand. All I can say is this — if you knew him, you will miss him, and if you didn’t, I am sorry for your loss.

Celebration of Life is scheduled for January 28 at the Masonic Lodge in Hollister at 2 p.m.  Lunch to follow at Paine’s Club on East Street.  RSVP’s are required for lunch.  Sue at 831-637-3554.