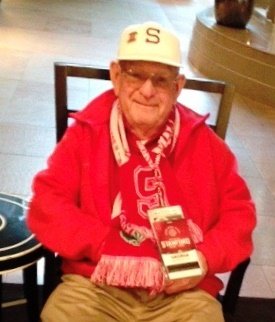 George Howard “Andy” Anderson was rightfully celebrated for his laugh. He was often identified by it too. “I haven’t seen Andy yet,” friends would say, “but I know he’s here because I heard his laugh.” Like the man himself, his laugh was warm, generous, and loudly memorable. His son Bruce’s Baler baseball teammates would go into the stands before games, armed with their best jokes, hoping to get Andy to laugh. His daughter Kelli’s Stanford bandmates devised a cheer based on his laugh.

On April 26, Andy’s laugh was silenced when he passed away at Hazel Hawkins Hospital in Hollister.

But not before Andy, a community servant, history buff, and sports fan extraordinaire had had 91 years of travel, adventure, and good laughs.

Andy was born into a pear-growing family in San Jose and lived there until World War II when his family moved to San Juan Bautista because of wartime gas rationing. He graduated from Hollister High in 1946 and enrolled at Stanford, where he wrote sports for the Daily, served as student manager of the baseball team, trod the boards in the school’s drama productions, and reluctantly graduated with an industrial engineering degree in 1951. A spot in the U.S. Navy and the Korean War awaited. He shipped out as a lieutenant junior grade and headed to Asia as the war was nearing its end, a journey that sparked his life-long enthusiasm for travel. While in the Navy, he married Dawn Page, a San Jose State student from Coalinga.

After the service, Andy returned to Hollister with Dawn and joined McCormick-Selph. A couple of years later, Andy co-founded Holex, a manufacturing company that produced explosive devices. Holex became one of the county’s leading employers and supplied parts for many of the early U.S. space flights. Characteristically, Andy organized and managed the company’s softball and bowling teams. Later, Andy served as the sales manager for George Bassi Distributing in Watsonville.

Andy’s other work was his tireless volunteering in the community. After a stint on the county board of education, Andy was elected to serve on the Hollister High board of trustees, a role he filled for 20 years. He and fellow trustee Pete Jones did some of the foundational work that led to the high schools in Hollister, Gilroy, and Morgan Hill agreeing to be the feeders for what became Gavilan Junior College.

Early in his board tenure, Andy began advocating for girls’ interscholastic sports, a quixotic vision in the 1960s but one that was fully realized by the time he left the board in the 1980s. He was also instrumental in getting the high school’s state-of-the-art swimming and diving pool built in the mid-1970s.

As a new trustee in the early 1960s, Andy was asked to serve as the public address announcer for Hollister High football games at the newly opened Andy Hardin Field. For the next 20-plus years, he was the definitive Voice of the Balers, his signature baritone booming out across the fields and neighborhoods of Hollister so that many residents could follow the Balers without actually going to the games. He took his PA job seriously, striving to identify players correctly and pronounce their names properly. He did fall short on occasion, pronouncing the middle part of upcoming Baler opponent Robert Louis Stevenson as lew-ee rather than lew-is. When this was pointed out, he laughed: “Well, Louis Picetti is the only person I know with that name, and that’s how he says it.”

At various times, Andy was also active in Rotary, Elks, the Veterans of Foreign Wars, and E Clampus Vitus. He spent time as a Boy Scout leader and a Little League coach. He was the chair of the county’s Republican Central Committee. Andy was particularly devoted to Community Pantry, financially and physically supporting the group’s mission to help feed local people. Into his 80s, Andy and his lifelong friend Herb McAbee would drive a flatbed truck to Salinas every week, forklift pallets of food onto the back, return to Hollister, and unload their delivery.

In his mid-40s, Andy took up running. He ran in hundreds of 5K and 10K races across California and knew the festivals and points of pride in dozens of towns most natives of the Golden State have never heard of. He often finished his runs after the ambulance that trolled the end of the race for runners needing help.

Andy was all about finishing — as anyone who had sat with him through rainy football games, overtime basketball games, or extra-inning baseball games could attest. He completed 16 marathons as well. He lamented that he had run a race in every California county except Sierra, where they didn’t hold any. As an 80th birthday present, his family put on The Missing Link 5K there.

Running was just a tiny window into Andy’s love of sports. In the early 1960s, he was the general manager of the Hollister Merchants semipro baseball team. He did everything for the team from mowing the field and chalking the batter’s boxes and basepaths to stocking the snack bar and tapping the beer keg.

As a former college sportswriter, Andy seized the opportunity to become a charter subscriber to Henry Luce’s harebrained idea for a weekly sports magazine back in 1954. He was still receiving Sports Illustrated when he passed away. He was unbearably loyal, and he did like to finish things.

Andy is survived by his wife, Dawn; his children Sheri (and Jim), Bruce (and Susan), Doug, and Kelli (and Jim); and his granddaughters, Claire and Luci.

The family suggests that anyone who wants to honor Andy’s memory support Community Pantry, particularly right now. And the next time something tickles your fancy or strikes you as funny, throw your head back and have a good belly laugh.