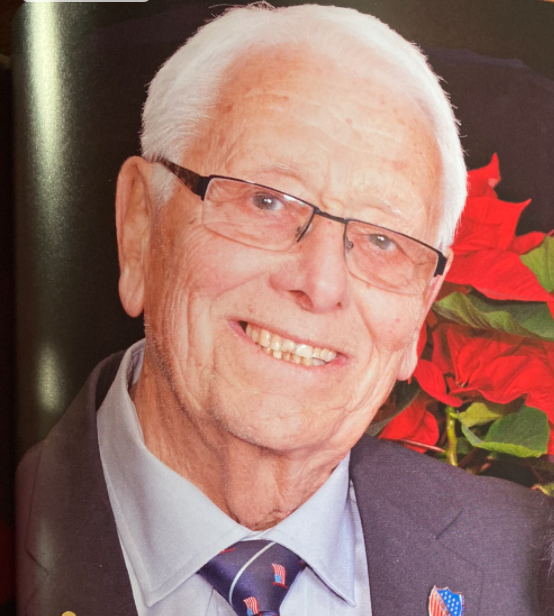 George went as peacefully as he had lived his life: uncompromising, undemanding…unapologetic, independent, never asked a favor nor expected one- quietly slipping into the night while others slept. So typical of George. Why are we surprised? George left the best way any of us can hope to go from this world, in his sleep. He has left behind many who would miss him and reflect on his life with us, in many different ways.

George came to USA in 1983 transferred from an American Oil Company in Libya called Petrolite as Director of North African Operations.

George was multi-talented with engineering degrees in Metallurgy and Petroleum Chemistry, Electrical and Civil Engineering. He was a Licensed Contractor, Real Estate Broker, American Board-Certified Optician and National Contact Lens Specialist. His passion for learning new trades was only second to his passion for music. In his seventies he learned to play the saxophone from Les Pierce at Mr O’s Music Academy. His hobby was buying and rebuilding rundown properties, collecting antique clocks and British coins. Recently he had even attempted to trade options as a hobby. His first loss of $500 cured him forever- he was not a gambler at heart.

George evolved over the years from a young ambitious man who thought life was a contest and he had to win it all. As he grew older, he mellowed in his ways, as he did not need to struggle any further, for he had already achieved beyond his dreams.

He never forgot the struggle of his younger years, nor the difficult life his parents endured, during the World Wars. As a result of these memories, he routinely compared the new “depraved” generation with his own deprived youth. In a way, he spent more time living in the past than in the present or the future.

George was one of the three children born to George Leonard Ball and Edna Emily Ball in London, England. His sister Margaret Wolfenden lives in Dunedin, New Zealand and unfortunately, his brother Martin Ball, is deceased. George was married to his childhood sweetheart Shiela Kaye Richards, for over two decades and later, continued to be friends.

He married Parveen Sharma in 1985. He is survived by sons Craig and Adrian Ball (living in Kent, U.K.), a daughter Sarah Jane Ball (married to Steve Jeffs ) living in Melbourne Australia; Sonia Banks (married to Derek Banks) living in Monterey; and, Rohit Sharma, his son, friend and confidant, who is living in Hollister, California.

Amongst the loved ones, George is also survived by Donald, an African Grey ( 16 yrs.), Freddie, a Yellow & Gold Macaw (20 yrs.), the two Sulcata Tortoises Moses Sr. (35yrs.), Moses Jr. (5 yrs.) and last, but not the least, a goat called Donkey and a few nameless chicken and love birds.

George donated regularly to numerous charities. The most notable amongst them are: The Disabled Veterans of America, American Heart Association, St Jude’s Hospital, the Lakota American Indian Village, the Boys Town, PBS, the Oxford Club, San Francisco Zoo, the Monterey Bay Aquarium and BenitoLink. He was a longtime member of the San Benito County LULAC Council 2890 and Los Banos Lions Club. His political ideology was a matter of controversy among close friends and family!

While traveling and living in Iran, Middle East and North African countries, his closeness to the Islamic religion influenced him in converting to Islam. He was a devout man in his own way. After a terrible car crash on a family trip to Yosemite in 1986, George swore never to drink again- and never did.

He enjoyed long chats with his daughter, Sarah from Australia, who remembers him as a loving dad with simple tastes in life, a Dad who enjoyed a cup of tea, told funny stories, and loved to watch ‘The Family Guy’. Sara lovingly said, “My Dad always had a story to tell leaving me in fits of laughter. His stories started when we were little with the ‘Tales of the Wish Wheel Plonk Wagon.’ I always thought he should have written a children’s book about the adventures he used to tell us. He was fun to hang-out with & made me feel very special. I have so many happy memories of our time spent together. We would always laugh. His view of even mundane things was uniquely funny.”

His grandson Charlie sent this note from Australia along with a picture of the two of them sleeping on a bench, while waiting for Parveen to finish shopping.

“Grandad, you were always one of the funniest people I have ever met, no matter what the situation was, you could always make it sound funny. I remember when we were waiting, at Southland Shopping Center in Melbourne, for Parveen to finish shopping – you fell asleep on the chair, and when I woke you up, Parveen had gone into another shop. and you told me that I should have never woken you up till Parveen ran out of money. I do remember always laughing with you until I was crying. I enjoyed the time we spent together going to Mexico, French Caledonia, The Great Barrier Reef, Sydney and New Zealand, playing Charades on the Ship and I wish we got to spend more time with each other. I loved the fact that you framed the sketches I sent you and put them in your office, and I enjoyed the times when we watched Family Guy together, because I knew it was your favorite show. You were always very supportive of me and my brothers, sports and art, and I shall always remember you calling me ‘Stewie with an oval head.’

This is goodbye from your Stewie”

According to George, there were people in his life who could do no wrong : his wife, his daughter, and his grandson Devin. His devotion to those he loved was totally blind and unconditional.

He was critical of the world streaming past him and leaving him behind in technology (especially, the internet). He never understood the concept of the ‘World Wide Web’ and of email addresses. He shunned the internet by deciding not to embrace it until it became a necessity much later in life. He used a computer with 80 Megabytes of memory till it became incompatible with his financial software. This was not because he was miserly, for he would be most generous to others, by buying expensive laptops and gadgets as gifts, but as a result of the fact that he never learned to spend money on himself.

He could always do without the luxuries around him. If he had one more than three shirts, he would give one away since it was one too many. He walked around town with no regard to his appearance – mostly in work clothes with paint on his sleeves. However, he always kept a suit, a crisp white shirt and a tie in his car, in preparation of having to get dressed at short notice, to attend a function. George always dressed with a tie, even when repairing a broken pipe or a fence.

As he grew older, especially in the last few years, he began to look around him with a different perspective. George learned to walk rather than run, became tolerant of others’ shortcomings, accepted help without prejudice, and tried somewhat to filter his views of the world around him when conversing with those of different ideology.

The last few months of his life he had become physically weak and somewhat forgetful of yesterday. He had difficulty performing jobs he had taken for granted- climbing on to the roof of the house to fix the tiles, lifting a heavy gas cylinder and, walking long distances. These daily activities became a chore. One could see the palpable pain in his eyes as he would struggle with jobs that were second nature to him. He hated his own weakness, yet he insisted on doing everything himself. A week before he left, he finished fencing the entire perimeter of the fields around the house, so that the goats could have the run of the grounds while the grass was still green. He wouldn’t hire help since he did not wish to give the appearance of being weak or incapable. He loaded a truck full of firewood for a neighbor that final Sunday.

We will all miss him. The letters we have received from people we thought he hardly knew, have a common theme in each one of them: “George will be missed for his generosity and willingness to help any time, in any way”.

For a man, who admitted openly that he had no friends, it is surprising to see so many around the world, sincerely mourn his departure from this world. On Veterans Day George would always unashamedly cry as he remembered his friend, Calvin Bremmer, who served as a US Marine.

You, our friends and I, and the children and grandchildren, will miss him. We will all regret not having said something to him; we will look back at missed opportunities: for reconciliation, expression of regret, show of approval or even smile at something he may have said long ago – or recall an almost forgotten memory. Naturally, some of it will hurt and a few incidents will make us laugh or smile, pensively.

George rests in the Garden of Noor, at the Chapel of Chimes Cemetery, in Hayward, California. He rests a few feet from his mother-in-law’s grave. He used to say that he planned it so that “he could keep an eye on her!”