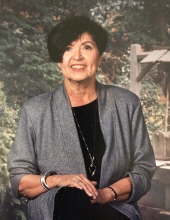 “Blessed are the people whose God is the Lord.” Psalm 144:15
Geri was born on the family farm in Artas, South Dakota on October 29, 1936 to Albert and Bertha Zimmerman. She grew up there doing the usual farm chores with rock picking in the fields the least favorite. Geri started her education in Artas
Elementary, Eureka High School and Northern State College in Aberdeen, South Dakota.

After graduation, she began teaching in the elementary school in Artas, Webster, South Dakota and in Iowa. She and a friend thought it would be exciting to go to California and teach school there. They both found jobs in Salinas.. Geri taught the 5th grade in Morgan Hill for many years before her retirement.

Geri met her husband in the hair salon he and his twin brother owned in Salinas. They married in 1963 and had one son, Peter Jason. Geri loved to collect royal blue glassware, chicken and pig figurines and the apple figurines her students gifted her but her passion was music. She received piano lessons in elementary school and played for her first wedding at age 13. Geri also loved to sing in church choirs and the Oriana Chorale, a group of local church choirs who performed at Christmas time. A delight for her family was when she would call on their birthdays and play
the Happy Birthday song in about five different music genres. She played piano for weddings, funerals and church services until her fingers could not reach the keys anymore in her retirement. She practiced most every day as it calmed the Parkinson’s disease she had for many years. She died of complications from it on September 6, 2020.

The family would like to thank all the family and friends who cared for her with visits, food, hospice care, love and prayers. No services are scheduled at this time due to the pandemic crisis. In lieu of flowers, memorials may be made in Geri’s name to the Parkinson’s Foundation, 1-800-473-4636, contact@Parkinson.org.