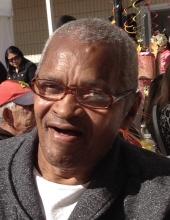 Born: March 5, 1951 – December 28, 2019
Henry Alexander Davidson was born in Statesville, NC. As a child he moved with his family to Hollister, CA . He attended local public schools and graduated from San Benito High School with the “Class of 70”.
Henry was an artist and musician. Also known as “Sticks” he will be remembered for his natural and extraordinary talent playing the drums. He played in the Mongoose Band and took stage at many local gatherings. Henry brought people together with music and dance. He also worked as an auto body and paint man.
Preceded in death by his parents, Clozell and Eileen Davidson; also brother and sisters: Clozell and Loretta (wife) Davidson, Bertha Davidson, Betty Adams, Jackie Davidson, Julia Davidson. He is survived by sister, Brenda Davidson; brothers, Claude and Joyce (wife), William and James Davidson.
Graveside burial service will be held at 11:00 AM on Friday, January 10, 2020 at the IOOF Cemetery, 600 Buena Vista Rd. Hollister, CA 95023