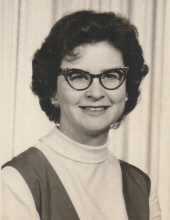 Lenora was born the youngest of 11 siblings to Exro and Ida May Ridgeway in Faxon, Oklahoma. She was married to Raymond B. Wilson in Chattanooga, Oklahoma on June 19, 1953. Lenora is survived by her husband Ray, son Forest Bryan, daughter-in-law Jillian, and grandsons Simon and Jackson, all of whom live in Hollister, California.

Lenora graduated from Hollister High School in 1954. Shortly after, she started a job at Baughmans’s department store, and later on at Holex as a Quality Control Tester. In her time at Holex she won Craftsman of the Month and Year awards. She later joined her husband, working at his sporting goods store in Gilroy called Ray’s Sportland. Lenora was very dedicated to church work and went on missionary trips to the Philippines for the Church of Christ. She loved to sing, play piano, read, and watch John Wayne movies.

In lieu of sending flowers, the family requests that you make a donation to Agape Villages Family Agency in Lenora’s memory: