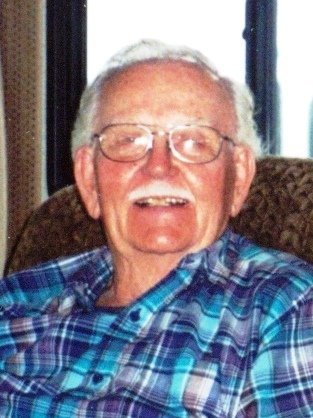 Jim was born in small town in Indiana just over 95 years ago. He began a lifetime of hard work at an early age, and grew to become: Soldier (WWII Army Air Corps), Graduate Engineer (Tri-State College, Angola, IN), farmer, devoted husband, and father. Jim was a born do-it-yourselfer, and re-purposer, long before DIY and recycling became common household words.

Jim loved God, country, family, and deeply cherished nature. Nothing made him happier than exploring, and traveling back roads in their motor home. In 1979 he retired from Lockheed, and their business ROCK CRAFTERS was born. Now he could combine business, plus pleasure, while they searched for rocks to sell at Art & Craft shows, as well as Gem and Mineral Pow-Wows for the next 25 years.

Oh, if he could have just climbed into his truck, driven down those quiet roads, away from the fog, and frustration of worsening dementia! But Jim, who could always fix anything, could not fix this. Within the last 2 1/2 years he was compassionately cared for by the staff and employees of Mabie Northside.

We who mourn Jim are eternally grateful for the love they lavished on not just him, but our whole family as well. A “cradle catholic”, Jim was an active member of St. Benedict Parish.

A Mass and Blessing will be celebrated sometime in the future.

Jim is survived by his wife Maryann, five children, and their spouses: Mike and Rodger, Ann and Curt, Pat and Gloria, Chris and Tammy, Kathy and David–as well as grand-children and “greats”.