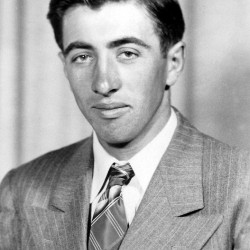 Joaquin Souza made his way to a greener pasture on Monday, November 26th surrounded by his loved ones in Monterey, California. He was born March 11th, 1920 on Pico Island, Azores, Portugal to Manuel and Jacinta Souza and immigrated to Camden, California in 1922. The family purchased a 60-acre ranch in Kingsburg, California in 1936 where he learned to milk cows, pull the plow, and gained his appreciation for living down by the river. Even at a young age, Joaquin was an avid prankster; including one of his favorite stories about sneaking a possum into his elementary school classroom to cause a ruckus. While he attended school, he had the opportunity to take a woodshop class where he discovered his love for woodworking. He graduated from Hanford High School in 1938 and helped out on the ranch until he ventured out on his own in the early 1940s. During this period, Joaquin learned how to make flavored soda water, delivered milk jugs, and spent 2 years working in a lumber camp in Felton, California, before making his way up to San Francisco to work graveyard shifts as a dock patrolman during WWII.

(Photo of Joaquin on a telephone pole in Half Moon Bay in 1944.) On one of his trips back to the valley, he was introduced to Mary Agnes Rocha of Fresno, California.

Joaquin and Mary began exchanging letters and they soon married in 1947 at Our Lady of Perpetual Help Church in Clovis, California. The newlyweds moved into a small ranch in Hanford, California where they began their family and moved to Santa Cruz in 1957. Joaquin began working for Granite Rock as a teamster where he drove concrete mixers until 1988. Throughout his career, Joaquin also worked other skilled trades.

Joaquin lived his life full-steam ahead. He loved cars and in his lifetime bought/sold 108 different vehicles.

He also had a genuine love for animals and people. (Joaquin with grandson Danny at Hollister Car Show 1999.)When not riding his bicycle around the neighborhood to keep up with all the neighbors, spending time with his grandchildren, and and frequent outings to Hollister Airport to admire vintage planes. He never lost his love for woodworking, sketching, and loved to spend his retirement crafting custom birdhouses. Joaquin was an incredibly hard worker and made sure to instill his work ethic in his children with whom he often worked alongside. Joaquin loved his family and would do anything for them; including chopping puncture vines on his grandchildren’s streets with a shovel so they could ride their bikes without getting flat tires.

Joaquin was preceded in death by his parents, Manuel and Jacinta Souza; his siblings, Manuel Jr, Mary and Joe Souza; and his children, Joaquin and Loretta Souza.

(Photo of Joaquin and Mary Souza in 1997 with their grandchildren.) Services will be held on Tuesday, December 4th at Immaculate Conception Church in Tres Pinos, California. Rosary will begin at 10:00am with services and reception to follow. Private interment at Holy Cross Cemetery in Santa Cruz, California. Remembrances may be made to the WoundedWarriorProject.org, or the Ave Maria Senior Living Facility, Monterey.