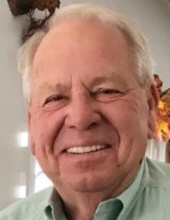 John Patrick (Pat) Stafford, beloved husband, father, son, “grumpy”, and uncle, passed peacefully on his 70th birthday, with his beloved family by his side. He contracted COVID in late December.

Pat was born January 6, 2021 in Brawley. He attended schools in San Diego, Brawley, and Norwalk, before graduating from BUHS in 1969. During high school he bought a red Fender guitar and emjoyed playing in several rock bands. Pat worked summers for his step-father, Troy Haggard, as a land leveler. After high school, he moved to San Luis Obispo to attend Cal Poly. He chose to leave college and begin a career in agriculture, moving to Blythe where he owned JPS Land-leveling. During that time he met and married Gayla Peek. They had a daughter, Shelly Stafford Crecelius. In Blythe, Pat was an active member of the Jaycees, serving as president for one year. He acted as the club Santa Claus, passing out gifts to children at Christmas. Eventually Pat moved north to continue his career in agriculture. He met Kenna Taylor on one of his trips to the Valley. They would have been married 20 years May 11 of this year. At the time of Pat’s passing he was well-respected Director for Harvest Operations for CB Harvesting. He split his time between his home in Aromas and the Imperial and Yuma Valleys.

Pat was preceded in death by his grandparents, Ike and Lula Stafford, with whom he lived between the age of 3 and 8, grandparents, Pat and Ethel Carradine, brother Scott Joseph, step-father Troy Haggard, and step-mother Shirli Stafford, and dog Spike.

He is survived by his wife, Kenna (Taylor) Stafford, daughter Shelly (Stafford) (Cris) Crecelius, sons, Bradley Brock, Travis (Andra) Brock, and daughter Megan (Kevin) Stewart. Pat was the very proud and loving “grumpy” to Caylee and Cadence Crecelius, Jameson Brock, and Paxton and Ryann Stewart. Pat leaves his parents, Duane Stafford, Palm Springs, and Pauline Haggard, Brawley. He also leaves behind his sisters Alexa (Andy) Horne, Tori (Mark) McBroom, Loxi Greenfield, Eldona (Dick) Crounse, and Kari (Todd) Love; brothers Lee (Ti) Conyne and Rod Conyne. He will be missed by nieces and nephews who will always remember his generosity and sense of humor. He also leaves many friends in the Central and Southern California farming communities, and his buddies at the House of Knowledge, with whom before COVID, he would meet, and share lively discussions about farming and world events.

In lieu of flowers, please feel free to send donations to the Alzheimer’s Association, Imperial/San Diego Chapter at alz.org, in Pat’s name, or another charity of your choice.