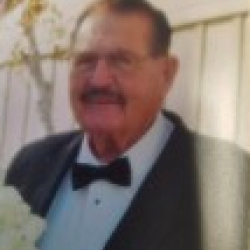 John was born on Oct. 11, 1928 in San Jose and passed away in Hollister on Nov. 21, 2018 surrounded by family and friends. He was self employed and preceded in death by his parents, George and Isabel, his brother, Earl Richardson and a son, Bruce Richardson. He is survived by his wife of 49 years, Rosanne, his childlren, Robert Richardson (Diane) and Diana Garcia of Hollister, KIm Herrera (Robert) of Coarsegold, Darbie Ricotti (Pat) of Hollister, granddaughter, Mashawn Herrera Ensz of Atwater, great grandchildren, Courtney Herrera of College Station, TX and Preston Ensz of Atwater.
Per John’s request, no services will be held.