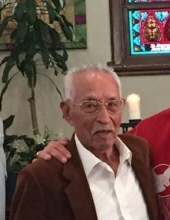 Jorge Pasillas Cabrera passed away at his daughter’s home in Hollister at the age of 92. He was born in Torreon, Coahuila, Mexico and lived in Hollister for over 50 years. He attended Old Mission San Juan Bautista, was a member of the United Farm Workers and was an avid soccer fan especially Santos Lagona soccer team.
He married his wife, Julieta in 1950 and she preceded him in death in 2015. He is survived by his children, Jorge Luis Cabrera (Norma) of San Juan Bautista, Ignacio Cabrera (Elvia) of Hollister, Juan Antonio Cabrera (Ana Rosa) of Hollister, Esther Cabrera of Mexico, Elsa Vasquez of Hollister, Enriqueta Cabrera (Erasmo Hernandez) of Mexico, Isabel Gutierrez (David) of Stockton and Alejandra Cisneros (Francisco) of Hollister, his grandchildren, Clara, Alicia, Anita, Julieta, Jorge, Arturo, Eddie, Teresa, Esmeralda, Mariela, Alejandra, Diana, David, Nora, Isaac, Isaias, Jordan, Salome, Sara, Elizabeth, Jenette, Enrique, Eliseo, Israel and Adam. He is also survived by 25 great-grandchildren and two great-great-grandchildren.
Two grandsons, Jeremiah and Pedro, preceded him in death,

The Rosary will be on Thursday, January 9, 2020, at 7:00 p.m. at Black Cooper Sander Funeral Home. The Mass will be on Friday, January 10, 2020, at 10:00 a.m. at Old Mission San Juan Bautista with committal following at Calvary Cemetery.
Friends can pay their respects after 1:00 p.m. on Thursday at the funeral home chapel.