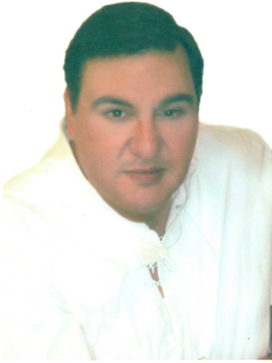 Khristopher Francis Flores passed away August 9, 2019 following a sudden illness and lifelong battle with diabetes. Khris was born in Hollister, Ca on April 15, 1961 to Eugenia (Fortino) Flores and Francis Flores. Khris attended Sacred Heart School and San Benito High. Khris developed a love of music as a child and learned to play the piano and guitar. His love of music would be the foundation of his life. He went on to teach music at Sacred Heart School in the mid to late 80’s. Khris had a great rapport with kids, and loved his time teaching at Sacred Heart. “He was LOVED at the school by all”, said Gary Byrne, CEO CFFSBC.

Many in the community will remember Khris as a talented singer. He was often the go-to choice as a wedding or funeral singer, and brought the house down with his beautiful voice. His love of entertaining turned into a full-time career where he became quite successful as a stand-up comic and songster. Often combining his wit and writing ability and creating a song on the spot from a few words thrown out by his audience. This was always a favorite part of his act. His talents took him to all parts of the country and he became a regular at venues on the East Coast, and spent part of each year there.

Khris was also well known for his philanthropy. He was often asked to perform for local non-profits to raise money for various causes and was happy to give of his time and talent.

Khris will be well remembered as a talented musician, singer, song writer and comedian. He was also a man that put family first and loved his family and friends with his whole heart. Khris was happiest when baking with his Nana, orchestrating sing-a-longs at family gatherings, and making us all laugh, he also enjoyed the Casino’s on occasion! Although gone too soon, Khris died as he lived, on his own terms and unapologetically. We will miss him dearly.

Khris was preceded in death by his mother, Eugenia (Genie) Flores, and his sister Kimberly Flores. He is survived by his father Francis Flores, Uncle Gene Flores; Aunts Ginger Guerra (Joe) and Geri Wilson (Bill), close cousins and numerous Flores and Fortino relatives.

Contributions are preferred to the Student Recognition Fund – Spring Grove School; Hospice of the Central Coast or the Diabetes Association c/o the funeral home.