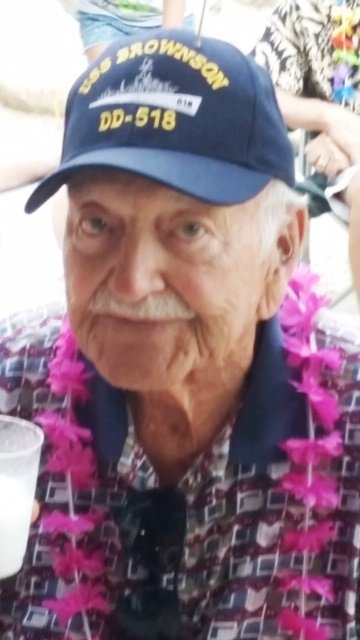 On Wednesday, December 25th Layton L. Stephens Sr, at age 95, passed away peacefully at home with family by his side. He was born August 12, 1924, in Shattuck Oklahoma, to William Albert ‘Pat’ Stephens and Liona Captilla Hurley. Shortly after his birth his family moved to California and finally settled in Hollister where he spent his childhood. A WWII Veteran, he enlisted in the Navy in January 1942. He is a survivor of his ship being bombed and sank in December 1943 during the Battle of New Britain. Married Opal G. Bruner, October 5, 1944, and had 3 children, Beverly Clark (Livermore Ca) Layton ‘Scoop’ Stephens Jr. and wife Shirley (Cain) (Springdale Ark) and Barbara White of (Prunedale.) He joined Operation Engineers, in 1950, to start working at Kaiser Permanente in Salinas and moved to Prunedale in 1951 where he has lived ever since. He retired in 1986 from Granite Rock, in Aromas. He was a Charter Member of Prunedale American Legion Post 593, serving as their Commander two separate times and was awarded a Life Membership for work he did over many years. He was active in FFA while his son and grandsons were in high school. He enjoyed being with all the kids and they loved him, like anyone who ever knew him. He enjoyed traveling the state for High School Rodeo with his nieces. He married Frances Burgess Lewis of King City, May 23, 2002. Besides his three children he is survived by six grandchildren Dwayne Woods (Livermore Ca) Kenny Horner Jr (Prunedale) L’Donna Stephens (Springdale Ark) Marty Horner and wife Karen Dubelle (Fort Bragg, Ca) Karrie Babington and husband David (Oxnard Ca) and Heather Culpepper and husband David (Fayetteville Ark) He has Eleven great-grandchildren, 5 great-great-grandchildren and numerous nieces, nephews and cousins. Preceded in death by Wives Opal Stephens (1987) and Frances Burgess Lewis(2019). Siblings William Stephens (1943), Robert ‘Bob’ Stephens (2002), Patricia Pedrazzi (2012) and Jim Stephens (1992). Father (1966) and mother (1969). No Memorial is scheduled at this time.

In lieu of flowers, we ask to donate to Hospice/VNA of Salinas or SPCA of Monterey County.