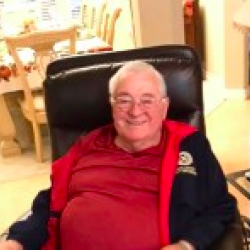 Leonard J. Poletti passed away at his Hollister home at the age of 87. He was born in Hollister and lived here all of his life. He married his wife, Beverly, in 1950 at Sacred Heart Church. He served in the US Navy during the Korean Conflict, Hollister City Council and was mayor for 9 years, The Hollister Exchange Club (Past President), Knights of Columbus, Sacred Heart Church, American Legion, Swiss American Club, CA and American Ambulance Association, San Benito County Emergency Medical Committee and Hazel Hawkins Hospital Foundation.

He is survived by his wife, Beverly of Hollister, his children and their spouses, Dennis Poletti and Nada Sparling Poletti of Hollister and Linda and Keith Keller of Hollister, his sister, Helen Casillas of Hollister and his grandchildren and their spouses, Ryan and Cari Keller, Aaron and Alexandria Keller, Jace and Brooke Poletti, Tamara and Steven Malekos and Tyler and Katie Poletti and 11 great grandchildren. He is preceded in death by his brother, Burt Brughelli and his grandson, Zane Poletti who died in 2015. He is also survived by his two dogs, Chico and Latte.

Friends can pay their respects on Wednesday, March 20, from 1:00 PM until 8:00 PM at Black Cooper Sander Funeral Home.

The Mass will be on Thursday, March 21, at 1:00 PM at Sacred Heart Church. Friends can meet at the church for the Mass. Entombment will follow at Calvary Cemetery.