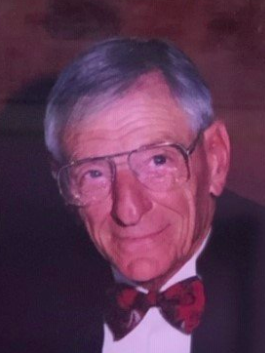 It is with great sadness that the family of Elisha “Lou” Morgan, Jr., 86, of Hollister. California, announces his passing after a battle with pancreatic cancer at his residence on July 21, 2019.   Lou died peacefully surrounded by his loving family. Lou was the beloved husband of Raquel M. Morgan.

Lou was born October 7, 1932 to Elisha L. Morgan and Jessie E. Rowell of Seattle, Washington. He grew up in Alki Point and attended West Seattle High School. He always remembered fondly his days as a “kid from Alki Point.” After graduation, he enlisted in the United States Navy and proudly served as a Seaman stationed in Pearl Harbor, Hawaii, and was assigned to the USS Wandank (ATA-204).

Upon being honorably discharged from the Navy, he began his lifetime career in banking. Lou worked for 63 years as a well-known and highly respected banker in the community, working for Bank of California, Bank of Tokyo, California First Bank, Bank of Santa Clara, Legacy Bank, Bridge Bank and Pan Pacific Bank.

Lou met his wife, Raquel, while working for Bank of Santa Clara and they were married on October 9, 1993.

In addition to Lou’s long career in banking, he was a devoted 49er’s fan and was a very enthusiastic season ticket holder and avid fan for his entire life. “Go Niners!” Lou loved to travel, and greatly treasured family get-togethers and spending time with his “his honorary nephews,” grandchildren and great-grandchildren. He was their Pop Pop, and will be greatly missed by all who knew and loved him.

Lou was preceded in death by his parents and his son, Jeffrey Morgan.

There will be a Visitation on Tuesday, July 30th, from 4 p.m. to 8 p.m. with the recitation of the Rosary at 7 p.m. at Grunnagle-Ament-Nelson Funeral Home, 870 San Benito Street, Hollister; followed by the Funeral Mass and Rite of Committal on Wednesday, July 31st, at 11:00 a.m. at St. Benedict’s Catholic Church located at 1200 Fairview Road in Hollister. A Celebration of Lou’s life will directly follow the services.

In lieu of flowers, the family requests that any donations in his memory be made to Salinas AA Central Office for Alcoholics Anonymous, 9 West Gabilan St., Suite 11, Salinas, CA 93901.