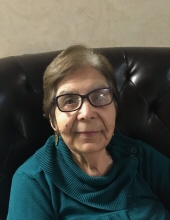 Luz Maria Corona Melchor passed away on February 27, 2020, in Hollister at the age of 92. She was born in Valle de Santiago, Guanajuato, Mexico and lived in Hollister for over 50 years. She married her husband, Angel, in 1949 in Guanajuato. She was a member of Sacred Heart/St. Benedict Catholic Church worked in the local cannery and was a member of Teamsters Union Local 890. She enjoyed gardening, cooking and sewing.
She is survived by her husband, Angel Melchor of Hollister, her children, Josefina Gonzalez (Felipe) of Hollister, Maria Luz Pasillas (Francisco) of Hollister, Miguel Angel Melchor (Teresa) of Hollister, Jose Melchor of Hollister, SanJuana Campos (Eriberto) of Fresno and Maria Payvar of Modesto, her sister and brothers, Porfiria Prieto of Hollister and Vicente Corona of Gilroy and 15 grandchildren and 6 great grandchildren. She is preceded in death by three brothers.
Friends can pay their respects on Monday, March 9, 2020, from 1:00 p.m until 9:00 at Black Cooper Sander Funeral Home. The Rosary will be at 7:00 p.m.
The Mass will be on Tuesday, March 10, 2020, at 11:00 a.m. at St. Benedict Church with interment to follow at Calvary Cemetery.