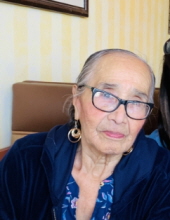 Maria Concepcion “Concha” Tamez (Rodriguez) of Hollister, passed away at Good Samaritan Hospital in San Jose on January 23, 2020, at 93 years.

Maria was born on December 8, 1926, in Montemorelos Nuevo Leon, Mexico to Maria De La Luz Castro and Jose Tamez Suarez.
Maria married Jose Rodriguez in 1946, after following the crop worker from Texas to Colorado, The couple settled in Hollister, California in the early 1960s, where they raised their thirteen children.
Maria is survived by her children; Jose (Irma), Ricardo (Paula), Armida (Roberto Gonzalez), Manuel (Gloria), Robert (Araceli), Ruben (Ludi) Alicia, Arcelia, Juventino (Martha), Enrique (Patti), Josefina (Juan Cruz), Dalia, Jorge (Kathy). Also survived by her siblings; Angel, Ernesto, Guadalupe, Herlinda. Eva, Josefina, & Domitila
Maria was very proud of her family and was excited to become “Abuelita” to her 36 grandchildren, 33 great-grandchildren and one great-great grandchild. Maria loved holidays and family get-togethers; spending time with her friends at the Senior Center, playing bingo, sewing yo-yo’s, knitting and enjoyed going to the casinos. She would spend hours cooking and preparing for her family, we especially remember the warm aroma of homemade tortillas in the house.
Maria was known for her feisty, yet good sense of humor. She will be missed by all that knew and loved her. Maria was also very special to her caretaker, Dona Luz and to her husband Pablo and family members including many nieces, nephews and family in Mexico, Texas and California.
Maria is preceded in death by her former husband, Jose Rios Rodriguez, her five young children aged birth to four years old.