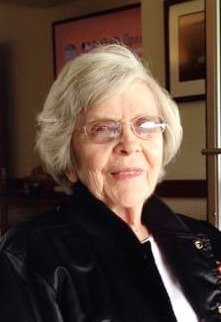 Minnie May Yant, a 72-year resident of San Benito County, passed away on Friday, May 1, 2020, after a lengthy illness. She passed away peacefully, surrounded by family in her son’s home in Newport Beach, California. She was 95.

Minnie May Sheibley was born on August 24, 1924 in her family’s home on a farm belonging to the family of her mother, Aura Sheibley, near Collins, Iowa. She grew up on that land, operating farm equipment before she was old enough to drive a car as she helped her family hold on to their farm during the Great Depression.

She attended Simpson College in Indianola, Iowa where she earned a teaching degree. On a summer visit to California with her mother, she met Bob Yant, who had recently returned from serving in World War II. It wasn’t long after that visit that she moved to Hollister in 1947 and married Bob Yant. The two were married for 64 years, until Bob’s death in 2012.

After settling in Hollister, Minnie May went to work as a teacher in Hollister. A reading specialist, she was asked to work with special needs students and became the teacher of San Benito County’s first special education class, as it was called at that time.

Her career in the classroom ended with the arrival in the early 1950s of her two sons. As a mother, she was involved in every activity involving her children, from den mother of the Cub Scouts, organizer of 4-H activities, and a dedicated member of the PTA at every school her boys attended. When her sons got older, she worked in the bookkeeping department of the family business, Enterprise Electric. While husband Bob was known as the boss of the business that operated for more than 60 years on San Benito Street, Minnie May was a full partner in every Yant family venture.

Minnie May was an avid golfer and won her share of honors as a member of the women’s clubs at both Bolado Park and Ridgemark. She made three holes in one during her golfing career. Minnie May and Bob were the proud owners of the first membership at Ridgemark Golf and Country Club. Minnie May also enjoyed playing bridge and was active in a number of bridge clubs. She was a member of Hollister United Methodist Church for more than 70 years.

While her family was always her No. 1 passion, the San Francisco Giants were a close second. She followed all of their games, either on the radio or television. When her grandson Robby went to work for the Giants in guest services, he invited his grandmother to a special employee event so she could proudly pose for a photo with three World Series trophies. That was a memorable moment in her life, but unusual, because it was almost always Minnie May who was doing kind and considerate things for everyone else, from family to friends. Helping others was the way she lived her life.

She moved to Newport Beach in November of 2019 to live with her son, Bob Jr. and his wife Ann. In addition to Bob and Ann, she is survived by her son Larry and his wife Abbie of San Francisco and three grandchildren, Jessica Yant of Costa Mesa, Robby Yant of Calabasas, California and Jackson Yant of West Lebanon, New Hampshire. She is also survived by two sisters, Harriet Vander Ploeg of Colorado Springs, Colorado and Marvel Bahnsen of Schleswig, Iowa. In addition, she is survived by many nieces and nephews and their families and many friends. She was preceded in death by her brother, Bill Sheibley. The family would also like to acknowledge and thank Minnie May’s loyal and kind caregiver, Kathleen Church.

In Lieu of flowers, the family requests donations in Minnie May’s memory be made to the Hollister United Methodist Church, 521 Monterey Street, Hollister, California 95023 or c/o the mortuary.

Acelebration of Minnie May’s life will be held at a later date.