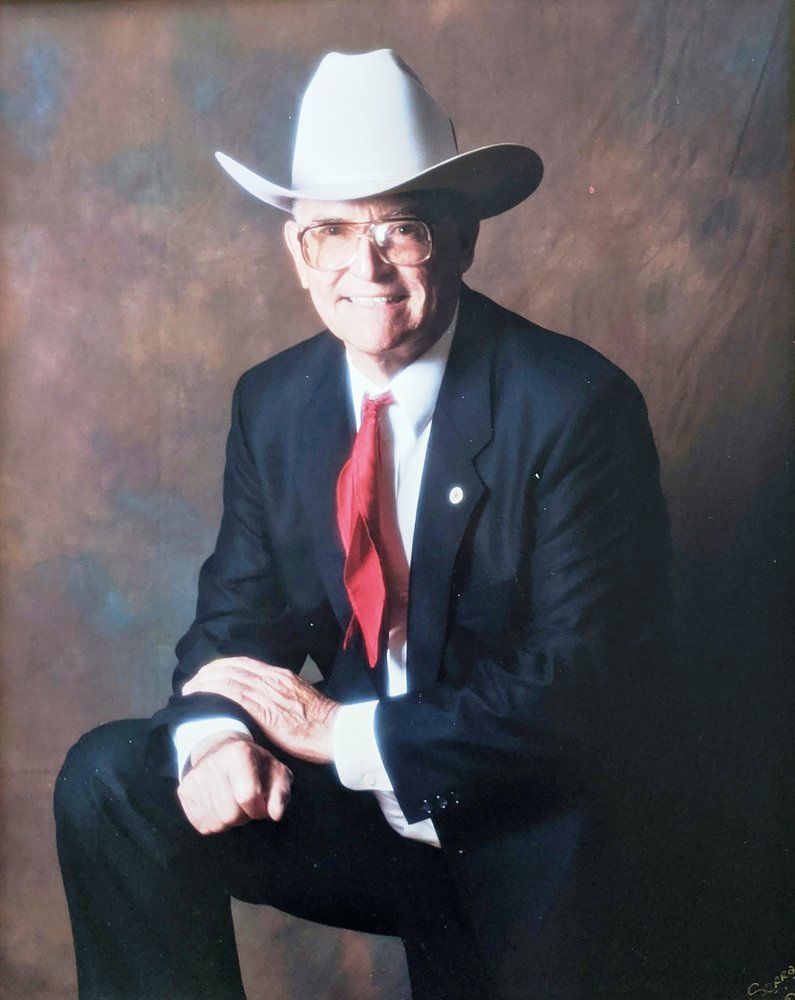 Peter Clay Frusetta, “The Cowboy in the Capitol,” passed away peacefully after a long illness on February 26 at the age of 87.

Peter was born on July 6, 1932 in the old family home on “F” Street in Tres Pinos.  His parents were George Joseph Frusetta and Ruth Hodges Frusetta. Peter was very proud of the fact that the Frusetta Family have been raising cattle in San Benito County since 1875.

Peter was an extraordinary and colorful character. He lived a full, rich life and was a fount of information on the local flora, fauna, and history of San Benito County.  In addition to cattle, he loved chickens, and collecting antique envelope covers and stamps. He also enjoyed playing tennis with his family and friends at Ridgemark Tennis Club.  He spoke excellent Spanish and had a deep and abiding respect of the Vaquero traditions.

Peter attended Tres Pinos Elementary School, where his mother was the principal and teacher of the upper grades in its two-room school. He then attended Hollister High School, where he played on the varsity football, basketball, and baseball teams (he held SBHS records for his Pitching Earned Run Average and Highest Batting Average for decades).  Peter went on to graduate from Stanford University in 1954 and attended both Stanford’s Graduate School of Business and the Technical University of Guadalajara in Mexico. 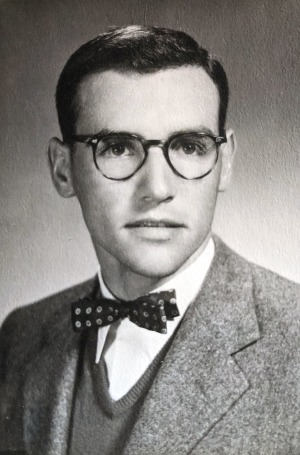 He served in the United States Army in Germany from 1954 to 1956.  He trained as a cook and suffered many jokes about peeling potatoes.  However, his training instilled in him a love of cooking which continued for the rest of his life.  He was especially known for his cured olives, beef and venison jerky, salsa, horse beans, sourdough pancakes, and homemade wine.

When Peter came home from Germany he went to work on his family’s cattle ranch, carrying on in his father’s footsteps.  His family had holdings in San Benito, Fresno, Merced, and Madera Counties. It was hard work, but Peter loved it. He married his wife, Anita Filice, had four children, and settled down in Tres Pinos.

Peter had a great love of local history and was always happy to share his knowledge.  He spent five years interviewing local old-timers and chronicling their stories.  He proudly published, “Beyond the Pinnacles: The History and Folklore of Southern San Benito County” in 1989.  He followed that book up with “Quicksilver Country: California’s New Idria Mining District,” “Tres Pinos: Its Colorful Past,” and “Working Cattle Correctly:  A Cowboy Tutorial.” The beautiful prose in his books is illustrated by his dedication to his mother at the beginning of “Quicksilver Country,” “to my mother and teacher, Ruth Hodges Frusetta, who helped me appreciate the subtle beauty of the fall countryside, the ancient figures in the star-filled sky, the development of a seed into a mature stalk of grain.”

When his sons Robert and Jack finished college, they came to partner together with Peter on the ranches.  They raised and sold beef cattle, with Peter being ahead of his time in selling hormone-free and antibiotic-free beef.  After many years, he felt as though he had been so blessed in life that he wanted to give back to his community. He decided to throw his hat into the ring and run for the California State Assembly.

Although Peter lost his first race for the State Assembly, he wasn’t a man to give up.  He won after running for a second time in 1994. Wearing his trademark Stetson, he represented the sprawling 28th Assembly District, which included San Benito County and portions of
Monterey, Santa Cruz, and Santa Clara Counties.  Interviewed in Sacramento after he was sworn in, 62-year-old Peter said, “I’ve never had my own office before. My office is right in the kitchen.  Except in the campaign, when we moved the picnic table into my son Jack’s room.″

During his distinguished tenure with the California State Assembly, he personally authored numerous bills that have been signed into law, and he also worked to enact hundreds of other measures by co-authoring or assisting with legislative negotiations and compromises.
Additionally, he wrote a weekly article for The Pinnacle Newspaper called “The Cowboy in the Capitol.” He kept his constituents informed of political news from Sacramento, and also entertained them with colorful stories and observances of San Benito County’s nature and countryside.  He was elected for three terms of office and served from 1994-2000. In his retirement years, Peter married his second wife, Helen Bettencourt.  He enjoyed going to garage sales, collecting things that interested him, working in his garden, and picnicking at the Ranch.

Peter loved writing long, flowery and poetic letters to family and friends to keep in touch and to talk about his beloved San Benito Ranch.  He always had paper and pencil handy for when inspiration struck. These letters, along with his many stories and books, will keep him alive in our hearts and memories forever.  His last whispered words to his son Robert were, “How’s the grass at the Ranch?”

A Service will be held on Friday, March 6th at 2:00 p.m. at Grunnagle-Ament-Nelson Funeral Home in Hollister.

In lieu of flowers, donations may be made to Sky’s the Limit Fund, Sobrato Center for Nonprofits, 510A Valley Way, San Jose, California 95035 or to the San Benito County Historical Society, 498 Fifth Street, Hollister, CA 95023.