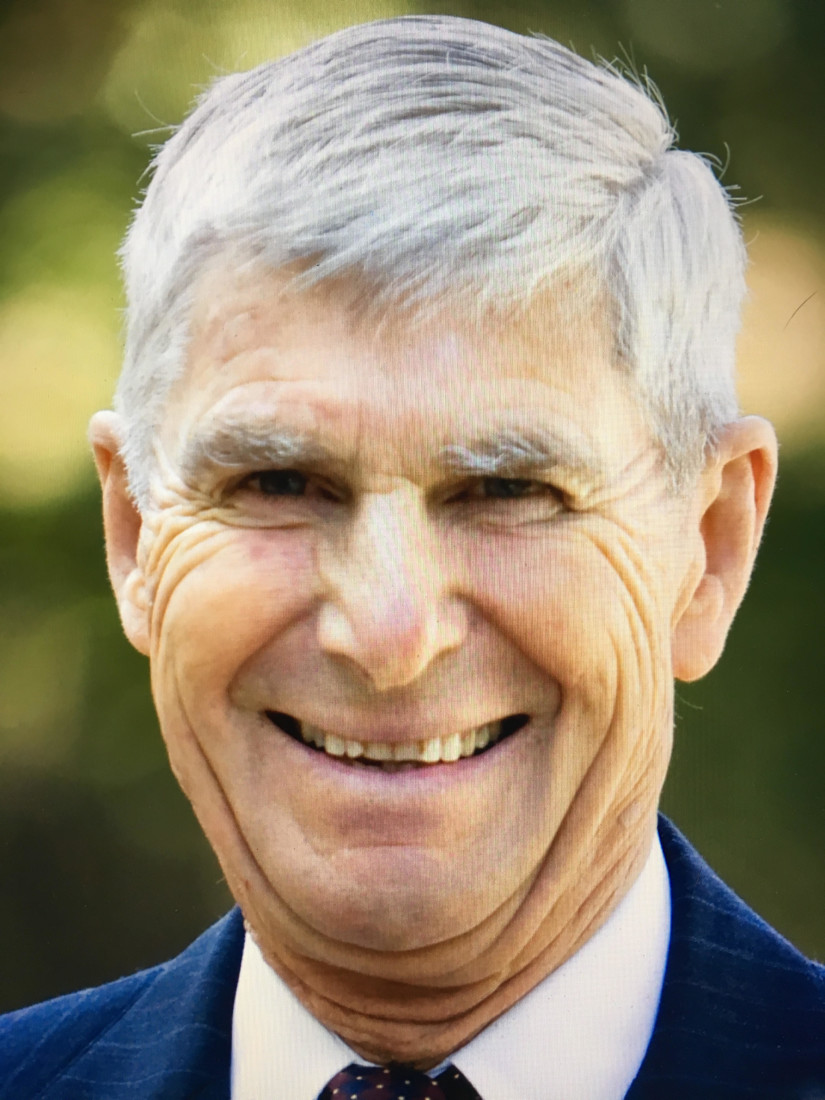 Richard Bernard Morris was born March 9, 1930, in Alameda, California, to Thelma T. and John E. Morris.  He was the fifth of seven children.  His grandmother, Baba, lived with them, and she and Rich were good friends. He recently recalled her good-humored, pacifying effect on their family life and the wisdom he learned from her.  “She just accepted what came,” he told us.  In this spirit, he passed away quietly in his sleep at home surrounded by his family on Tuesday, January 21, 2020.  He was 89, a number that he found more than a little disappointing, so we’ll call it 90. His sense of humor never faltered even in his last difficult days.

Rich grew up during the depression in Piedmont, California.  He attended Havens Elementary School and Piedmont High School, where he played basketball – winning 1947 “Player of the Year” – and was the head yell leader.  He attended the University of Santa Clara for one year prior to entering the Society of Jesus, living first at the Jesuit Novitiate in Los Gatos, California, and then at Mount Saint Michael Scholasticate in Spokane, Washington. In 1955, he left the seminary to join the army.  He was stationed at the headquarters of the 2nd Armored Division in Bad Kreuznach, Germany, for two years, and liked to joke that he’d been a parachuting typist.  Though those were trying times in Germany, army service was an experience Rich looked back on fondly.  He loved being able to travel, get to know fellow Americans from all walks of life, and make dear friends.

After the Army, Rich finished his Bachelor of Arts degree at UC Berkeley and attended law school at Boalt Hall (Berkeley Law).  It was at Berkeley that he met his best pal and true love, Anne “Bummie” Baumgartner.  They were married at Mission San Juan Bautista on September 12, 1959.  He always loved telling the story of how their engagement announcement in the San Francisco Chronicle read “accomplished horsewoman marries law student.” The banality of the description of his burgeoning career alongside the celebration of the accomplishments of his betrothed always made him laugh and brought him joy.  He knew and always acknowledged he was “marrying up” when he married “Bum.”

Rich’s legal career was notably not banal.  He entered private practice in 1960, first at Chickering and Gregory, and then at Feldman, Waldman, and Kline, both in San Francisco.  While in private practice, he began doing pro bono legal work and found his passion.  In 1968, when San Francisco was chosen as one of twenty cities to receive Ford Foundation funds directed at increasing the number of lawyers involved in pro bono work, Rich was hired as the first Executive Director of the new San Francisco Lawyers Committee for Urban Affairs (now Lawyers Committee on Civil Rights). He loved bringing people together to solve problems, and his years first with the Lawyers Committee and subsequently with the San Francisco Bar Association, the American Bar Association and the California State Bar Association, bringing lawyers, organizers and community leaders together to work for civil rights for all were, professionally, some of his most gratifying.

Equally gratifying was Rich’s family life and his role as “Papa”.  Together, he and Anne had eight children: Amy (Melanie Thompson), Joe (Julie Finigan Morris), Ellen Morris-Knower (Jim), Margaret Petkiewicz (Jim), Molly, Caroline (Ger Moore), Katie (Joshua Hoffman), and Richard Jr. (Kimberly Jo Morris).  His family was his joy.  He had an uncanny ability to be interested in all of his children and grandchildren, as well as their spouses and friends, as individuals.  He was a generous, funny, original and supportive father, father-in-law and grandfather.  He was ever a great role model who held us all to high moral and ethical standards.  Above all, he was a good friend and the best partner Anne could ever have imagined.

Rich was a devout Catholic who believed that work on behalf of the marginalized was fundamental to being a follower of Jesus.  Further, he was naturally attracted to quiet prayer and the contemplation of God’s goodness in all things and people.  As Jesuits would say, he was a contemplative in action, truly a “man for others.” He believed strongly in social justice and instilled these principles in his children and grandchildren.

His life did not lack for adventure. In 1975, when Rich became Director of Communications for the American Bar Association, Anne and Rich moved their tribe to Evanston, Illinois.  They made new friends, discovered a world beyond California, packed the entire family into the station wagon for road trips all over the Midwest and East Coast, and spent many happy days sailing on Lake Michigan.  As their children grew, so did the reach of their travels.  From Peru to Venezuela, London to Oaxaca, South Africa, Hawaii, Italy, Norway and many parts between, they were touched by their experiences and touched many along the way.

In 1998, Rich and Anne began a new adventure when they moved to Anne’s family ranch in San Juan Bautista. At first uncertain of what to do in his new rural life, Rich soon became active in the movement for a more holistic, regenerative approach to land management and worked closely with his son, Joe, and daughter-in-law, Julie, to support their grass fed cattle business. He helped found the Central Coast Rangeland Coalition, and served on the boards of the Soil Carbon Coalition and the Elkhorn Slough Foundation. He was fascinated by the science and excited by another opportunity to bring people from various camps together to work as an effective coalition.

Though Rich reinvented himself many times throughout his life, ever constant was his love of sailing.  Never was he happier than he was on a sailboat.  He loved the challenge of fitting the boat and his strategy to whatever nature offered up in the ever shifting forms of wind and water. He learned to sail and race on his father’s 46-foot schooner, the “Zita II”, and spent childhood summers cruising with his family up the Sacramento River Delta.  Later, he and Anne got away from their growing family with overnights on a Cal 25.  He passed his love of the sport on to his children through adventures on J Boats and lasers on the San Francisco Bay, Lake Michigan and Lake Tahoe.

In 2017, Rich and Anne moved back to San Francisco, where he was delighted to have a window with a view of his beloved Bay. Not a day went by that he didn’t spend time gazing out happily upon its magnificent beauty, and its boats.  His was a life well lived. We hated to see him sail off on his final journey, but we know he is at peace.  We already miss you, Papa.

Rich was preceded in death by his parents, Thelma and John, and brothers, Austin, Jack, and Don. He leaves behind his wife, Anne, of 60 years; his 8 children; his 7 children-in-law, and his 11 grandchildren: Maggie, Jacob, Teddy, and Brigid Morris-Knower; Shayne and Didi Petkiewicz; Sarah and Jack Morris; Isaac and Alice Hoffman; and Charlie Moore.  He is also survived by his siblings, Nancy Morris, RSJC, Bill Morris, and Thelma Clare Morris, and many, many wonderful friends.

In lieu of flowers, the family encourages you to make a donation to one of Rich’s favorite charities: The Lawyers’ Committee for Civil Rights of the San Francisco Bay Area, St. Francis Retreat of San Juan Bautista, Homeboy Industries (Father Gregory Boyle, SJ), the St. Francis Yacht Club Sailing Foundation, or the Community Foundation For San Benito County.