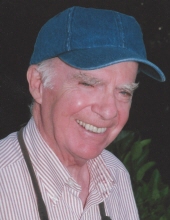 Dick was born to Albert and Margaret Ketcham on August 13th, 1929 in Montclair, New Jersey. After high school, he served in the United States Army Air Corps for a year as an editor of the base newspaper. After his service , he attended Philadelphia College of Art and received a degree in art in 1953.

Dick met his wife, Betty, in the 1940’s at Greenwich High School. They married in Greenwich in 1956 and eventually had two daughters, June and Lynn. After living in Canoga Park , the foursome moved to Mountain View where Dick and Betty would live until 1990. He worked for various companies as an industrial designer, including Lockheed, Ampex, and Triad Systems Corporations. In 1990, he and Betty moved to Bend, Oregon to enjoy retirement. Later on, they returned to California, choosing Santa Rosa as their home.

In addition to being a dedicated and loving father, Dick also loved leading various Bible studies, serving at First Baptist Los Altos, playing ping pong, Monopoly, and checkers, and visiting his favorite place: Carmel. Throughout his entire life, he held an infectious sense of humor and an unwavering faith in Christ, which he shared with those who surrounded him, ever asking how he could pray for those he knew. His favorite ministries were counseling college /career -aged young people and leading retired men’s Bible studies.

Dick is survived by his wife Betty, his daughters June Fountain and Lynn Whiteley, his four granddaughters, and four great-grandchildren.

Dick is buried at Calvary Cemetery in Hollister, California.