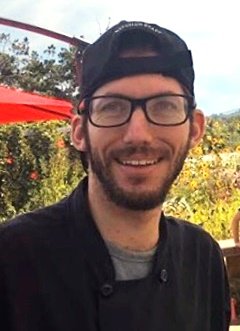 Robbie grew up in Hollister and briefly attended Sacred Heart School before transferring to Chartwell School in Seaside. He graduated from Chartwell in 2002 and went on to attend San Benito High School in Hollister. He graduated from San Benito High School in June of 2006. After high school, Robbie had hopes of various careers before discovering his true passion. While working as a dishwasher at the St. Francis Retreat House in San Juan Bautista, Robbie decided he wanted to become a chef. He enrolled, and attended Cabrillo College, majoring in Culinary Arts.

He loved working the AT&T Golf Tournament as well as the Concours d’Elegance. When Robbie moved to Moss Landing, he serendipitously became neighbors, then friends with his Mobile Manor Trailer Park community. Ray, a neighbor, who became a particularly close friend, and Robbie bonded over their shared love of cooking and music. Robbie loved being around people, radio and television operations, law enforcement, cooking for others, golf, and going on hikes, especially midnight hikes in Big Sur and Monterey.If you met him once, he considered you a friend.

He enjoyed being around his new friends in Monterey, especially Darrell Collins, as well as his long time Hollister friends, Richard Burnham, Alfonso Castillo, Ed Fitz-Henry and others. All have said he was kind, generous, and would do whatever he could to help anybody in need. Yearly, Robbie would save all of his spare change and donate it to the KSBW Share Your Holidays. Robbie is survived by his parents Bob and Mary Kutz; his sister and brother-in-law, Holly and Paul Miller, as well as their four children; and his brother William “Bill” Kutz. He had many loving and caring Aunts, Uncles, Cousins and friends. His life may have been short but it impacted many. He will truly be missed. Robbie will be laid to rest in a private ceremony next to his grandparents. A Celebration of Life will be held for him in the future once the COVID-19 virus pandemic subsidies.

In lieu of flowers, Robert’s family wishes donations be made to Chartwell School or the Juvenile Diabetes Research Foundation.