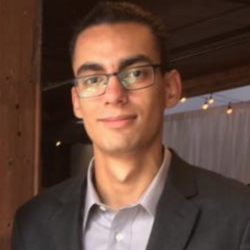 A Mass to celebrate his life will be held at 3 pm this Friday, September 14, 2018 at St. Benedict Church in Hollister, California. Father Robbie Sullivan will be officiating. Following the service the reception will be at the Ridgemark Tennis Center.

Ron ‘Ronnie’ was born in 1992 in Palo Alto, California. He attended Sacred Heart Parish School in Hollister, California and was a proud member of the Boy Scouts of America Troop 428 based in San Juan Bautista, California. He graduated from Saint Francis High School in Watsonville, California in 2010 then continued on to receive a Bachelors of Science Degree in Computer Engineering in 2014 from the University of the Pacific in Stockton, California. He held notable positions as an engineer after graduating from college, and was actively and happily involved in Dagorhir, a foam fighting group in Sacramento, California where he resided.

Ronnie is survived by his parents Ron and Sue Connors, and his sister, Marissa, along with other loving family and friends.

In lieu of flowers, memorial donations may be given to Saint Francis High School at 2400 E Lake Ave, Watsonville, CA 95076 , in memory of Ron Connors.

The Connors family wishes to thank Saint Francis High School and Maechalon, the branch of the Dagorhir group of which he was a member. Heartfelt thanks to family and friends for their
loving support of Ronnie and the Connors family