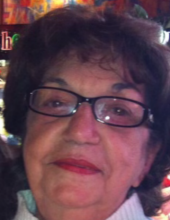 Rosalie Tawney (Polito)- 90 passed away peacefully on January 12, 2021. She was born on February 26, 1930 in San Jose California to Alphonso and Josephine Polito (Pusateri).

Beloved wife of the late John A. Tawney II and Mother to the late Jim Tawney. Loving Mother to sons John A. Tawney III, his late wife Joanne, and wife Debbie, of Coarsegold California, son Richard A. Tawney and wife Helen of Hollister California and daughter Linda Powell and husband Robie of Copper Canyon Texas. Caring sister to Theresa Jepson and husband Lee, and the late Alphonso Polito II of California. Rosalie will be missed by her grandchildren, Cheri, Rich, Jackie, Jill, John IV, Angela, Linda, Gia, Suzet, and Angelina and numerous nieces and nephews. She was the heart and soul of all her great-grandchildren, Kylie, Anthony, Emma, Nick, Tucker, Gianna, Andrew, Marissa, Sidney, Sloan, Cooper, Chase, and Cora.