In May 1942, photographer Russell Lee visited San Benito County, photographing the local, Japanese-American community preparing for internment. His photos will be on display at the Japanese Hall in San Juan Bautista on Saturday, Oct. 7. 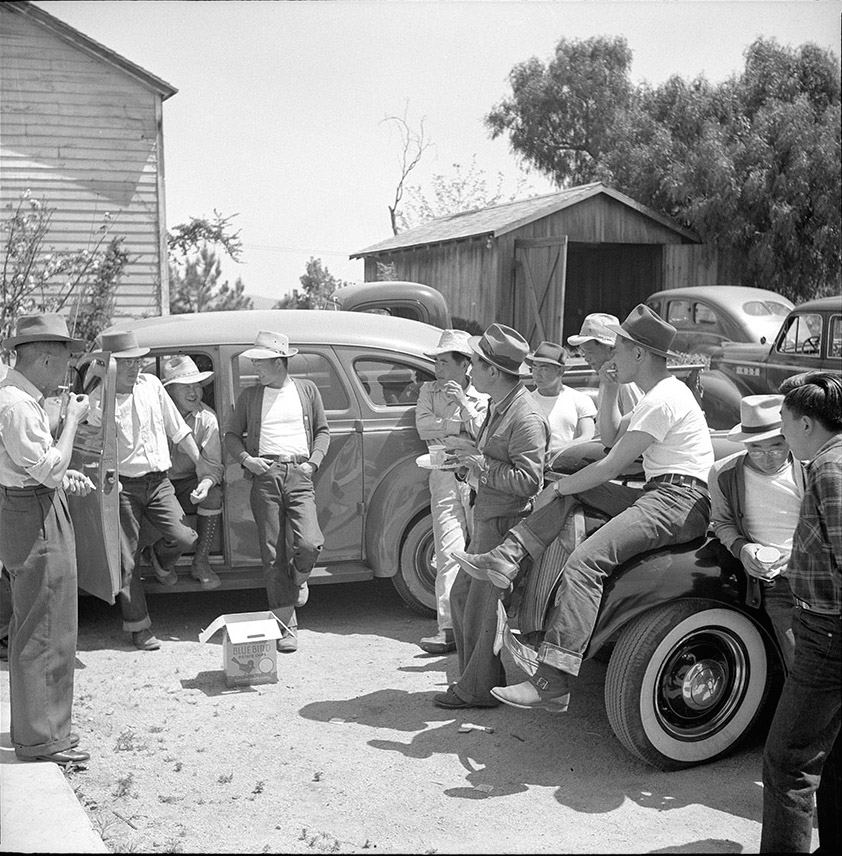 Local Japanese-American men standing outside the Japanese Hall in San Juan, May 1942. Photo courtesy of the Russell Lee collection at the Library of Congress. Nearly a dozen, Japanese-American men are huddled outside, their 1940s-era cars providing a comfortable place to sit in or lean against as they finish their picnic lunch and talk. From the black-and-white photo, it is impossible to know what words were exchanged among them. But within weeks the men and their families would be uprooted from their San Benito County homes and scattered across a system of internment camps established under Executive Order 9066.

The photo is part of a collection depicting the local, Japanese-American community preparing for evacuation and relocation in May 1942. On Saturday, Oct. 7, the 100 images will be on display from 10 am. to 1:00 pm. at the Japanese Hall, located at 708 First St. in San Juan Bautista.

In a telephone interview with BenitoLink, San Benito County chapter of the Japanese American Citizens League President and San Juan resident, Kurt Kurasaki, explained that the pictures were taken by Russell Lee, a photographer for the Farm Security Administration—a Depression-era, federal program that dispatched its camera wielding team across the country to capture life in rural America and the progress made under the New Deal.

Kurasaki was told about Lee’s photos by former San Juan resident, Akira Boch, who had learned about the photographer’s sojourn to San Benito County while attending an exhibition featuring Lee’s other work.

Director of the media arts center for the Japanese American National Museum in Los Angeles, Boch, also discovered that Lee’s collection featuring local, Japanese-Americans was housed at the Library of Congress.

The archive originally contained forty digitized photos, explained Boch in his telephone interview with BenitoLink, adding that a fundraising drive led by both he and Kurasaki earlier this year provided the necessary funds to digitize the remaining images and print all 100.

Neither Boch nor Karasaki could definitively say why Lee came to the county.

“San Juan was fairly well established among a network of Japanese communities throughout the region,” he said.

Perhaps Lee, who extensively photographed the Japanese-American population of Southern California in the days leading up to their internment, thought to cover Northern California enclaves, too, Kurasaki suggested.

Boch surmised that Lee’s week-long visit in San Juan and the surrounding area was an effort to provide the public with a sense of the impact the president’s directive was to have on rural California, especially in communities where Japanese-Americans were such an integral part of the agricultural-based economy.

Among the images captured by Lee are several chronicling a picnic at the Japanese Hall, including one showing two women preparing the day’s meal in the building’s kitchen as the American flag hangs from a set of cabinets behind them.

The photo of the men chatting beside their cars was taken outside the hall, said Kurasaki.

And he counts the image as one of his favorites.

“It has a great vibe. The old vehicles and the young men having a serious conversation about what’s happening around them.” Kurasaki said.

Lee’s collection also includes scenes of Japanese-American school children. In one, a young boy stares into the camera, while clutching a small cart full of scrap metal—a demonstration of his commitment to the war effort. Behind him stand his female classmates holding American flags.

Another set of pictures show Japanese-American farmers and laborers harvesting their last crop in the San Juan Valley.

Among the most poignant photos were those taken at the San Juan Cemetery, where several men are seen cleaning gravesites—a final act of respect for their departed loved ones and a recognition that their future remained uncertain.

For Boch, these particular images show that Lee was a talented photographer who cared about the subject.

“He was a humanitarian. He captured the humanity of his subjects and the dignity with which they dealt with the situation,” he said.

Kurasaki, who will be on hand to answer questions on Saturday, said that he believes Lee’s camera work will spur descendants of those photographed to learn more about their own history.

And citing the 1944 Supreme Court decision in Korematsu vs. United States—the legal ruling that upheld the constitutionality of the internment of over 100,000 Japanese-Americans during wartime and one that has never been overturned—Kurasaki said that he hopes the photo collection reminds the general public “that U.S. government still has the power to suspend the rights of its citizens based on their ethnicity.”