HPD said damage to city camera system at Briggs Building in excess of $1,300. 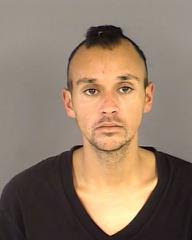 In a Sept. 1 press release, the Hollister Police Department said that officers arrested a local transient on Aug. 31 for vandalism of city property and assault on an officer.

The city of Hollister IT manager reported electronic equipment and part of the city camera system being vandalized for the second time in the month of August. The release said the most recent vandalism was in excess of $1,300 in damage and it occurred just after midnight on Aug. 30. Video of the crime and images of the suspect were obtained and passed on to Officer David Anderson, who opened an investigation.

Lucatero was booked on the charges of felony vandalism, two counts of burglary, assault with a deadly weapon, battery on a police officer, possession of a controlled substance and possession of burglary tools. He is also suspected in a previous vandalism that occurred at the same location on Aug. 18 and is being investigated in connection to another downtown business burglary.

Anyone with information regarding these investigations is requested to contact the Hollister Police Department at (831) 636-4330. Persons wishing to remain anonymous may call WeTip at (800) 78-CRIME. Information provided to WeTip may qualify for a reward.