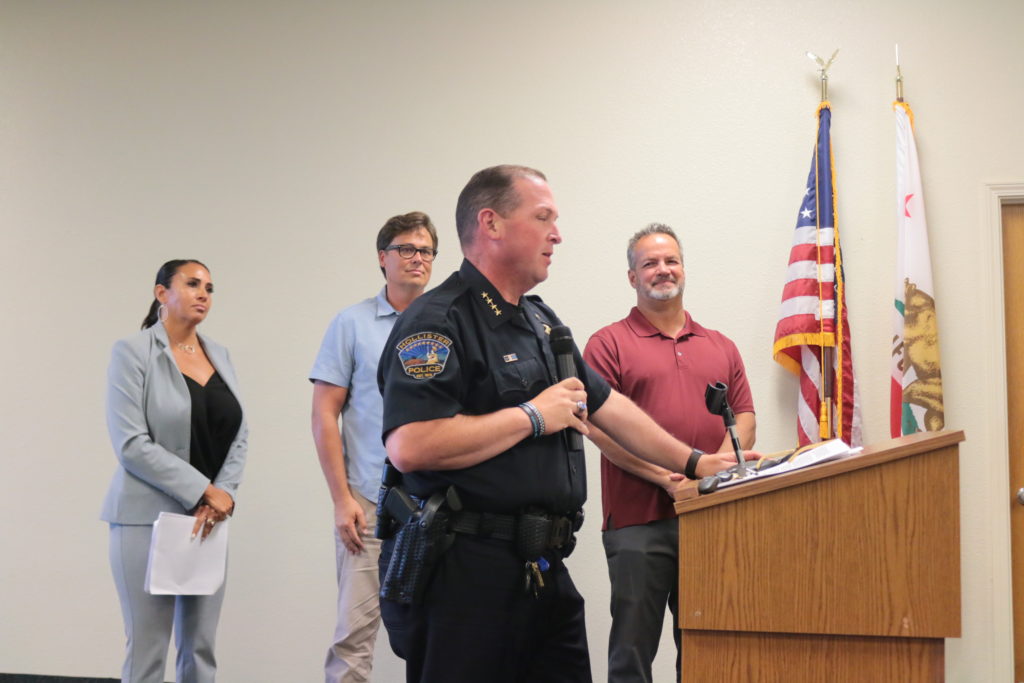 Three middle school principals gave a report on the value of the School Resource Officer program at the July 23 Hollister School District Board of Trustees meeting.

Calaveras Elementary School Principal Ken Woods said the three had talked to all district principals and site administrators for the presentation. Embodied in the agreement between Hollister School District and the Hollister Police Department, the goals of the SRO program include:

Woods said everyone he spoke to, including teachers, students, parents and his own children, was impressed with the SRO program.

“It’s amazing to have our police officers involved in our schools,” Woods said. “When I first used to see a police car in front of a school I thought “oh, no,” and that’s completely changed now because they’re there to support all of us. Having a relationship with them is so valuable and they really interact with the kids. The kids feel safe.”

Woods sees school resource officers as part of the team and described them as educators, counselors and mentors, as well as law enforcement officers.

Scott Wilbur, principal of the Accelerated Achievement Academy, said Carlton University did a study involving over 1,400 students, community members, school administrators and law enforcement that found having school resource officers on campus improved overall relationships. He said SROs can also help reduce property damage on and off campus, and their 911 calls can be answered immediately because the officer is on campus.

Diana Herbst, principal of Marguerite Maze Middle School, said SROs are particularly helpful when there is a 5150 incident, the California code for temporary, involuntary psychiatric commitment.

“They’re the first person you contact because they’re right there,” Herbst said. “They are able to assist in any emergency.” She added there it is less likely a student will end up with a criminal record. “This goes back to building relationships.”

“It’s bad for our kids to hear some of that stuff,” Woods said, “because it’s not true. To have them come in here and be our heroes and be someone they know, and see them face to face is amazing. It’s changing the culture and it’s good for the kids to see that.”

Herbst spoke of how Officer Julio Martinez started a positive group at Rancho San Justo Middle School for Latino boys, meeting with them over the course of eight weeks.

“He talked to them about respect, responsibility and having life goals,” Herbst said. “They became comfortable with him and knew if they were having an issue at home they could go to him. He was a person they could trust.”

Herbst noted that the highest suspension rate is among Latino males.

“If we can have a positive role model SRO to start these positive groups with our male Latinos, that’s what we need to do,” Herbst said.

Hollister Police Chief David Westrick told the board that SROs receive training to help them communicate with kids on gang resistance, bullying and manners. He said there are two SROs with Hollister School District and one at San Benito High School who are interchangeable.

“If you have an incident at one of the schools that requires more than the two, I will pull the third one over there to make sure that’s covered,” Westrick said. “This makes it more efficient for all the schools to have a higher level of safety all the time.”

“When I became chief here I knew we had to have them because I knew the value of them,” Westrick said.