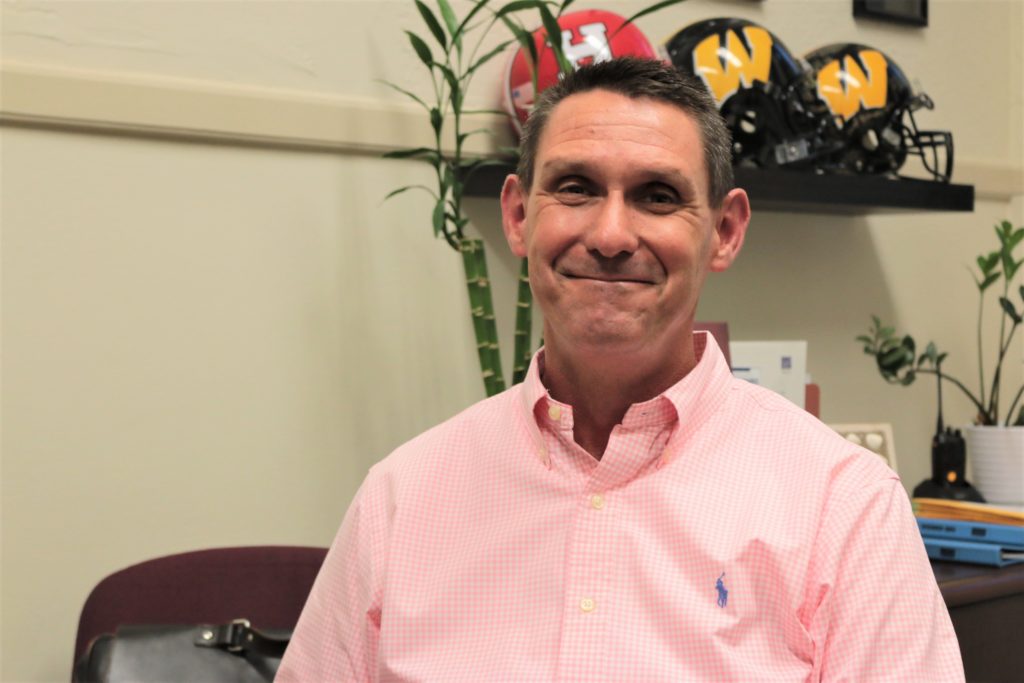 SBHS Superintendent Shawn Tennenbaum said he wanted an opportunity for the district to share with Benitolink as much about the investigation as possible. Photo by John Chadwell.

The high school district’s legal counsel, Loren M. Carjulia, said the district had to be careful that it did not give any details about the nature of the accusation or the reprimand. Photo by John Chadwell.
×

Two months after an anonymous letter was sent to the San Benito High School Board of Trustees and parents of students enrolled in the school’s special education program, Superintendent Shawn Tennenbaum met with BenitoLink to discuss the school district’s investigations of allegations of inappropriate sexual conversations and a pornographic video shared by an aide in a special education classroom.

BenitoLink requested comments for its June 26 article on the allegations, and the district did not respond until Aug. 9.

“The district could not share the results of the investigation with the public for student and staff confidentiality reasons,” Tennenbaum said.

A third letter was also sent in June by special education teacher Ann Vasquez, who told BenitoLink she was not aware of the two anonymous letters when she wrote hers.

After the second anonymous letter became widely known, Virginia Gardner and Susan Villa, mothers of special needs students at SBHS, and education advocate Kim Taylor appeared before the San Benito High School Board of Trustees on June 25 to voice their anger and concerns about the alleged behavior and the fact that the district had not informed parents.

“Obviously, the claims made in the letter are beyond disturbing,” Gardner told the trustees. “How can my son, or any other child, continue to learn and grow in a hostile environment? Why are our children being exposed to explicit adult content? How can the administration continue to ignore the liability issue?”

No other employees were found to have acted inappropriately, Krokower said.

But in June, the district received two nearly identical letters—one anonymous and the other signed by Vasquez—containing allegations similar to the January letter.

Tennenbaum said it was unknown if Vasquez’s letter and the anonymous letters were written by the same person.

Vasquez, however, believes Tennenbaum suspects she wrote the anonymous letter and that the district is retaliating against her.

“I’m currently under investigation,” Vasquez said. “Someone made a formal complaint. The union will need to get me a lawyer.”

Vasquez told BenitoLink she did not write the anonymous letters.

Krokower would only confirm that one person was reprimanded; she would not reveal the person’s name, what the person did, or the nature of the reprimand.

In the anonymous June letter, though, the writer claimed that the aide under investigation told others in the special education classroom the reprimand amounted to a “slap on the wrist.” The second letter also mentioned claims of bullying and retaliation by others against employees who tried to report the incidents.

Tennenbaum said the investigation focused on whether or not students were ever in danger. He said that while something did happen, “no student was ever jeopardized.”

Carjulia said the district had to be careful not to give any details about the nature of the accusation or the reprimand because the public could use “reverse detective work to figure out which employee was being referred to.” This, he said, was why the district would not disclose the findings of the investigation to the public.

“It was an internal investigation document that impacts heavily on employee and student confidentiality,” he said. “There’s no legal authority that we would have to turn that over.”

CDE, though, notified the district after Taylor and others contacted the department regarding the accusations. CDE did not pursue the case, and Taylor told BenitoLink that she also spoke to San Benito County Child Protective Services, which advised her to report her concerns to the Hollister Police Department.

HPD Detective Bo Leland conducted an investigation and said no criminal charges would be filed, but the investigation would remain open in case more information became available.

Tennenbaum said parents of special education students at the high school weren’t told of the accusations made in the January letter, or of the investigation and its findings, because of confidential privacy rights of employees, and because what did occur was “strictly adult-to-adult.” The anonymous letter writer, though, claimed that students were present when the video was shown, and there was also sexually explicit language. At least one student, who is considered nonverbal, repeated inappropriate words, according to his mother Virginia Gardner.

Gardner told BenitoLink that she continues to have trust issues with the high school administration and wonders how it intends to keep parents informed.

“I am also concerned that the aide in question is being placed in a mainstream environment where she will continue to be around other students,” she said. “I will work along with other parents for legislation to get cameras placed inside disabled classrooms. I am concerned and I’m going into the new school year with a level of resentment.”

Tennenbaum would not say whether any parents were questioned during the investigation. He did say that Krokower “reached out to a plethora of folks and if parents needed to be contacted, they were.”

Multiple sources have said there is a hostile work environment under Tennenbaum’s leadership and that some fear he may retaliate if they speak out publicly. Tennenbaum described working conditions at the high school as a “vibrant school culture with long-standing employees.”

“I’ve been here a long time and I think we can all attest that we’ve got more people communicating with each other, more people collaborating, more professional development, more opportunities,” he said. “People are truly invested.”

Responding to claims that he has retaliated against teachers and staff in the past, Tannenbaum sidestepped the question and said the culture at the school is one of providing opportunities to people, a sense of fairness and being consistent and transparent.

“We didn’t have to do this [interview] with you,” he said. “We wanted to. My position as the superintendent is to listen, to be open, to collaborate. We’ve given opportunities far above what we’ve done previously to gather input and follow through. That’s a testament to the school community as a whole.”

Tennenbaum said he did not know what action, if any, would be taken if the anonymous letter writer was to ever come forward publicly or be outed. He said, though, that during the investigation a wide net was cast to include people on and off campus to determine if the claims had any merit. He said his main concern was whether the allegations were factual.

“Based on everything, we’ve concluded there’s not congruence there,” Tennenbaum said. “At this point, we don’t know who that person is, but the credence that’s given to anonymous allegations is scary.”

Education advocate Taylor said she has experienced what she considers retaliation. She said SBHS Special Education Director Paulette Cobb contacted the National Special Education Advocacy Institute to report her for unethical behavior. She said NSEAI let her know that Cobb had made the accusation.

“They sent her a form with 23 questions that she would have to answer and provide proof of each one,” Taylor said. “I don’t think she will do that. It’s too much effort.”

Tennenbaum said Cobb’s call to NSEAI was only an inquiry.

“We don’t know what the roles and responsibility of a national board-certified advocate would be, so it’s good information to have,” he said.

Taylor said her original complaint to CDE was denied and she intends to refile it. She has also contacted a San Francisco attorney who is advising parents to file individual due-process complaints alleging the “denial of Free and Appropriate Public Education (FAPE) due to hostile learning environment and deprivation of educational benefits because of the distraction caused by the employee in the classroom.”

Seth Rosenberg of San Francisco-based Emergent, a personal injury attorney who also specializes in representing special needs children injured emotionally or physically at schools, said he had been retained by one of the parents of a special needs child enrolled at San Benito High School. He said while he only represents one family at this time, he will be open to hearing from any other concerned parents.

“It wouldn’t be a class action suit,” Rosenberg said. “It would be individual actions that each family could bring against the school district. This is obviously an issue that impacted a number of children and it needs to be investigated and rectified.”

The next San Benito High School Board of Trustees meeting is set for Aug. 13 at 7 p.m.