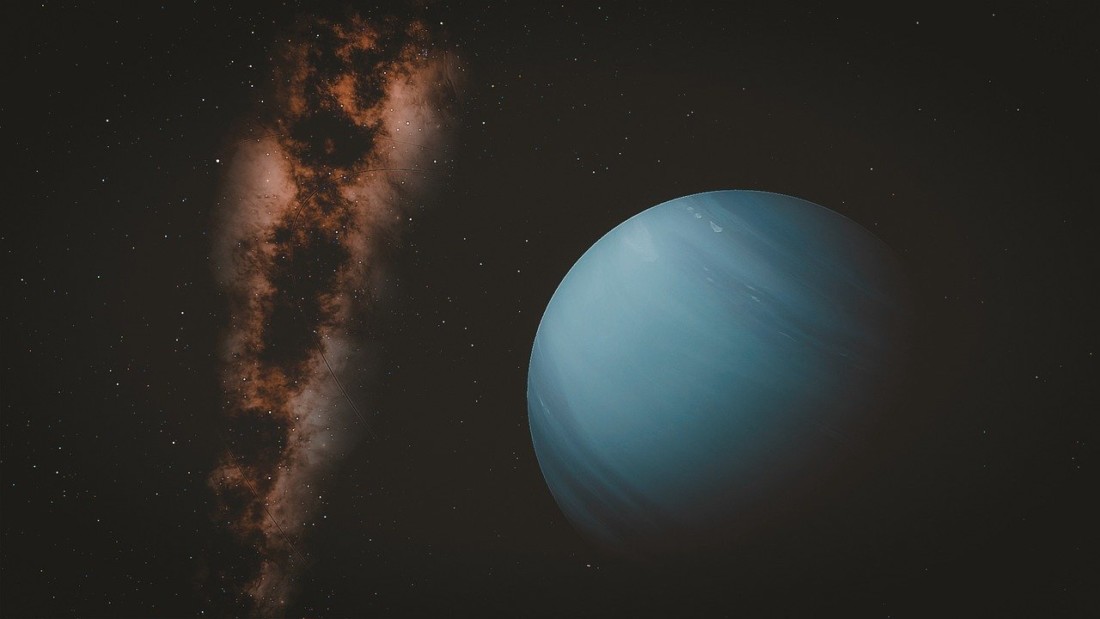 Two of the most unknown planets in our solar system are the two large gas giants of Uranus and Neptune. Very large in size but so far in distance that it makes both planets hard at best to view from the amateur astronomer’s back yard. Each has a greenish tint to them, making it somewhat easer to distinguish from the stars. But each can be viewed with binoculars if one knows where to look.

On the night of March 13, 1781, William Herschel made history when he accidentally stumbled upon a round greenish object in the constellation Gemini. At first he mistakenly thought that he had discovered another comet, for it was moving slowly across the sky not unlike a comet would do. Upon further analysis Herschel realized that he had indeed discovered a planet beyond Saturn. The planet later on came to be known as Uranus, which just happens to be, in mythology terms, the Father of Saturn. Saturn’s Mother must have been a beauty to produce such a gorgeous mythological planet such as Saturn, our wonder of the solar system, to offset the blandness of the Father. Kind of reminds me of my children (you may want to give that some thought).

Today we know that Uranus is the third largest planet in our solar system, behind Jupiter and Saturn. Uranus measures some 32,000 miles across; compare that to our own Earth at 8,000 miles. Uranus is over 19 times farther away from the Sun than the Earth. The Sun’s light takes some 8.5 minutes to get to the Earth. At Uranus’ distance the light from the Sun would take around 2.6 hours to reach the gassy planet. And remember; light travels at 186,000 miles per second. (With that information can you figure out how far from the Sun Saturn is?)

By the end of the 18th century, astronomers were becoming confused with the orbit of Uranus. Uranus was the only planet that did not obey the planetary rules, as we knew them. The astronomers had figured that some object beyond Uranus was causing the unusual path of this planet. And then on the night of Sept. 23, 1846 at the Berlin Observatory, Johann Gottfried Galle discovered Neptune.

What we knew of this new planet was somewhat limited at that time. But things changed in August of 1989 when Voyager 2 flew by Neptune to reveal the unknown. We now know that Neptune’s atmosphere is a colorful turquoise. Voyager’s camera revealed a dark Earth size spot similar to the Great Red Spot on Jupiter. Also revealed were thin irregular rings around the planet, a smaller version of Saturn’s, as well as six new moons to add to Triton and Nereid. Neptune is somewhat more than 30,000 miles across in diameter and more than 30 times farther away from the Sun than our own Earth.

Right now you can find Uranus and Neptune in the constellations Cetus and Aquarius, respectively. So now you can locate them for yourself, find the actual location of each in any one of the many astronomy magazines, such as “Astronomy” and “Sky and Telescope.”  Of course if you have a Go-To equipped telescope, which I am fortunate to have, your scope will take you right to it. It is almost like cheating. Many of the old timers feel if you can’t navigate around the heaven on your own, you are not doing yourself or the craft justice. I must admit that I do enjoy the star-hopping method from time to time; it certainly is more of a challenge. But the main goal here is to find your object. Who really cares how you get there? No disrespect to the old timers. Hey wait a minute, I do believe that I fall into that old timers category. Oh well, life goes on.

I’m sure most of you have heard the story going around on the Internet that in September Mars will look bigger in size than the Moon. Well I hope by now you all realize that it was all hogwash. It is always hard for someone like me that believes everything he hears to disbelieve anything that is in writing. But this was just too much to swallow. I guess from now on I will have to do a better job of filtering what I read and hear than I have in the past.

By the end of October Mars will be at its best. Right now you can see Mars peeking up on the eastern horizon around 11:30 p.m. Each night the red planet will rise earlier until the end of this month you won’t have to stay up so late to enjoy it. If you have a four inch or bigger telescope try to see if you can pick out the South Polar Cap, and other surface markings.

Though Mars won’t be around forever, don’t feel that you have to hurry and see Mars right away, our neighbor planet will be in good view for a couple of months. Try taking some pictures of the red planet through your telescope and let me know how you do. As per my experience you will find out that it is not the easiest thing to accomplish. But don’t give up, you just may surprise yourself.

It’s not every day you get the chance to take pictures of the Sun without filters. But with all these fires going on West of us the smoke plays the role of the filter. You never know what you are going to see when you look up into the sky, day or night. 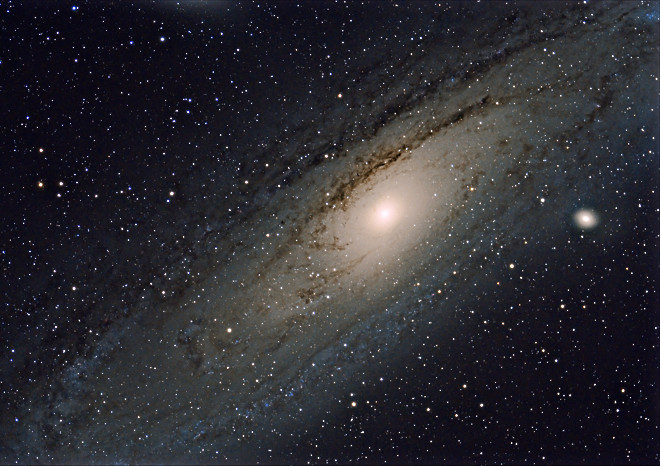 Searching the Sky: The Andromeda Galaxy

David Baumgartner writes about another galaxy two million light years away from Earth.

Searching the Sky: The show of giant planets

David Baumgartner writes that if not for the Moon, Jupiter would be the brightest object in the sky until Venus rises in the early morning hours at this time of year. 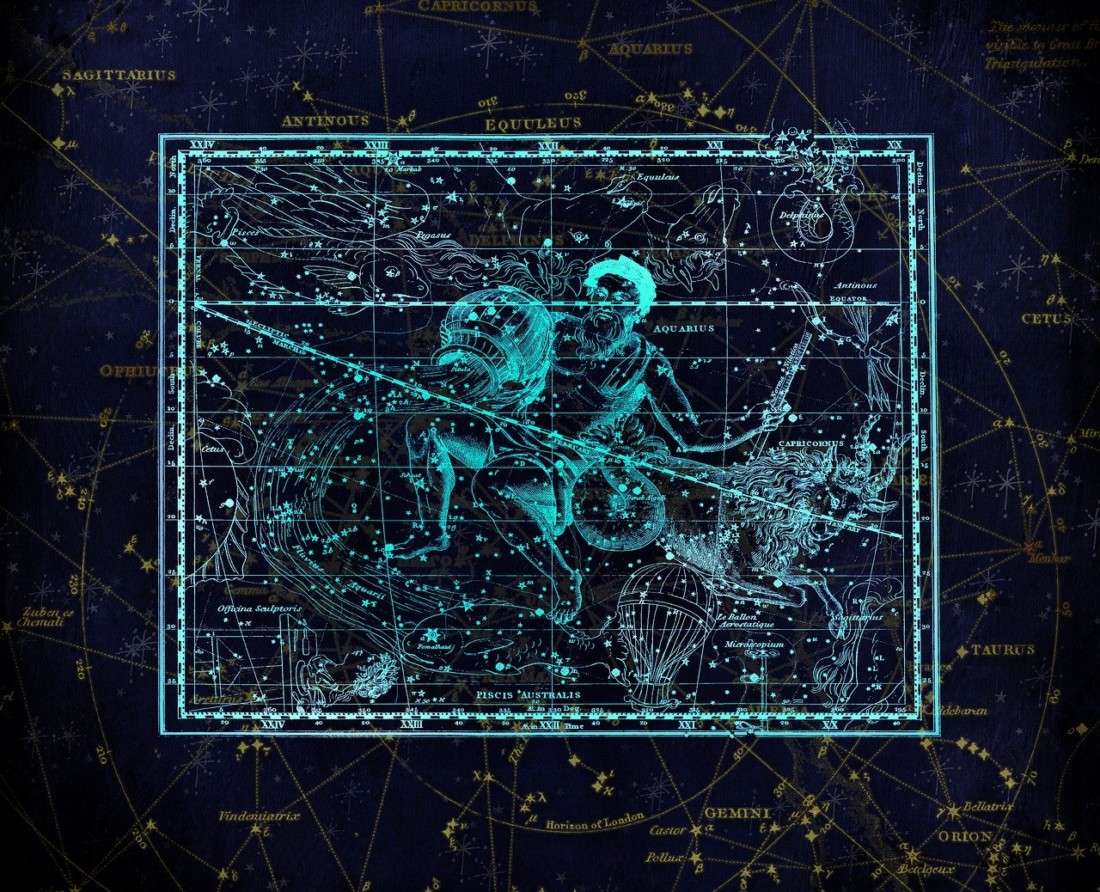 Constellation of the Month: Aquarius the Water Carrier

David Baumgartner writes about the constellation he calls Aqua-Man and about hosting a Tres Pinos School class to view Saturn.