The policy allows the city to display a commemorative flag only if requested by a council member and cleared by majority council vote. 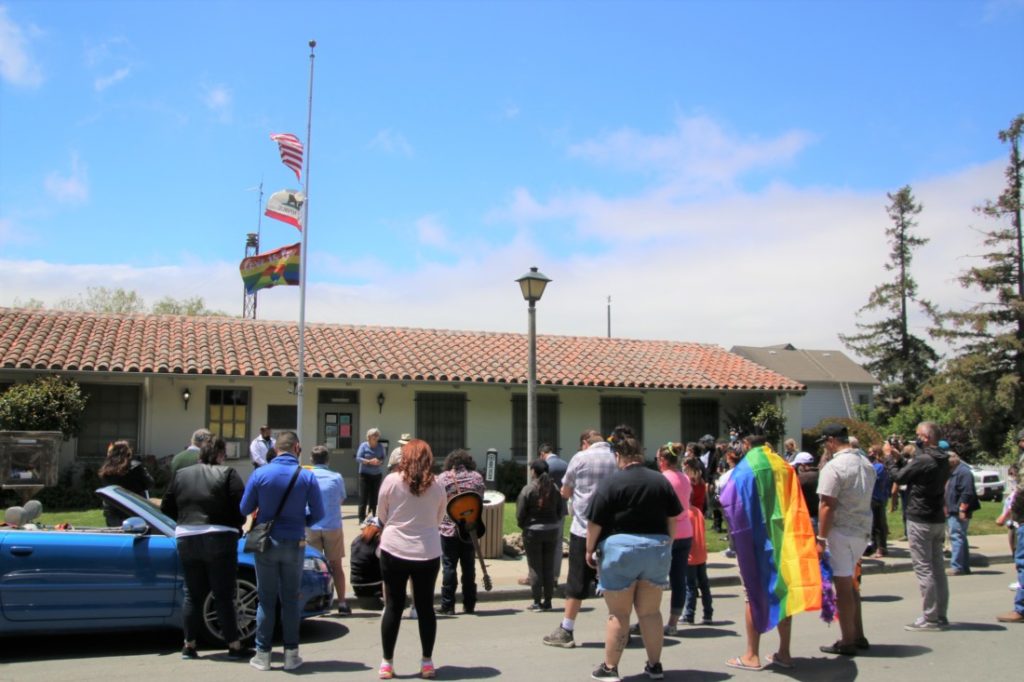 San Juan Bautista City Manager Don Reynolds said the city may have to put up another flag pole next year during the May 29 ceremony. Photo by John Chadwell.
×

The city of San Juan Bautista raised the LGBTQ flag for the month of June to mark Pride Month and remember the 1969 Stonewall Riot when people protested in the streets against the New York City Police’s raid on the local gay bar Stonewall Inn.

Though the flag wasn’t controversial the way it became in Hollister, on July 13 the San Juan Bautista City Council braced against any future opposition by approving a broad policy on flags flown at City Hall and city-owned buildings.

Raising a flag without a policy was problematic, City Attorney Deborah Mall said, because it would force the city to display any banner that a resident might request.

“You could do any kind of speech there and the city would have to accommodate that speech without having a policy in place,” Mall said.

The policy, approved 4-0, establishes that the city considers displaying a commemorative flag only if it is requested by a council member and that it must be approved with a majority vote. The city received no other flag requests following its display of the LGBTQ banner as approved on May 29, the assistant city manager said.

A commemorative flag is defined by the policy as “a flag that identifies with a specific historical event, cause, nation or group of people that the City Council chooses to honor or commemorate consistent with the City’s mission and priorities.”

Flags that are not allowed to be displayed, according to the policy, are religious flags, political party flags and flags advocating an election outcome. The policy, however, does not address controversial emblems such as the Confederate or Nazi flags.

Mall said the city is allowed to display flags as government speech under the First Amendment.

“If we make it government speech so it’s just the speech or the ideas of the City Council then we can limit it that far,” Mall said, suggesting that the city wll support the sentiment behind each flag it displays.

None of the council members raised any objections but Councilmember Scott Freels, supported by John Freeman, said he preferred adding another flag pole at the Carl Martin Luck Memorial Library to display commemorative flags. Freels said since City Hall sits on land donated by the Nyland family, the parcel serves as a memorial to Arthur Nyland Jr. who was killed in action during WWII.

“He was the second native son of San Juan to pass, and I see that flag pole as a memorial to him, the one on City Hall,” Freels said.