After being defeated by voters last year, the Strada Verde project will go through the normal planning process with the hope that county supervisors will approve it. 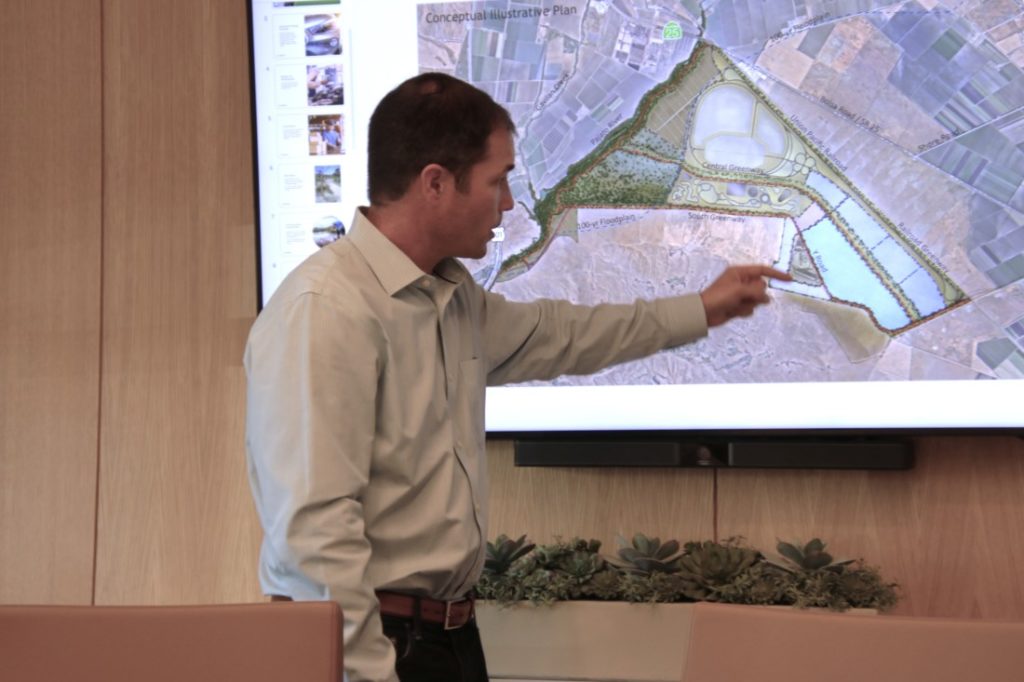 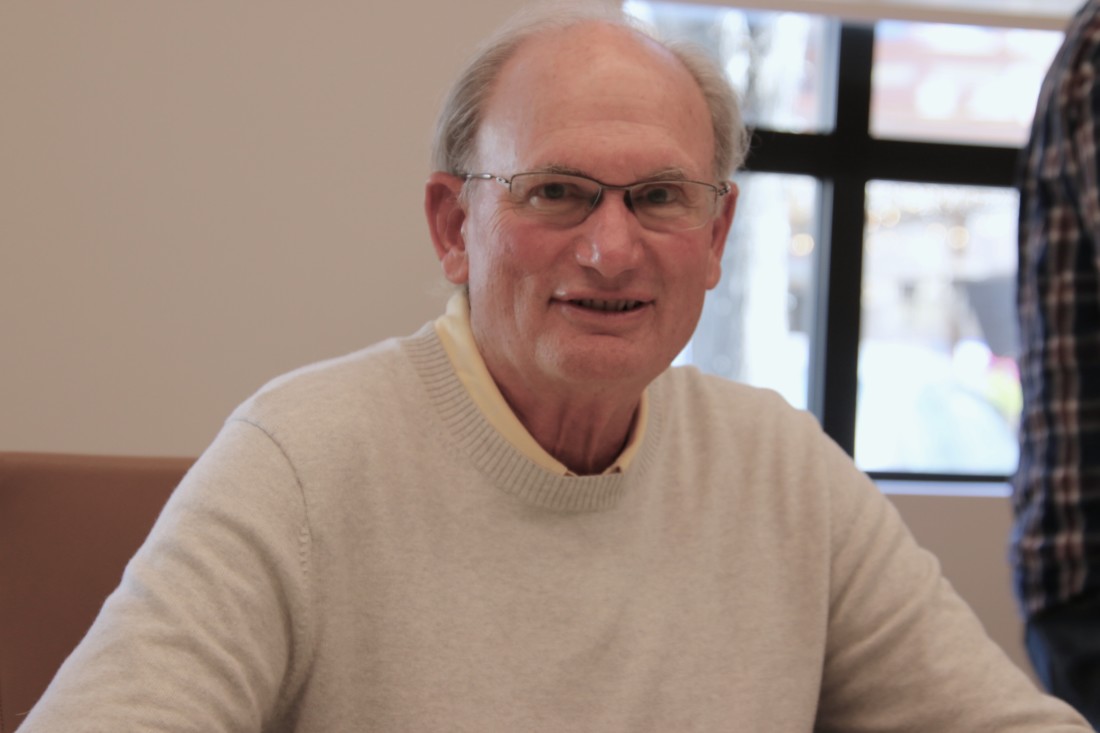 Scott Fuller said the primary differences in the project are the main entry point, environmental considerations and substantial renovation of Veterans Park in Hollister. Photo by John Chadwell. 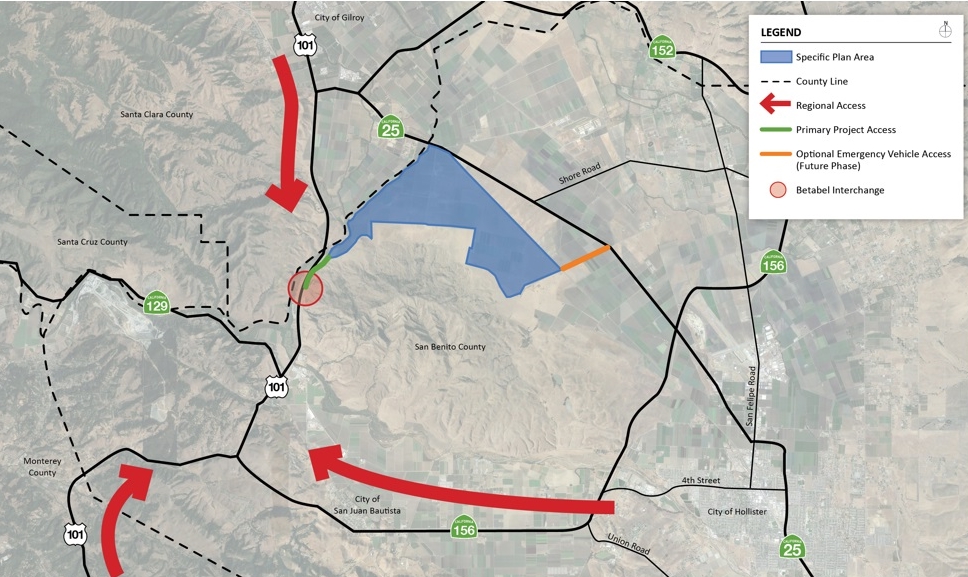 Access into the Strada Verde project will be from Highway 101 at the Betabel Road offramp. 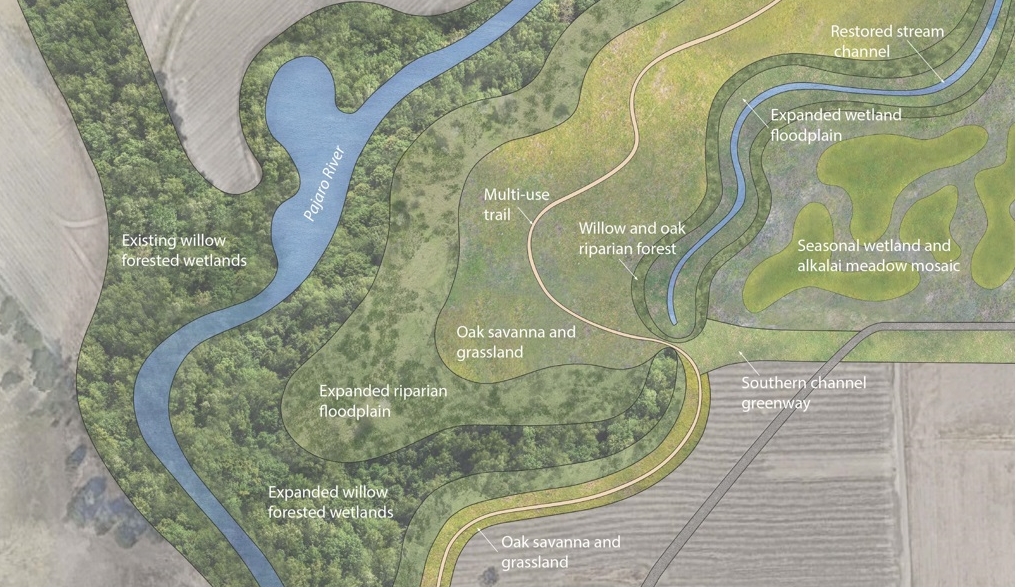 A 2.5 mile hiking trail along the Pajaro River runs through the project.

A multi-million renovation of Vets Park will demonstrate the project's long-term commitment to the community. 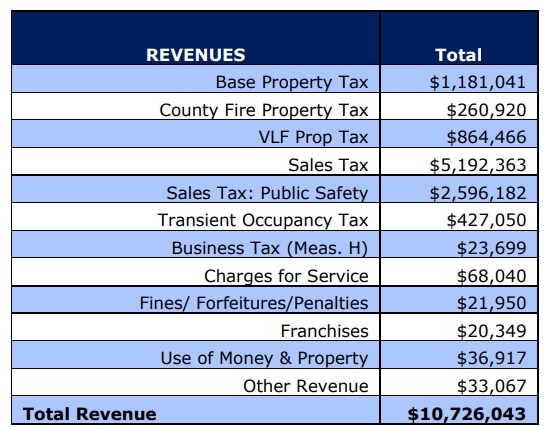 Expected Revenues from the project.

The 2,770-acre Strada Verde Innovation Park, described as a research and development project for autonomous vehicles with 27% of construction going toward e-commerce and distribution warehouses, was presented to voters as Measure N (see PDF) and defeated in 2020.

However, just because voters rejected it does not mean the project is dead. Trying another tack, the project’s backers are now taking it through the normal planning process. It now includes a promise to fund a multimillion-dollar renovation of sports facilities at Veterans Park in Hollister.

Four out of five supervisors have spoken in favor of the project. District 2 Supervisor Kollin Kosmicki said he remains neutral.

Newport Pacific Land Company, the Southern California residential and commercial real estate developer behind Strada Verde, has been working on a new environmental impact statement (EIS) and some changes. Despite claims made in the 2020 campaign season by Protect Our Rural County (PORC), the Strada Verde plan does not include a housing element, according to the county’s evaluation of the plan. A new EIS was required because the project now includes several environmental mitigations.

The plan would rezone 2,269 acres of Agriculture and 275 acres of Rangeland to Industrial. The remainder would remain as agricultural or wildlife preserves.

According to Jose Fernandez, who coordinates community outreach for Strada Verde, slow-growth advocates, including Hollister Mayor Ignacio Velazquez, continue to spread the false rumor that the project will include housing. “The mayor seems willfully misinformed,” Fernandez said. “Our application to the county includes no housing, and if our project is ultimately approved by the county, no housing will be permitted as part of that approval.”

Valezquez has posted at least two videos on Facebook and Instagram where he endorsed Dom Zanger and Rolan Resendiz for county supervisor and claimed, “Supervisor Bea Gonzalez, at the Board of Supervisors, is trying to get two more votes so they can build hundreds and hundreds of homes along Fairview and a whole new city along Hwy 25.”

Fernandez said Velazquez “does the public a disservice. In point of fact, our project is a comprehensive research and testing ground for electric and autonomous vehicles and related businesses.”

After the final draft of the environmental impact report (EIR) is completed and after 45 days for comments from the involved parties, it will go to the San Benito County Planning Commission for public comments, according to Abraham Prado, the county’s assistant director of planning and building. From there it will go to the Board of Supervisors for a vote. Regardless of the vote’s outcome, both opponents and proponents can appeal.

The Strada Verde team announced a new EIR at two public meetings April 27 and 28. Assistant County Council Joel Ellinwood said there are two separate processes for dealing with land use maps, one being the initiative process in which Measure N was defeated. The other is the normal planning process, which is the way Strada Verde is now going. The county has started the California Environmental Quality Act (CEQA) investigation, after which the project will go to the Board of Supervisors for a vote.

The CEQA investigation is expected to take three or more months to complete.

A major component of the strategic plan this time around is to better inform the public to counter claims made by the slow-growth advocates.

The strategy is to deliver the Strada Verde message through multiple meetings and tours, along with mailings and possibly television and radio ads. Also, a new welcome center will open by July in the old Rancher’s Feed building in Hollister, where a local team will meet with individuals and hold presentations.

The local team consists of Scott Fuller, formerly the general manager of San Juan Oaks Golf Course and Club, who has been a consultant for the project for the past two years; Fernandez, who was unsuccessful in his 2021 bid for Hollister City Council, District 1, said he was hired as the first full-time employee six months ago to work as community liaison; and Matt Van de Ahe, is the director of strategy and business element for Newport Pacific Land Company..

An informational meeting was held for BenitoLink staff on April 27, at which Fuller said that the overall facility plan, as well as the number of jobs and expected revenue, have not changed. A major change, he said, is that there will no longer be a secondary entrance to the site from Hwy 25. Instead, the only public entrance will be at the Betabel off ramp from Hwy 101. There will also be a road at the southern tip of the project for emergency vehicles only.

The other improvements are all environmental, Fuller said. Particular attention will be paid to stormwater management and the portion of the Pajaro River that runs through the project.

“When we do our stormwater management throughout the site, we’re not using your typical huge storm water pipes,” he said. “We’re doing open ditches that are more environmentally sound. There will also be some greenway along these storm water areas.”

He continued: “We’ve upped our game on the biological and environmental preserves. We’ll enhance the wetlands and riparian habitat along the Pajaro. We’ll work with the California Department of Fish and Wildlife to do new plantings, and to manage them to make sure they survive.”

Fuller added that the project includes the creation of two biological preserves to protect the California Tiger Salamander and other wildlife.

“We will be working with Fish & Wildlife or local land trusts to manage them,” he said. “Also, 227 acres will be set aside with an agricultural easement and permanently preserved. We’re proposing a publicly accessible 2.5-mile trail near the Pajaro River.” Fuller said,” It will have a multi-use trail and we’re working to connect it to other proposed trails in the region.”

Fuller said parking for the trail will be near the Santa Clara-San Benito County line on Hwy 25. The public and workers will enter from Hwy 101 at the Betabel offramp. He also said the team will work on potential transportation issues with the county, Santa Clara County, and the state to accelerate the paying of fees.

“We’re working locally but also at the state level in an attempt to move up the payment of money to this area,” he said. “Our project is seen very favorably all the way up to the state level because it’s a huge element in the state’s push for electrification of automobiles. We’re working closely with Gavilan College and both high schools on a career pathway program for this technology.”

According to the county counsel’s analysis of the original project initiative that resulted in Measure N, which was submitted to the Board of Supervisors and county residents on August 20, 2020, if it had passed and been adopted it would have amended the county’s general plan and zoning code to accommodate the proposed 2,777 acres of agricultural and range land to allow for up to 455 acres with 750,000 square feet of light industrial and office development. Two hundred sixty-one acres would have been devoted to 5.8 million square feet of e-commerce logistics and distribution development; 31 acres with 115,000 square feet of business center, retail, hospitality, and civic development; 831 acres for automotive testing facilities; 209 acres of open space and park; 562 acres of agricultural preserve; 265 acres of greenway channels for drainage; and 163 acres occupied by street and drainage infrastructure.

According to the applicant, Bristol SB LLC, the project would have expanded and diversified the regional economy by providing a home for a new technology-based employment center and increased opportunities for new county tax revenue. It would have created over 18,000 direct, indirect and induced construction jobs occurring over several years. Additionally, it would have generated more than 5,500 direct, indirect, and induced permanent new jobs in the county, minimizing traffic impacts to Hwy 25. And it would have created a new park along the Pajaro River, while maintaining 562 acres for agriculture.

Estimated net annual tax revenues to the county’s general fund, according to the analysis, would have amounted to more than $7.9 million. Overall annual revenue to governmental agencies would have been $23.3 million at full buildout of the project, and would have generated nearly $6.5 million per year in additional sales taxes through Measure G and other allocations that would be administered by the Council of San Benito County Governments (COG) for use in funding transportation projects.

Gift to the community

Then there is the “gift to the community and a symbol of our long-term commitment,” as Fuller described it. He said the project will fund a multimillion-dollar renovation of Veterans Park, noting that the advantage of large commercial projects is that they can give back to the community much more so than smaller commercial or housing projects.

He said meetings had already been held with the various sports teams and the Veterans Commission.

“We’re proposing as part of our project that we will fund the complete renovation of Vets Memorial Park, with new fields and lighting,” he said. We included at least one baseball field for the general public, a swim center, a trail that goes all the way around, a dog park, concession stands, and hard courts for pickleball or tennis.”

He said there will be parking for 365 vehicles and through using turf rather than grass, costs will be kept down.

“It’s also part of our proposal to establish a CFD [Community Facilities District] on the Strada Verde property, which taxes the users of the property, and that money would be used to provide ongoing maintenance for 30 years,” he said. “We’re not committing yet to the entire maintenance but the lion’s share of it. We don’t want to spend millions of dollars and have it not maintained.”